Israeli ousted in second round in Paris • Federer safely through, Halep crashes out. 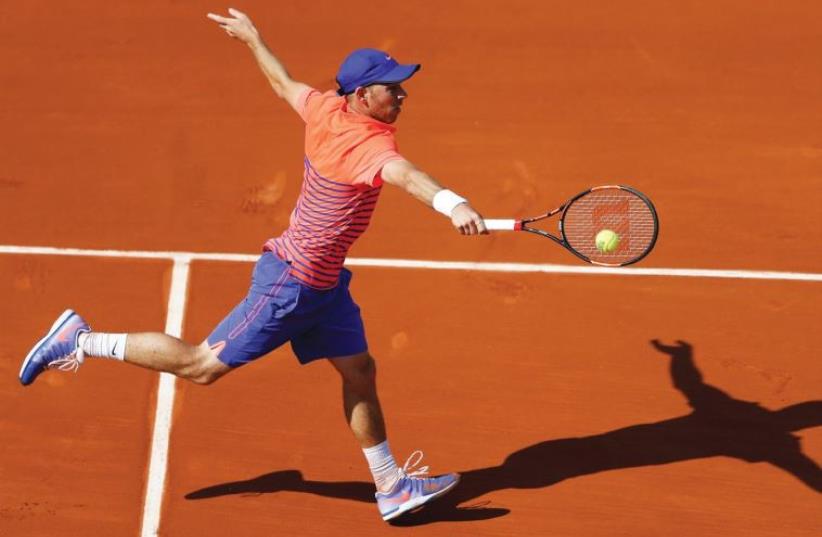 Dudi Sela
(photo credit: REUTERS)
Advertisement
Dudi Sela gave Jo-Wilfried Tsonga a run for his money for one set on Wednesday, but his challenge quickly faded after that, ultimately losing 6-4, 6-1, 6-1 in the second round of Roland Garros.The Frenchman, ranked No. 15 in the world, didn’t break Sela (91) until the 10th game of the first set, but he dropped just two games in total after that on his way to the third round.Sela, who was hoping to reach the third round of the French Open for the first time in his career, can at least console himself in the knowledge that he managed to win a main draw match in Paris for the first time since 2009.Roger Federer avoided any more security scares to move safely into the third round on Wednesday but danger lurks ahead for the Swiss, namely in the shape of Japanese firebrand Kei Nishikori.The perils of Roland Garros were in evidence in the women’s draw too where last year’s runner-up Simona Halep, the third seed, bowed out 7-5, 6-1 to Croatia’s Mirjana Lucic-Baroni to become the biggest casualty so far.The 33-year-old Lucic-Baroni – who made her French Open debut in 1999 as a 17-year-old but took a break from tennis before returning – also beat Halep in last year’s U.S. Open.“I didn’t feel my game. I don’t have a good feeling, that’s why I couldn’t change anything,” Halep, who will slide in the rankings, said.Maria Sharapova, who beat Halep in last year’s final, made short work of fellow Russian Vitalia Diatchenko, winning 6-3, 6-1 to set up a juicy third-round clash with Samantha Stosur.Stosur, the 2010 runner-up and twice a semifinalist, came within a game of serving up a “double bagel” over French wildcard Amandine Hesse but had to be content with 6-0, 6-1.While second seed Federer was beating Spain’s Marcel Granollers 6-2, 7-6 (1), 6-3, Nishikori took center stage on Court Phillipe Chatrier, and a straight sets win over Brazil’s Thomaz Bellucci offered further proof of his growing threat.Left-hander Bellucci is one of the form players on clay this year, but 25-year-old Nishikori passed the test with flying colors, winning 7-5, 6-4, 6-4 to reach the third round for only the second time.“I have a lot of confidence on clay right now, so I hope I can do well here, because I haven’t done so well before,” Nishikori who last year became the first Asian male to reach a Grand Slam final at the U.S.Open, told reporters.“I’m feeling really well after these two matches and winning in three sets against a tough player like Thomaz. I’m very happy to be going to the next round.”Bellucci, ranked 40, arrived in Paris full of confidence after winning the Geneva title last week, but the relentless Nishikori wore him down in a high-quality contest.Nishikori, who has 1989 champion Michael Chang in his corner, needed to be at full-throttle throughout though.Nishikori was broken twice, at 5-2 in the second and third sets, but neither proved too damaging as he moved through to a third round clash with Germany’s Benjamin Becker, who beat Spanish 32nd seed Fernando Verdasco in a five-set cliffhanger.There was no repeat of Sunday’s scenes when a fan ran on to court for a selfie with 17-times Grand Slam champion Federer, with the only trouble the Swiss encountered on Wednesday was a 4-2 second-set deficit which he quickly fixed.Federer, on collision course with Nishikori in the semifinal, will play Bosnia’s Damir Dzumhur in round three after he beat Marcos Baghdatis 6-4, 6-3, 4-6, 6-2.“I might even go so far to say I have actually almost never seen him play before,” Federer said of Sarajevo-based Dzumhur.Eighth seed Stanislas Wawrinka also made progress despite dropping a set against Serbian Dusan Lajovic as did respective French No. 1’s Gilles Simon and Alize Cornet.Twelfth seed Simon led the home charge, beating Martin Klizan 7-5, 6-2, 6-3 while Cornet beat Romania’s Alexandra Dulgheru 6-2, 7-5.It was a good day for the French with Nicolas Mahut beating last year’s surprise semifinalist Ernests Gulbis, Benoit Paire also taking out a seed, Italy’s Fabio Fognini and Gael Monfils overcoming Diego Schwartzman. On TV: French Open tennis early-round action (live on Eurosport at noon and from 6:45 p.m.)