World Golf Hall of Famer Amy Alcott found herself in the Holy Land this week for the first annual SHALVA Golf Tournament held at the Caesarea Golf Club. 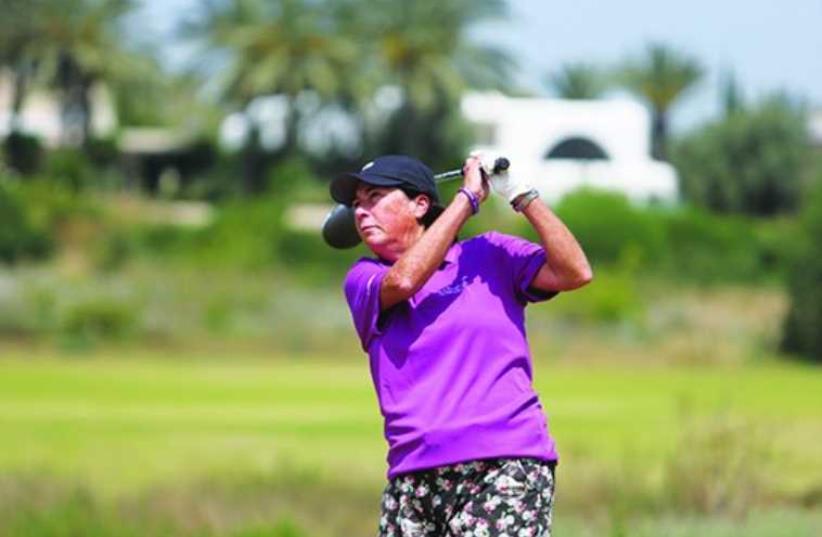 HALL OF FAME golfer Amy Alcott tees off at the SHALVA Golf Tournament this week in Caesarea
(photo credit: YOSSI KLAR)
Advertisement
It is quite difficult to say no to a request from SHALVA , the Association for Mentally and Physically Challenged Children in Israel.Which is how World Golf Hall of Famer Amy Alcott found herself in the Holy Land this week for the first annual SHALVA Golf Tournament, held on Monday at the Caesarea Golf Club.“A close friend of mine in the US – Jewish sports agent Arn Tellem – was involved in sponsoring the tournament, and when he reached out to me to come to Israel and be the honorary chairperson, I was thrilled to help bring attention to SHALVA internationally about the wonderful work they are doing,” said Alcott to The Jerusalem Post from SHALVA ’s impressive headquarters in Har Nof.(The new SHALVA National Children’s Center will open its doors in August 2015 in the heart of Jerusalem.) Monday’s tournament and awards luncheon in Caesarea featured more than 100 participants and raised vital funds needed to support SHALVA ’s programs, which provide quality care for over 500 children with special needs, empowering their families, and promoting social tolerance.The gold league tournament winners of the event were Itay Cohen and Yehuda Levy, with Victor and Jacqueline Goldner winning the silver league.During her 27-year career as a full-time member of the LPGA after turning pro in 1975 at the age of 18, Alcott was most recognized as one of the LPGA’s most creative shot-maker and her go-forthe- pin style of play was the bedrock for her 33 pro tournaments captured worldwide, including five major championships.These days, she still spend plenty of time around golf, as part of the upstart Women’s Legend Tour and also as a course architect, most notably a member of the team that designed the course for the 2016 Rio Olympics, when golf will be featured in the Games in 112 years.Alcott, who was raised as a reform Jew in Southern California, noted that her family’s surname used to be “Yalkut” before her grandfather Americanized it to “Alcott” in the 1930s.“I have not necessarily been an overly religious Jew, but I loved how I was raised and I am extremely proud of it. If my name was still Yalkut, it might have been a little more difficult for me, but I never experienced any discrimination as a Jewish woman golfer.”Among Alcott’s favorite golf partners is former US President Bill Clinton “I’ve played with Clinton six times. He came out in Sports Illustrated and said I was one of his favorite partners. He said that I shot a 31 on the front nine, but he gave me six putts.”Explaining the intense pressure that comes along with professional golf, Alcott quipped that “I used to tell myself that the sun will always come up tomorrow. Or that no matter what happens, my mother is still going to love me.”Involving herself with charities such as SHALVA is the most rewarding parts of Alcott’s work.“It is wonderful as a professional athlete to take your talent and be able to use it to expose things. To take your notoriety or fame and be able to help others,” she said.This trip was her second time in Israel after visiting two years ago as part of a peace initiative program.“I’d love to see Israel have another course and I’d love to be a part of making that happen. Israel really deserves to have more golf. It’s an international peacemaker.”