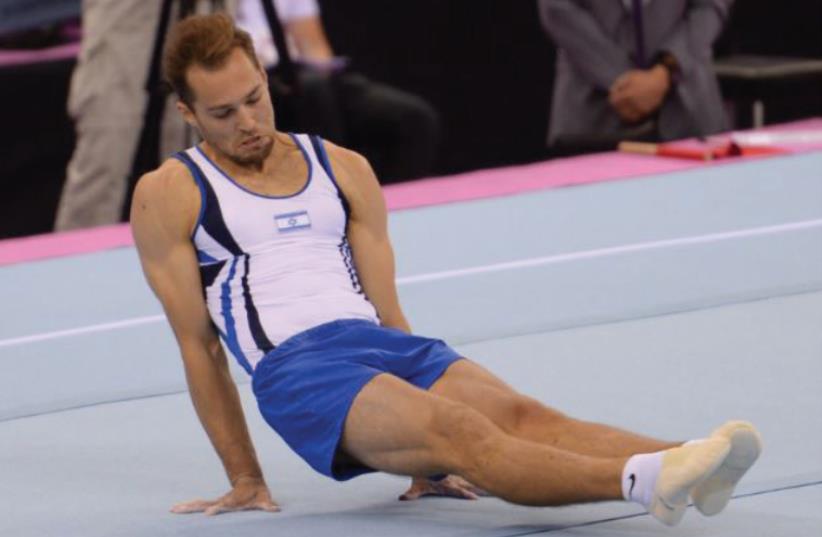 Israeli gymnast Alex Shatilov ended the floor final yesterday in fifth place.
(photo credit: OLYMPIC COMMITTEE OF ISRAEL)
Advertisement
Alex Shatilov came up short in his bid to win a medal at the European Games on Saturday, ending the floor final in a disappointing fifth place in Baku, Azerbaijan.Shatilov recorded a result of 14.833 in the final, failing to repeat his performance from the qualifiers (15.166), which would have been good enough to claim a silver medal on Saturday.“I didn’t do anything right and that is disappointing,” said Shatilov.“I got off to a poor start and my result was also affected by the level of difficulty, which was lower than in the qualifiers.”The 28-year-old Israeli has already turned his focus to his most important event of the year, the World Championships in Glasgow in September, where he will be able to secure his place at next summer’s Rio Olympics.“Everyone was mediocre in the final today and I was even worse,” said Shatilov. “However, I’ve had poor events in the past and recovered. I will continue working hard ahead of the World Championships.”Israel’s rhythmic gymnasts will aim to add to the delegation’s medal haul, currently at three, when they compete in five finals on Sunday.The national team of Yuval Filo, Alona Koshevatskiy, Ekaterina Levina, Karina Lykhvar and Ida Mayrin, which won a silver medal in the all-around final last week, will take part in the group final in the clubs and hoops, as well as the ribbons.Neta Rivkin will participate in three individual finals on Sunday.Rivkin finished the individual all-around final in ninth place on Friday while securing her place in three more finals.Rivkin registered an overall score of 69.8 and will participate in the hoop (17.8), ribbon (18.050) and ball (18.050) finals on Sunday after finishing among the top six in each apparatus.Victoria Filanovsky ended the all-around competition in 10th place (69.550) and failed to reach any of the apparatus finals.“For me this was another preparation event ahead of September’s World Championships,” said Rivkin. “I didn’t start off well in the clubs, but I gathered myself and I’m pleased with my overall performance.”Meanwhile, Russia continued its dominance of the gymnastics medals at the European Games with seven more on Saturday to take its combined tally to 16 in 18 events so far.At the stunning purpose-built National Gymnastics Arena adjacent to the Olympic Stadium, Russia has bagged seven golds, six silvers and three bronze medals.Aliya Mustafina won a gold and silver on Saturday in the women’s uneven bars and floor exercise finals, taking her gold medal haul to three for the championships.David Belyavskiy won silver in the men’s parallel bars and bronze in the men’s floor final.Nikita Ignatyev claimed silver in the men’s rings and bronze in the horizontal bar finals while Seda Tutkhalyan finished second in the women’s vault.There are still 16 gold medals up for grabs across the trampoline and rhythmic, aerobic and acrobatic gymnastic disciplines and Russia has athletes in the finals in every event.After eight days of full competition in Baku, Russia leads the table with 59 medals – 26 more than its closest rival Azerbaijan.Israel’s duo of Sean Faiga and Ariel Hilman were knocked out in the quarterfinals of the beach volleyball competition on Saturday, losing 2-0 (21-13, 21-15) to Martins Plavins and Haralds Regza of Latvia.