Sinai Says: A roller coaster of emotions for Muki

Muki did his best to hide the injuries during his preparations for the Olympics, but finally revealed their true extent on Monday. 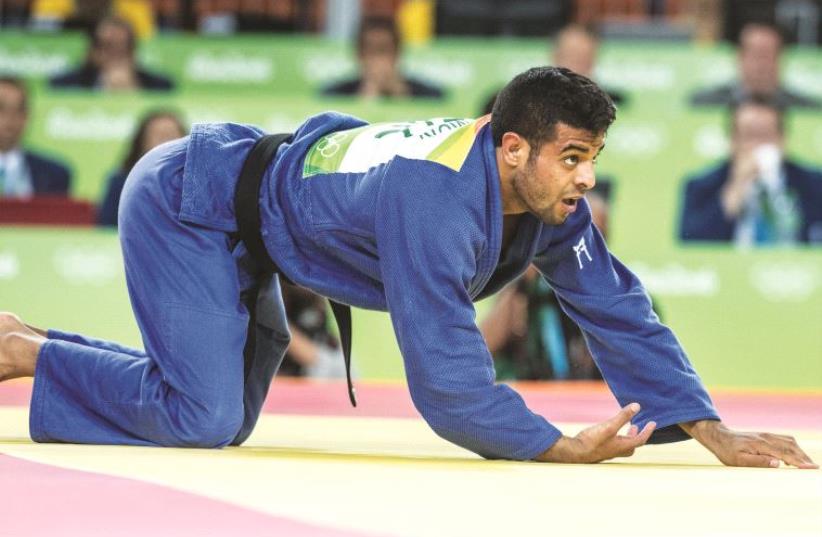 Israeli judoka Sagi Muki
(photo credit: ASAF KLIGER)
Advertisement
After a day of so many highs and lows, Sagi Muki sat slumped on an armchair and cried. There was little point in trying to console him.The agony of coming so close to claiming an Olympic medal, but ending the day empty handed was simply unbearable, far greater than the pain from the two slipped discs he suffered a month before the 2016 Rio Games and the two ankle ligaments he ruptured a month earlier.At one stage, Muki was a doubt to even travel to Rio, which makes his progress to the semifinals of the men’s judo under-73 kilogram event on Monday, all the more impressive.Muki was looking to become Israel’s first Olympic medalist since windsurfer Shahar Zubari took a bronze at Beijing 2008. He ended up missing out in heartbreaking fashion.After reaching the semis, he needed just one more win to scale the podium.However, he came up short against world No. 2 and European champion Rustam Orujov of Azerbaijan in the semis and was then beaten by Lasha Shavdatuashvili of Georgia – the Olympic champion in the under-66kg event in London 2012 – in the battle for the bronze medal.Muki did his best to hide the injuries during his preparations for the Olympics, but finally revealed their true extent on Monday.“I wasn’t able to train for three weeks,” he said. “I was unlucky and when I did finally return to training I couldn’t do so properly. My preparations were ruined, but I’m happy that I at least fought and never gave up.”It was a question regarding the support he received in Israel throughout Monday which brought tears to Muki’s eyes.“I knew that even with the pain in my back that I’m good enough to win a medal,” he said. “It is such a shame that the day ended like this. We have a loving and supportive people who are always behind me. I’m happy I was born in such a country. I hope I didn’t let anyone down.”Following the Israeli delegation’s underwhelming start to the Olympics, Muki’s performance was uplifting rather than dejecting.No one can, or will, question if Muki gave his all and his display should inspire the rest of the delegation for the remainder of the Olympics.Coming so near to an Olympic medal yet finishing so far away will haunt Muki for years to come. He will scrutinize every decision he made on Monday over and over.Laying those ghosts to rest will not be easy, but there is one sure recipe to do so. Minutes after the toughest moment of his career, Muki already set his sights on Tokyo 2020.He knows that a place on the podium at the next Olympics will transform what is today a depressing experience into a stepping stone to the highlight of his career.