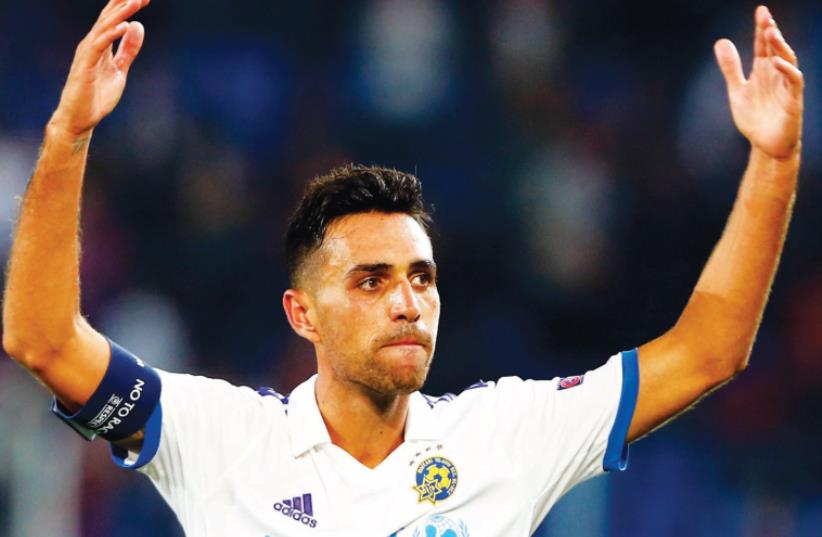 Eran Zahav
(photo credit: REUTERS)
Advertisement
After decades of disappointment, this was supposed to be the year the fortunes of the Israel national team finally changed.The year in which the blue-and-white at last reached its second major tournament, a first since the 1970 World Cup.Everything seemed to be in place for Israel to qualify for Euro 2016.Coach Eli Gutman’s grin caught on TV cameras during the draw which placed Israel in Group B with Belgium, Wales, Bosnia-Herzegovina, Cyprus and Andorra said it all.With 24 teams to take part in Euro 2016 in France, eight more than in recent European Championships, it seemed that this was an opportunity even the blue-and-white couldn’t squander. The nine group winners, runners-up, and the best third-place team all advanced directly, with the eight remaining third-place teams to contest home-and-away playoffs for the four remaining berths.After defeating Bosnia 3-0 in Haifa last November to open a campaign with three consecutive victories for the first time since joining UEFA 23 years ago, Israel seemed on course for a top-two finish, not to mention third place and progress to the playoffs.So how on Earth did it all go so horribly wrong? It all began to unravel with the 3-0 home defeat to Wales. The Welsh hadn’t qualified for a major tournament since the 1958 World Cup and Israel’s players have since said that they were over-confident ahead of that match. The painful return to earth was followed by a 1-0 defeat to Belgium in Jerusalem three days later.The national team never recovered.A 3-1 road loss to Bosnia in June further complicated Israel’s situation, and despite beating Andorra and drawing at Wales, Israel’s performances were anything but convincing.Nevertheless, it entered its final two qualifiers this month with its fate in its own hands, knowing that it could secure a place in the playoffs should it peak at the right moment.And then came match against Cyprus at Teddy Stadium.Rather than peaking, Israel hit rock bottom.Since joining UEFA , Israel has suffered its fair share of painful defeats.But the 5-0 loss to Denmark in the first leg of the Euro 2000 playoffs, the 1-0 home defeat to Latvia in World Cup 2010 qualification or the 4-0 hammering at home against Russia in Euro 2014 qualification all pale in comparison to the impact of the humiliating setback against Cyprus.Since defeating Bosnia in its group opener, Cyprus had lost all five of its matches against teams not named Andorra, including a 2-1 defeat to Israel in Nicosia.But Israel would capitulate in embarrassing fashion on Saturday night, suffering a defeat that ended any realistic chance of reaching the playoffs and will have far-reaching implications for the future of the team.For the national team not only buried its Euro 2016 campaign, but seemingly also extinguished any hope of qualifying for a major tournament any time soon.After all, if the blue-and-white couldn’t get the job done this time – when the circumstances were essentially as easy as could be expected – why should anyone believe it will be able to do so anytime in the near future? “This was a match we really should have won,” said striker Tomer Hemed. “A chance like this will not return any time soon. We need to analyze what went wrong, although that won’t help now. The national team hasn’t got the job done in a moment of truth for many years.”While previous failures were also heartbreaking, at least there was a sense that the national team was heading in the right direction. With the change in the tournament’s format, Euro 2016 looked to be Israel’s chance to embark on a new era.The magnitude of the expectations were reflected in the disappointment that followed the bleak defeat.Gutman will be gone in the coming days, but it is hard to see anyone else doing a much better job. There is only so much that can be achieved with the limited talent pool in Israel.With the Israel Football Association not having adequate financial resources to bring in a respected foreign coach, the names of Elisha Levy, Guy Luzon and Ran Ben-Shimon have been brought up in connection with the position that will soon be vacated.Whoever takes over is set to be handed a four-year deal, with even the most delusional Israel fan not really believing that the blue-andwhite has any chance of reaching the World Cup in 2018.Israel’s hopes were already all but dashed after being paired with former champions Spain and Italy in qualifying Group G. Only the winners of each group will qualify automatically, with the eight best runners- up to advance to home-andaway playoffs. Israel will also face Albania, Macedonia and Liechtenstein.Facing Albania will rub salt in Israel’s wounds, with even the small Balkan nation qualifying for Euro 2016 in what will be its first ever major tournament.Israel’s next coach will need to rebuild the side ahead of Euro 2020 qualification, ridding the squad of those who were so desperately poor this year, as well as the players who will be past their peaks by then.A long and an extensive overhaul is required and its results will only be known in four years.It is difficult to draw any positives from Israel’s miserable failure to qualify for Euro 2016. At least there are no longer any illusions regarding Israel’s true place in European soccer.allon@jpost.com