Sinai Says: Return to Israel a step in the right direction for untapped talent Assulin

Gai Assulin’s pro career only truly began on Monday, when he signed an 18-month contract with Hapoel Tel Aviv. 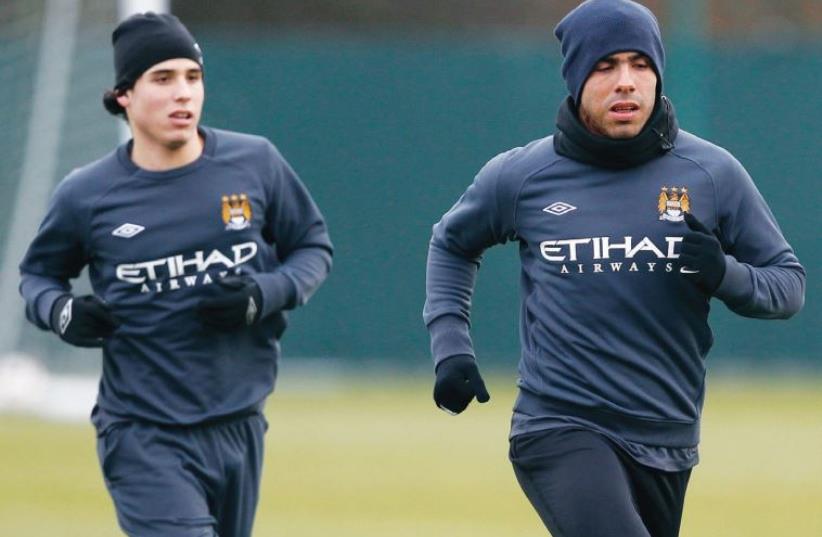 Gai Assulin (left) has trained with some of the world’s best players – including Carlos Tevez (right)
(photo credit: REUTERS)
Advertisement
Gai Assulin’s list of former teammates reads like a who’s who of world soccer.Leo Messi, Zlatan Ibrahimovic, Carlos Tevez, Sergio Aguero, Xavi, Iniesta and Yaya Toure are just a few of the high-profile names with which the 24-year-old Israeli shared a training ground during his time at Barcelona and Manchester City.However, in many ways, Assulin’s pro career only truly began on Monday, when he signed an 18-month contract with Hapoel Tel Aviv.Israeli soccer fans have been tracking Assulin’s progress since he was 12. In 2003, he left Beitar Nes Tubrok’s youth department for Barcelona’s fabled youth academy at La Masia, becoming local soccer’s great white hope.In August 2007, the attacking midfielder was handed his first professional contract, signing a three-year deal at the Spanish powerhouse.He spent almost the entire period playing with Barcelona B, which is part of the Spanish second division, making 67 appearances and scoring 16 goals.Assulin made his first-team debut in a Copa del Rey match against Cultural Leonesa in October 2009, but those 56 minutes ended up being his only action as a senior Barca player.The club and player announced in July 2010 that by mutual consent Assulin’s contract would not be renewed, on the one hand ending his desire to become a full-fledged player at one of the world’s top clubs, but on the other giving him the opportunity to determine where he went next as a free agent.While it was easy to understand Assulin’s wish to join Manchester City later that year, he ended up paying a dear price for that decision.Assulin will celebrate his 25th birthday in three months and his talent remains predominantly unfulfilled.He chose to join City after going unsigned in the 2010 summer transfer window, but unsurprisingly he never even made a single senior appearance for the Manchester club.At perhaps the most crucial stage of his career, Assulin made the worst possible decision, and he is still dealing with the consequences.City was able to offer Assulin virtually everything, other than the one thing he really needed, namely playing time.Assulin’s potential was and remains undoubted, but in order to realize it, he needed to play as much as possible to hone his skills in real time in a way not possible to replicate in training.City’s name may look nice on his résumé, but just like he found himself settling for the B team in Barcelona, Assulin had to be content with playing for the reserves in Manchester instead of experiencing meaningful soccer at a vital time in his development as a player.Assulin ultimately joined Championship side Brighton & Hove Albion on a loan deal in February 2012, with manager Gus Poyet saying: “He showed great potential as an outstanding young talent under Pep Guardiola at Barcelona – I hope he can realize some of that potential here at Brighton.”He made just seven appearances for Brighton and in May of that year was also released from City.Assulin then returned to Spain, where his reputation from his days at Barcelona still lingered, but his career never took off.He made 25 appearances for Racing Santander in the second division in 2012/13, but moved on after one year, signing a three-year deal with Granada CF, only to be immediately loaned to Hercules of the second division.He played 32 games for the side, but couldn’t save it from relegation to the third division and moved on to Mallorca. He made just six appearances for the team last season, playing a mere total of 116 minutes.Assulin had an offer from Hapoel Tel Aviv last summer, but he chose to wait for a better deal and ended up having nowhere to play. He underwent a trial at Scottish powerhouse Glasgow Rangers, currently playing in the second division, during October, but was not offered a permanent deal.Fortunately for Assulin, Hapoel’s first half to the season has been so desperately poor that it was still interested in bringing aboard a player who has barely seen any action over the past year.Tel Aviv’s Reds sit just two points above the relegation zone, going winless over its past five matches.Hapoel has scored just a single goal over that stretch and 10 goals in total in 17 league matches this season.It is in dire need of an offensive spark which Assulin could potentially provide, but it remains to be seen if he is actually capable of doing so.“I’m happy to be joining Hapoel Tel Aviv. I wanted to come here in the summer, but it didn’t work out and now I’m here and intend on giving my all with my new teammates for the success of the team and this great club,” Assulin told the club’s website. “I know that the situation at the moment isn’t very good, but I’m sure that we will be able to embark on a new course and in the long run register achievements. I feel that I have found here a home and a family and that brings me great joy.”Assulin became the youngest player capped for the Israel national team two weeks before his 17th birthday in March 2008, but hasn’t played for the blue-and-white since.As a relatively unknown commodity, the Nahariya native will likely not be suiting up for the blue-and-white again any time soon, but at least at Hapoel he will have a platform on which to display his ability.There is little doubt Assulin possesses a rare talent, and after returning to Israel, we may actually all finally have a chance to experience it.