The Israeli sports establishment needs to keep investing in athletics and swimming as those provide the foundation for so many other sports. 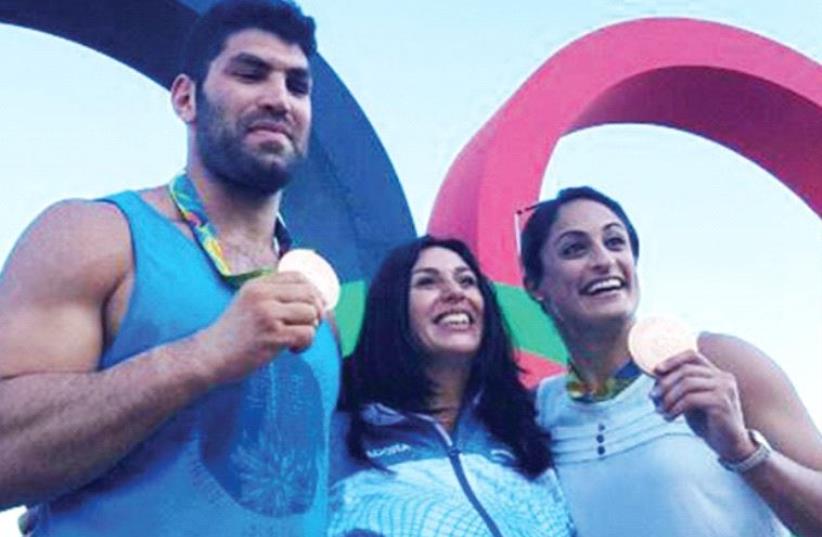 ISRAELI JUDKOAS Yarden Gerbi (right) and Ori Sasson (left), posing with Culture and Sport Minister Miri Regev, won the blue-and-white’s lone medals at the Rio Olympics which came to a close on Sunday night.
(photo credit: Courtesy)
Advertisement
There is no escaping the bottom line. Medals change everything. They change the life of the winner, the mood of a nation and the way an entire delegation is perceived.Consider the difference between Yarden Gerbi and Sagi Muki.Competing in the judo events at the Rio Olympics on subsequent days, they both found themselves in a bout for the bronze medal following a roller-coaster day filled with highs and lows.One would go on to become a national hero, a household name across Israel, while the other has been quickly forgotten, returning to his pre-Olympic anonymity, perhaps forever.The difference between the two? Gerbi won and Muki lost.It is as simple, and cruel, as that.One second of focus, or the lack of it, is all that separates glory and agony.Significant details, like the fact Muki struggled with injury in the weeks leading up to the Olympics, barely being able to tie his own shoelaces due to two slipped discs in his back, was quickly lost in the sea of information regarding Gerbi’s path to success. What she said to her parents as a three-year-old, the way she behaved in school and what she eats for lunch have all suddenly become relevant topics of conversation.With Israel winning just seven Olympic medals in its history prior to Gerbi’s triumph, and none since 2008, it was hardly surprising the prime minister and president scurried to be the first to congratulate Gerbi over the phone. Both could only wish for her approval rating.All of that honor could have belonged to Muki. But he lost in the fight for the bronze a day before Gerbi won.When assessing the entire delegation’s performance in Rio it is tempting to adopt the notion that all that counts is the medal count.But a deeper look into the results of the Israeli athletes in the 2016 Games presents a far more complicated picture. The fact the blue-and-white delegation won two medals in an Olympics for just the third time ever, and the first since Athens 2004, thanks to Gerbi and fellow judoka Ori Sasson, may very well be all we remember from the Rio Games 10 years from now.But the showings of the rest of the athletes provided an important insight into the state of Israeli sports and possible ways to improve its results.Take swimming for example. It is one of the highlights of every Olympics and a sport with wide ranging benefits for the entire population. Israel sent seven swimmers to Rio, but only Yakov Toumarkin progressed past the heats, and every single member, including Toumarkin, failed to set personal best times.Toumarkin’s qualification for the semis of the 200-meter backstroke was also considered a disappointment as he didn’t come close to reaching the final. He finished that event in seventh place in London 2012.Every member of the team, guided by coach Leonid Kaufman, simply didn’t peak at the right time, raising questions regarding their preparations for the Games.While in other sports your result also depends on your opponent, in swimming it is basically the athlete competing against the clock.After almost 22 consecutive years as the head coach of the Israel swimming team, Kaufman’s position could be in danger, with the Israel Swimming Association facing some tough decisions regarding possible changes.The state of Israeli athletics, another pillar of the Summer Games, is even worse.The Israel athletics team to Rio numbered eight members, but five of them were marathon runners after the IAAF eased the qualifying time, with none finishing higher than 74th place.Hanna Knyazyeva-Minenko ended the women’s triple jump final in fifth position, just six centimeters from a place on the podium, but like 400-meter runner Donald Sanford, she is only representing the blue-and-white due to her marriage to an Israeli.High jumper Dmitry Kroyter is a produce of Israeli athletics, but perhaps that is not such a great source of pride after he only managed 2.17m in the men’s qualifiers, finishing in 41st place out of 43.There were also disappointments for Israel in events like artistic gymnastics (Alex Shatilov), women’s wrestling (Ilana Kratysh) and taekwondo (Ron Atias), while the likes of Ron Darmon (triathlon) and Shlomi Haimy (mountain biking) did a lot better than expected, but were still unable to finish among the top 20.The diversity in the delegation, which had representatives in a record 17 events in Rio, is a certain positive, but sports like golf and badminton, as well as those aforementioned, suffer from an extreme lack of depth in Israel, and it is hard to be optimistic regarding their long term prospects.Israel’s Olympic medals have, and will, come in sports like judo and sailing in which the country has a history of success and a strong foundation to build on.Five of Israel’s nine Olympic medals have come in judo following Gerbi and Sasson’s triumphs. Israel’s windsurfers have scaled the podium three times, with Lee Korzits and Ma’ayan Davidovich being on the verge of adding to that tally in the past two Olympics, both painfully missing out on a medal in the final day of competition.The country’s only other Olympic medal came courtesy of kayaker Michael Kolganov in Sydney 2000, but history has shown that Israel’s best chance of claiming medals in Tokyo 2020 will be in events in which its pedigree is proven.The Israeli sports establishment needs to keep investing in athletics and swimming as those provide the foundation for so many other sports. But just don’t expect the country’s next medal to come in those events.Only time will tell who will win Israel’s 10th Olympic medal, but if history is any indication it is safe to say it will arrive courtesy of a judoka or a sailor.[email protected]