Sinai says: Zahavi’s clutch touch, hunger to triumph make him one of a kind 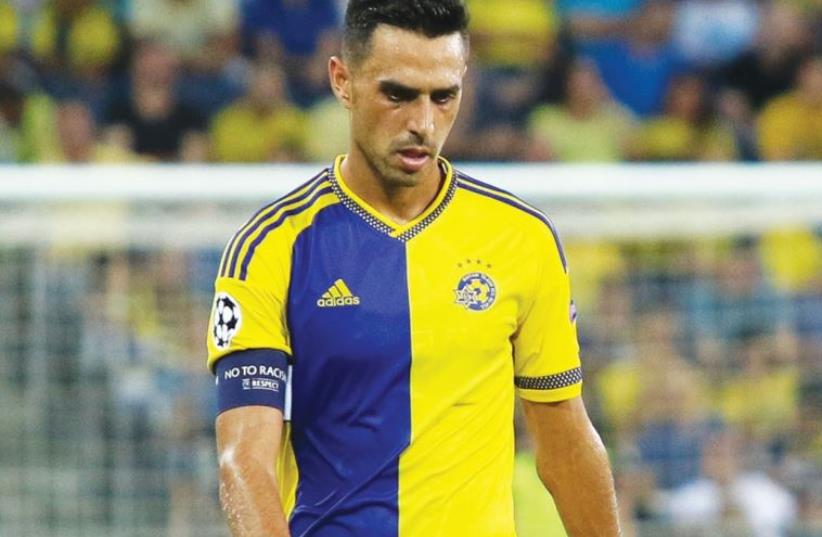 Maccabi Tel Aviv midfielder Eran Zahavi
(photo credit: ERAN LUF)
Advertisement
It has always been difficult to put a finger on what makes Eran Zahavi so great.With no obvious trait standing out, there has always been something somewhat intangible about the 28-year-old’s success.He is rarely the fastest player on the pitch and he is never the strongest.On the face of it, there doesn’t seem to be anything special about his shooting or heading, or for that matter, any other aspect of his game.So what makes Zahavi not only the greatest Israeli player of his generation, but arguably one of the best the country has ever seen? Perhaps it is the aura of inevitability that somehow Zahavi will lead his team to glory whatever the circumstances, an aura that has surrounded him since joining Maccabi Tel Aviv three years ago and helping transform the yellow-and-blue into the dominant force in Israeli soccer.Take Monday night, for example.With the score against Beitar Jerusalem tied at 2-2 at Bloomfield Stadium and the clock closing on the 90th minute, one couldn’t be blamed for believing that Maccabi was about to squander its chance to take the outright lead in the standings for the first time in almost four months.However, most of those who have followed Zahavi’s rise to stardom over recent years were thinking something else completely. Not only was it obvious to them that Maccabi would somehow manage to take all three points, but it was clear that Zahavi would be responsible for the triumph.Those are the moments Zahavi lives for and he so rarely disappoints.And with the prolific midfielder on the verge of registering an historic record, the scene was set perfectly for a glorious finish.After equaling Nissim Elmalich’s record of 30 goals from the 1954/55 campaign with his strike in the 41st minute, Zahavi scored the most ordinary goal imaginable in the 90th minute to give Maccabi a 3-2 win, tucking the ball in from close range.It was such a simple goal that seemingly any player could have scored it. However, it was of course Zahavi who got the final touch, sending Bloomfield into delirium for the countless time.“Towards the end of the match we almost gave up and started to believe that maybe we won’t score the winning goal,” said Maccabi midfielder Dor Micha. “But thank God we have Eran. We are always waiting for a moment of brilliance from Eran.”Zahavi for his part made sure to credit his teammates for their role in the record, while admitting that Monday’s goals ended a three-year chase for him.“I know what the papers say and write about me and about this record, but I want to thank my family and my teammates that helped me reach this achievement. I chased and chased and chased and broke the record,” said Zahavi, who scored 29 goals two seasons ago and 27 last term.“I would be lying if I said I wasn’t under pressure. I kept missing and missing. My shots kept hitting Beitar players, time was winding down and I wasn’t thinking of the record anymore. I was only thinking about getting the win and returning to first place.”Maccabi, which had gone 10 years without a championship before Zahavi’s arrival in January 2013, is aiming to become just the second team in local soccer history to win four straight championships, the first since Hapoel Petah Tikva took five consecutive league titles between 1959 and 1963.Since losing 2-1 to Hapoel Beersheba at Bloomfield back in December of last year, Maccabi had been playing catch-up with its title rival.Maccabi had led the standings for a day or two over the past four months due to the schedule, but it only finally took the outright lead on Monday, winning for the seventh time in the past eight matches and making the most of Beersheba’s 1-1 draw against Maccabi Haifa on Saturday.Zahavi, who joined Maccabi from Italian club Palermo after leaving Hapoel Tel Aviv for Serie A, has carried the team since the start of the season, and not only in league play.He almost singlehandedly led the yellow-and-blue to its first Champions League group stage appearance since 2004/05. He scored seven goals in five qualifiers, including a 96th-minute equalizer in the first leg of the playoffs against Basel, as well as two late goals in the 2-0 win over Viktoria Plzen in the Czech Republic in the second leg of the third qualifying round, overturning a 2-1 defeat from the first leg.Zahavi also of course scored the goal that gave Maccabi a 1-1 draw in the second leg with Basel to secure its progress, as well as the team’s only goal in the group stage, a penalty in a defeat to FC Porto.Maccabi is clearly about more than just Zahavi, after all, this is a team sport. But it is just as obvious that he is the difference between qualifying for the Champions League and just missing out and winning the Premier League title rather than finishing a close second.“In Holland, Zahavi would be on the national team and he may be on a big team in Europe,” said Maccabi’s Dutch coach Peter Bosz. “He not only scored a brace, but he created a number of chances as well and that’s something only the greats can do.”Monday night ranks at the very top of Zahavi’s personal achievements, but being the winner that he is, he will not be content unless Maccabi also claims the championship.Perhaps it is that insatiable appetite for success that separates Zahavi from all his counterparts and has already secured him sporting immortality.“This is my greatest moment at Maccabi Tel Aviv, but it is important that it comes with a title. If we don’t win the championship this will not be worth much to me,” explained Zahavi, before already turning his sights to next season. “I hope I can already break the record next year. I want to do it again.”