Beersheba kept its fifth straight clean sheet on the way to its seventh victory from the past eight games. 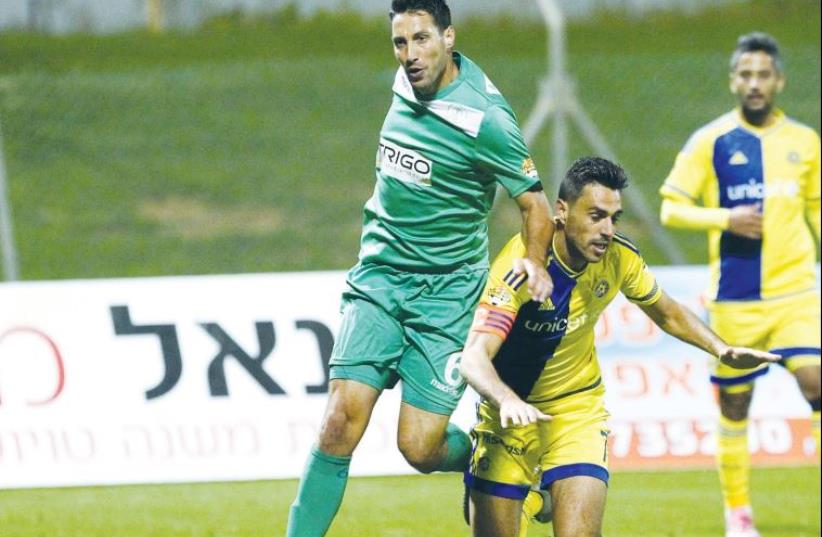 Maccabi Tel Aviv and captain Eran Zahavi (right) stumbled against Hapoel Kfar Saba and Amir Nusbaum
(photo credit: DANNY MARON)
Advertisement
Hapoel Beersheba moved tied on points with Maccabi Tel Aviv at the top of the Premier League standings on Saturday night, beating Bnei Sakhnin 1-0 to make the most of the yellow-and-blue’s goalless deadlock at Hapoel Kfar Saba.Maharan Radi scored the only goal of the match for Beersheba at Doha Stadium, heading the ball into the top left corner in the 44th minute, with Maor Melikson providing the decisive pass after a nifty team move.Beersheba kept its fifth straight clean sheet on the way to its seventh victory from the past eight games.“We should have made this game easier,” said Beersheba coach Barak Bachar, who signed a one-year contract extension last week. “We totally controlled the match and reached many chances but failed to convert them. This was the type of match which you end in a 1-1 draw and wonder all week how you didn’t win. Fortunately for us, we did.”Maccabi Tel Aviv saw its four-match winning streak come to an end at Levita Stadium in Kfar Saba. The three-time defending champion had its chances, but Kfar Saba goalkeeper Ohad Cohen ensured the match finished in a 0-0 draw with some excellent saves, meaning Maccabi only leads Beersheba by virtue of its slightly superior goal difference (+16 to +15).“My team played a good game and had many chances but couldn’t score,” said Maccabi coach Slavisa Jokanovic. “We played well enough but didn’t score the goal. We played how I had wanted the team to play and we had great pace. We deserved the three points but this is football.”Hapoel Tel Aviv remains in serious trouble after dropping to a 1-0 loss to Maccabi Petah Tikva. Joachim Mununga scored the only goal of the match from the penalty spot in the 55th minute, capitalizing on a questionable refereeing decision.“I expected the referees to show us a little more respect,” said Hapoel coach Guy Levy. “I’m disappointed with the result because this match should have ended in a draw. We are showing some improvement, but we need to continue working. We need to decide whether we want to collapse under the pressure or believe in ourselves.”Petah Tikva moved up to third place, while Hapoel is still only three points off the relegation zone. Three points are all that separate Ironi Kiryat Shmona in sixth place and Hapoel Haifa in 13th, with five teams, including Kiryat Shmona and Hapoel Tel Aviv on 15 points.Hapoel Ra’anana solidified its place in the top five with a 3-1 victory at Bnei Yehuda on Saturday. Yuval Shabtay (10) and Evans Kangwa (34, 46) scored for the visitors, with Jude Nworuh (49) netting a consolation goal for Bnei Yehuda after Pedro Galvan missed a penalty in the 23rd minute.Also Saturday, Maccabi Netanya and Hapoel Acre drew 0-0.Beitar Jerusalem hosts Ironi Kiryat Shmona on Sunday, with Maccabi Haifa and Hapoel Haifa to meet in the derby on Monday.