Beersheba will secure the title with three matches to play with a win over the yellow- and-blue in Netanya. 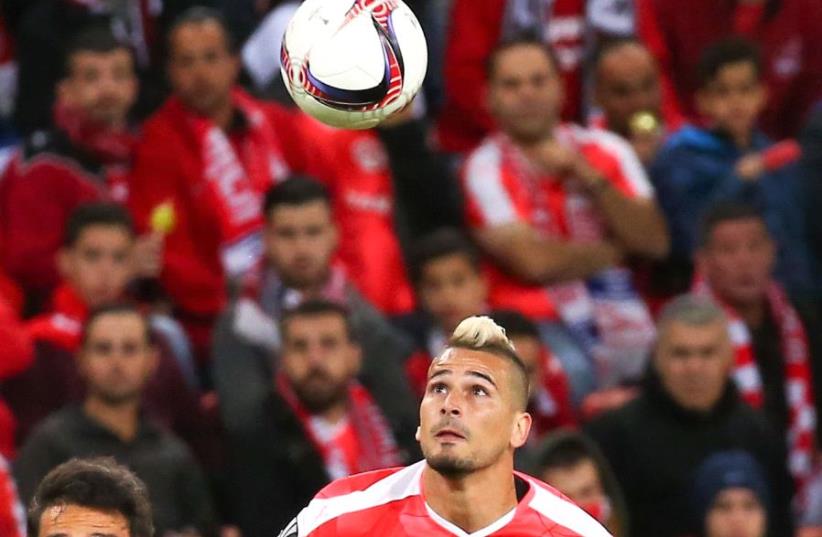 Hapoel Beersheba’s Maor Buzaglo
(photo credit: DANNY MARON)
Advertisement
With an eight-point gap and only four matches left to play, Hapoel Beersheba is confident of claiming a second straight Premier League title regardless of the outcome of Saturday’s game at Maccabi Tel Aviv.But the defending champion would like nothing more than to clinch another title in a match against its only challenger to cement its status as the leading force in Israeli soccer.Beersheba will secure the title with three matches to play with a win over the yellow- and-blue in Netanya, with any other result to delay the reigning champion’s celebrations for at least one more week.Beersheba only needs five points from its four remaining games to take the title, even should Maccabi win all its matches, including on Saturday.In fact, four more points should be enough for Beersheba, as its goal difference is far superior to that of Maccabi’s (plus 52 compared to plus 39).But Beersheba isn’t concerned about any calculations just yet, focusing on wrapping up first place on Saturday by setting a club record of 10 consecutive wins.Maccabi Tel Aviv won for the 13th time in its past 16 matches last Saturday, beating Bnei Sakhnin 3-1. The yellowand- blue has picked up 25 of a possible 30 points since the hiring of coach Lito Vidigal and has won 10 straight home games, a streak stretching back to the start of last December.Elsewhere Saturday, Beitar Jerusalem looks to maintain its hold on third place when it hosts Maccabi Haifa. Beitar (50 points) climbed up to third, which leads to Europa League qualification, with a 2-1 win on Wednesday over Maccabi Petah Tikva (48), which hosts Bnei Sakhnin (45) on Saturday.On Thursday, Bnei Yehuda remained only four points above the relegation zone after losing 2-0 at Ironi Kiryat Shmona.Ahmed Abed (58) and Shoval Gozlan (84) scored for Kiryat Shmona. Hapoel Haifa beat Hapoel Ra’anana 2-0.