Soccer: Beitar Jerusalem up to 3rd place after beating Ra’anana

Despite Monday’s loss, Ra’anana sits in fifth place, with Silvas receiving much of the credit for his work with one of the shallowest squads in the league. 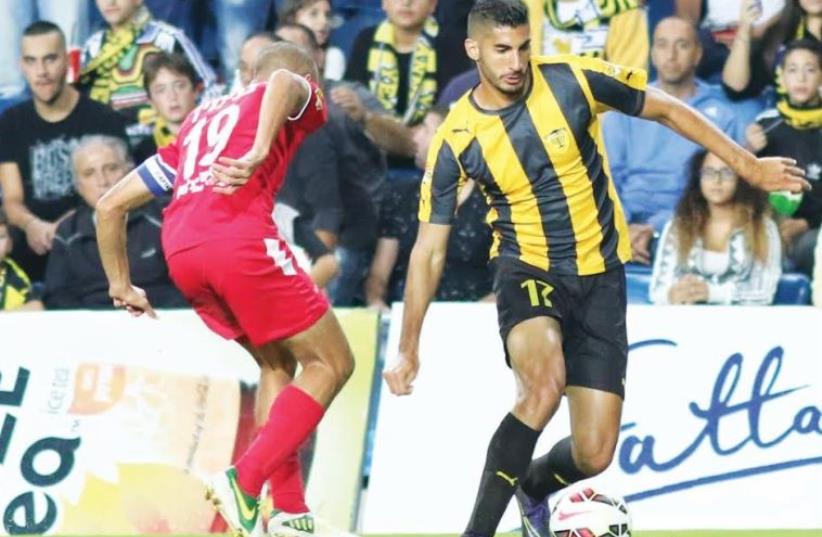 Beitar Jerusalem midfielder Lidor Cohen (right) in action during a match against Hapoel Ra’anana at Moshava Stadium in Petah Tikva
(photo credit: DANNY MARON)
Advertisement
Beitar Jerusalem climbed up to third place in the Premier League standings on Monday night, beating Hapoel Ra’anana 1-0 at the Moshava Stadium in Petah Tikva for its fourth victory in the past five matches.After failing to win any of its first four games of the campaign, Beitar has hit its stride over the past month and is just four points back of league-leaders Hapoel Beersheba and Maccabi Tel Aviv after Lidor Cohen scored the only goal of Monday’s match in the 11th minute.Beitar wasn’t especially impressive at the Moshava where it was hosting the contest due to the resurfacing of the pitch at Teddy Stadium, but it did enough to claim all three points, with goalkeeper Boris Klayman coming up with a crucial save in the 90th minute.“We are aiming for the top,” said Beitar coach Slobodan Drapic. “Beitar is a new team and the players don’t know each other yet. But we will improve with time.”Haim Silvas may have been coaching Ra’anana for the last time after Hapoel Tel Aviv inquired regarding his services earlier Monday. Ra’anana finished in 10th place under Silvas last season, after he was fired and rehired over four tumultuous days in January.Despite Monday’s loss, Ra’anana sits in fifth place, with Silvas receiving much of the credit for his work with one of the shallowest squads in the league.Tel Aviv initially targeted former Israel national team coach Eli Gutman, but his financial demands and hopes of working abroad ended his candidacy.For a few hours on Monday, veteran Dror Kashtan was the new favorite to replace Cesar Mendiondo, who was sacked two months ago, before Hapoel decided to hone in on Silvas.Assistant coach Walid Badir has guided Hapoel for the past two months.Meanwhile, Shlomi Dora was sacked by rock-bottom Maccabi Netanya on Monday, a day after the team dropped to a 2-0 defeat to Hapoel Beersheba.Netanya has won just one of nine matches so far this season, scoring a mere five goals.Netanya is aiming to bring in Elisha Levy, who has been out of work since his contract at Hapoel Beersheba wasn’t renewed at the end of last season.Elsewhere, Israel international Nir Bitton signed a new contract with Scottish giant Celtic which runs until the summer of 2020. The 24-year-old midfielder joined Celtic from Ashdod SC in 2013, and has since become a key player for the team.“I have a great relationship with the manager and the backroom staff at Celtic,” Bitton told the club website. “I am so pleased to commit my long-term future to Celtic and I now look forward to doing everything I can to bring the club and our fans more success.”Bitton has won two Scottish Premiership titles and a League Cup and said he had little doubts about extending his stay at the club.“As soon as I got a new offer from Celtic I had no questions about signing,” said Bitton, who has also established his place in the Israel national team’s starting lineup over the past year. “When you play for a club like Celtic you don’t think twice. It’s a huge club, the best fans in the world and Celtic Park is one of the best stages in Europe so I’m just delighted to extend my stay here.”