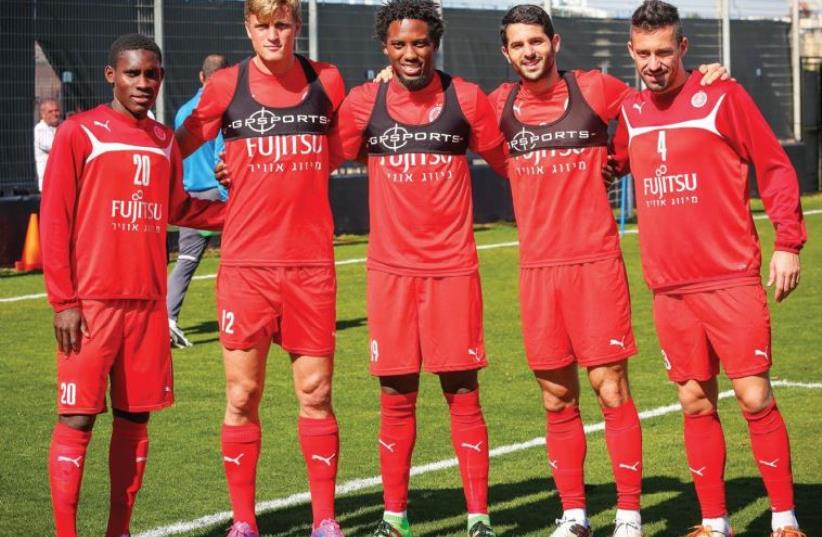 From left: Hamza Barry, Aaron Schoenfeld, Caue Cecilio, Gal Shish and Nemanja Nikolic of Hapoel Tel Aviv
(photo credit: SHMULIK VASINI / HAPOEL TEL AVIV)
Advertisement
After getting off to one of the worst starts in Premier League history, it seems that almost everyone connected to Maccabi Netanya is resigned to the fact that the team is destined to be relegated to the National League at the end of the season.Everyone but new coach Menahem Koretzki that is.Netanya has occupied last place in the standings for much of the season and currently sits 11 points from safety after winning just one of 21 matches to date.Koretzki became Netanya’s third coach of the season two weeks ago, replacing Reuven Atar, who failed to register a victory in his eight matches in charge after filling the vacancy left by the sacking of Shlomi Dora.Netanya has lost its past five matches without scoring a goal, the last two under Koretzki, and has only found the back of the net once over its last 10 games. With 10 points from a possible 63, Netanya has a 15.87 percent success rate, which if it fails to improve on by the end of the campaign will be the fifth worst all-time.Netanya’s moves in the transfer window also seem to indicate that the club’s management has lost all hope, with 12 players leaving the team, including arguably its three most talented players in Romario Pires, Aaron Schoenfeld and Hamza Barry.Netanya brought in eight new players in their place.The departure of owner Eli Segev late in 2014 left the club in a dire economic situation, and with no one stepping up to bankroll the team in his place, current Netanya chairman Doron Osidon has been forced to slice spending by selling players, with the Netanya Municipality also helping keep the club afloat.“It seems that Netanya will be relegated,” said Mayor Miriam Feirberg Ikar on Wednesday. “We had a lot of hopes from many people and suffered disappointments. “Netanya will go down, but will come right back up.”While the mayor has clearly accepted Netanya’s fate, Koretzki refuses to throw in the towel. “There are still enough matches for us to stay up and stranger things have happened,” he said. “Hopefully this massive change to the squad will help.”Netanya will have to record the upset of the season to register its second win of the campaign on Saturday when it visits league-leader Hapoel Beersheba.Beersheba holds a three-point gap at the top after going unbeaten in its past 16 matches, stretching back to late September, winning 14 times and drawing twice.“I’m here to win a championship,” said new Beersheba striker Muhammad Ghadir on Thursday, a day after signing for the club.Beersheba can move six points clear for at least a day, with Maccabi Tel Aviv hosting Hapoel Tel Aviv in the derby on Sunday.Hapoel Tel Aviv is set to hand several players their debuts, with Nemanja Nikolic, Hamza Barry and Gal Shish all signing on the last day of the window. Hapoel added nine players in all in the transfer window, taking its tally for the season to a ridiculous amount of 33 players.Also Saturday, Gili Vermouth could make his debut for Maccabi Haifa when the Greens host Maccabi Petah Tikva, Bnei Yehuda visits Hapoel Kfar Saba, Bnei Sakhnin welcomes Hapoel Haifa and Ironi Kiryat Shmona goes to Hapoel Acre.Beitar Jerusalem visits Hapoel Ra’anana on Monday night.