Soccer: Greens bounce back in win over Hapoel Tel Aviv

Haifa failed to find the back of the net in seven of its first 10 matches of the campaign and its performance on Monday was anything but impressive. 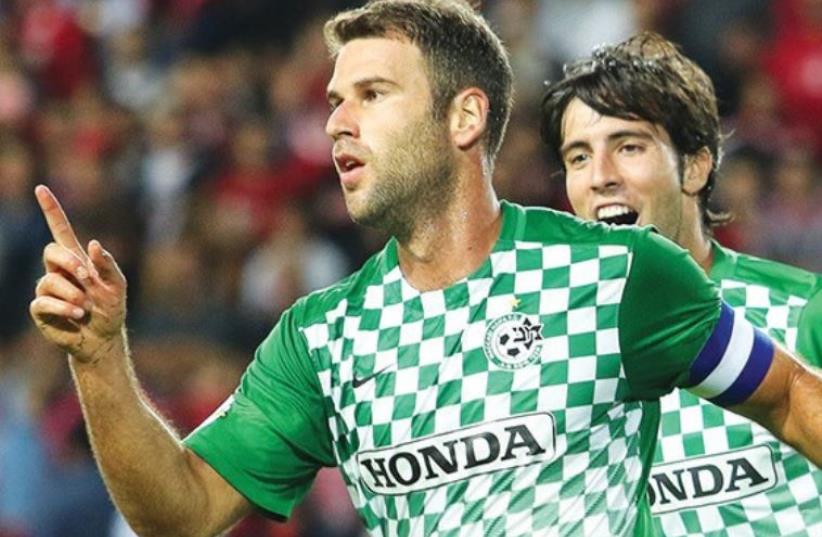 Maccabi Haifa defender Dekel Keinan celebrates after netting the first of his two goals in a 3-0 win over Hapoel Tel Aviv
(photo credit: ERAN LUF)
Advertisement
Maccabi Haifa climbed out of the relegation zone after registering only its third victory of the Premier League season on Monday night, beating Hapoel Tel Aviv 3-0 in Netanya.Haifa failed to find the back of the net in seven of its first 10 matches of the campaign and its performance on Monday was anything but impressive.However, it could have hardly asked for a better opponent against which to break out of its slump, with Hapoel dismal in defense and atrocious in attack in Guy Levy’s first match at the helm.It should hardly be surprising that a clash between two of the season’s most disappointing sides resulted in such a poor game, but Haifa won’t care one bit after returning home with the points.Goals by captain Dekel Keinan (28, 56), his first brace since a 3-0 win over Hapoel in January 2013, and another from Glynor Plet (49) secured the three points for the Greens, who moved ahead of Hapoel on goal difference, with both teams only a single point above the relegation zone.However, they are also only five points back of Hapoel Ra’anana in fourth place, giving both coaches real hope of salvaging something from a lost season.“This is an important win for us,” said Haifa coach Roni Levy. “I think that this will give us more confidence and the most important thing is that we build on this.”Guy Levy, who was hired as Hapoel’s coach two months after the sacking of Spaniard Cesar Mendiondo, remained optimistic he can turn things around at the club.“This isn’t the debut I hoped for,” said Levy. “We conceded basic goals which we can prevent easily in the future. We need to be more organized and less exposed at the back. We need to find the right combination between defense and offense to get back on track.”The match could have hardly gotten off to a worse start for Haifa, with Ofir Kriaf being taken off with a knee injury after three minutes. Neither side seemed too interested or capable of scoring a goal, and it was no surprise that the opener arrived from a set piece, with Polish midfielder Ludovic Obraniak’s accurate cross being steered in by Keinan’s head.Plet made it 2-0 four minutes into the second half, driving in Orel Dgani’s cross from the right. The Dutch striker provided the assist for Keinan’s second goal seven minutes later, with Hapoel’s hapless defense not being able to clear the ball after it bounced around in the box.