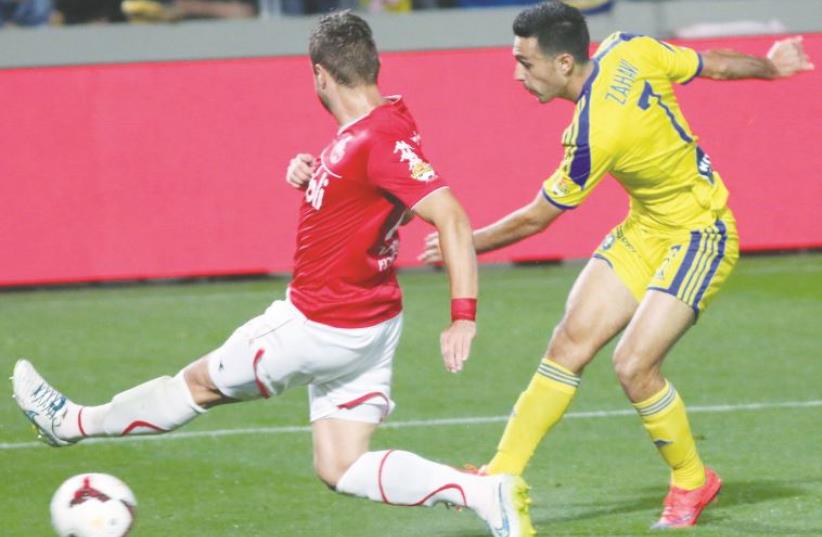 Maccabi Tel Aviv midfielder Eran Zahavi (right) kicking the ball during a match against Hapoel Tel Aviv
(photo credit: ADI AVISHAI)
Advertisement
After completing the most expensive signing in Israeli soccer history on the back of the draw for the Champions League group stage, Maccabi Tel Aviv will need to return its focus to the pitch on Sunday.The three-time defending Premier League champion visits its main title challenger Hapoel Beersheba at Teddy Stadium in Jerusalem, with Beersheba’s new Turner Stadium still not ready.Maccabi has been in dreamland since drawing 1-1 with FC Basel last Tuesday to secure its progress to the group stage, where it was drawn on Thursday to face Chelsea, Porto and Dynamo Kiev.On Saturday, the yellow-and-blue announced the signing of 19-year-old Serbian Predrag Rajkovic, who is regarded as one of the best young goalkeepers in the world. Rajkovic, who joins from Red Star Belgrade on a five-year deal, helped Serbia to the FIFA Under-20 World Cup title earlier this summer, being chosen as the tournament’s best goalkeeper. The deal is believed to be worth in the region of 3 million euros.Spaniard Juan Pablo, who was Maccabi’s No. 1 goalkeeper since 2013, was released by the club, with Hapoel Ra’anana ‘keeper Daniel Lifshitz to join Tel Aviv on a season-long loan as a backup for Rajkovic.“This has been one of the most painful and difficult decisions that we had to take in recent times at Maccabi Tel Aviv,” said sports director Jordi Cruyff. “Juan Pablo has been a very loyal and dedicated player and was pivotal to the clubs’ success during his two seasons at the club and our recent European campaign.”Maccabi CEO Martin Bain said: “This reflects our ambition in both our short term goals and continued development of the clubs’ strategy.There were a number of top European clubs expressing interest in Rajkovic and we are delighted to have secured his signature on a five-year-deal.”Rajkovic could already start for Maccabi on Sunday, although coach Slavisa Jokanovic is more likely to opt for 17-year-old Haviv Ohayon, who played in last week’s 3-2 win over Bnei Sakhnin.Beersheba threw down the gauntlet by opening its league campaign with an impressive 3-1 win at Ironi Kiryat Shmona last Sunday.Beersheba was Maccabi’s main rival for the title in each of the past two seasons, but it failed to push the yellow-and-blue all the way, prompting the team to bring in coach Barak Bachar in place of Elisha Levy while strengthening last season’s core with the signings of Maharan Radi, Ben Sahar, Anthony Nwakaeme, Matan Ohayon and Shir Tzedek.Maccabi Haifa’s start to the season went from bad to worse on Saturday, with the Greens suffering a 1-0 defeat to Hapoel Kfar Saba.Mavis Tchibota, who is on loan at Kfar Saba from Maccabi Tel Aviv, scored the only goal of the match in the 72nd minute. Itay Shechter missed a penalty for Haifa seven minutes later and the Greens dropped to their second straight defeat against a newly-promoted side after losing 3-0 to Bnei Yehuda last weekend.Like Haifa, Hapoel Tel Aviv has also yet to score this season, losing 3-0 to Ironi Kiryat Shmona at Bloomfield Stadium on Saturday. Ofir Mizrahi (51, 59) and Ahmed Abed (62) scored for Kiryat Shmona.Also Saturday, Maccabi Petah Tikva beat Hapoel Haifa 3-0, while Hapoel Ra’anana defeated Bnei Sakhnin 3-2 thanks to Or Iluz’s stoppage-time winner.