Hapoel moved up to 10th place with the win, still only three points above the relegation zone, but also just four points back of fourth place. 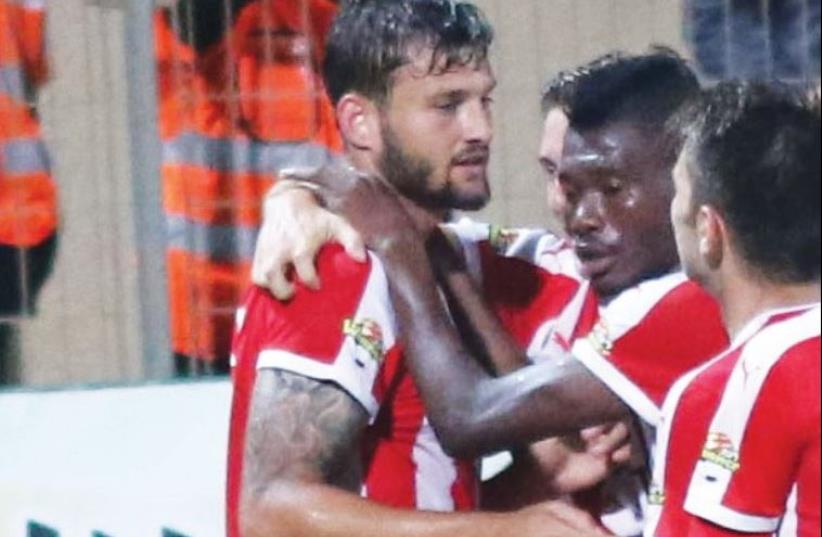 Hapoel Tel Aviv players congratulate Adi Gotlieb after he scored an 87th-minute winner last night to secure a 1-0 victory at Hapoel Acre
(photo credit: DANNY MARON)
Advertisement
Adi Gotlieb came to Hapoel Tel Aviv’s rescue yet again on Monday night, scoring a late winner to secure a 1-0 victory at Hapoel Acre that took the team above the relegation zone.The 23-year-old defender found the back of the net with his header in the 87th minute after a poor display by both teams, making the most of a mistake by Acre goalkeeper Danny Amos. Gotlieb also scored in the fourth minute of stoppage time three weeks ago to give Tel Aviv a 1-0 win over Hapoel Ra’anana.Hapoel moved up to 10th place with the win, still only three points above the relegation zone, but also just four points back of fourth place.“I played here for four years and I felt bad celebrating here,” said Gotlieb, who moved to Tel Aviv from Acre last summer. “This was a very important win for us and hopefully we can build on this.”After dropping to a 3-0 defeat to Maccabi Haifa in his debut at the club last week, Hapoel coach Guy Levy was pleased at notching his first win.“We didn’t create chances but the players showed some improvement from my first match in charge,” said Levy. “The players deserve this win for dealing with the pressure. The players showed maturity and I’m very pleased with the win as these are extremely precious points.”Acre is two points back of Hapoel, just a single point above the relegation zone.The first Toto Cup quarterfinal will get underway on Tuesday when Maccabi Haifa hosts Maccabi Petah Tikva in their first leg in Netanya.Haifa coach Roni Levy plans on giving fringe players of the likes of Yuval Yosipovich and Neta Lavi an opportunity in the starting lineup, with Petah Tikva coach Ran Ben-Shimon to also make the most of the chance to hand some of his squad’s youngsters vital experience.The first legs of the other three quarterfinals will take place on Wednesday. Hapoel Haifa hosts Ironi Kiryat Shmona, Hapoel Beersheba visits Beitar Jerusalem and Bnei Yehuda welcomes Maccabi Netanya.