Maccabi reached several superb opportunities to take all three points in the final minutes, but Nosa Igiebor and Dejan Radonjic registered misses that will likely be among the worst all season. 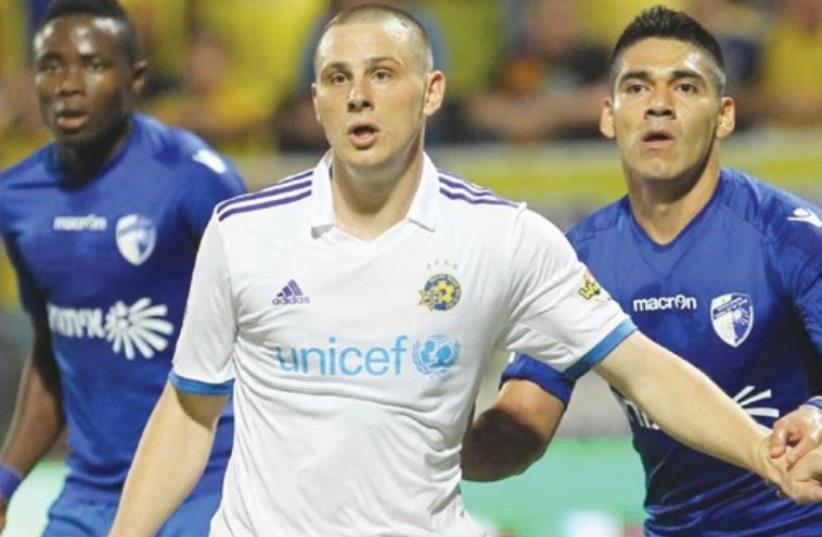 Maccabi Tel Aviv striker Dejan Radonjic (center) couldn’t convert his scoring opportunities and the yellow-and-blue was forced to settle for a 1-1 draw last night at Ironi Kiryat Shmona
(photo credit: DANNY MARON)
Advertisement
Three-time defending champion Maccabi Tel Aviv dropped its first points of the campaign after drawing 1-1 at Ironi Kiryat Shmona on Saturday night, leaving Maccabi Petah Tikva as the only perfect team three matches into the Premier League season.A mistake by Tel Aviv goalkeeper Predrag Rajkovic gifted Kassio the opener in the 20th minute, but the yellow-and-blue dominated the second half, leveling the score through Gal Alberman in the 72nd minute.Maccabi reached several superb opportunities to take all three points in the final minutes, but Nosa Igiebor and Dejan Radonjic registered misses that will likely be among the worst all season.Maccabi will fly to London on Tuesday ahead of Wednesday’s Champions League group stage opener against Chelsea and coach Slavisa Jokanovic believes Saturday’s result will have little impact on its next contest.“We played a very bad game in the first 45 minutes, but in the second half my team played good football and we were a bit unlucky at the end of the match,” said Jokanovic. “It’s two different games. In front of us is a great day and we must be ready to fight against one of the biggest football teams in Europe.”Petah Tikva made it three wins from three matches by beating Bnei Yehuda 3-1. Sari Falah gave Bnei Yehuda the lead after 29 minutes, but Joachim Mununga equalized from the penalty spot five minutes from the break and Idan Shemesh completed the comeback on the stroke of halftime.Bnei Yehuda lost Dolev Haziza to a red card three minutes into the second half, but Petah Tikva also found itself down to 10 men less than a minute later, with Dor Elo being shown a second yellow card for diving in the box.However, Mohammed Kalibat secured the win in the 62nd minute to extend Petah Tikva’s winning streak.Hapoel Beersheba returned to winning ways on Saturday with a 3-2 victory at Hapoel Ra’anana.A Maharan Radi penalty in the 23rd minute gave Beersheba the lead, with Rene Mihelic equalizing 13 minutes later. Ovidiu Hoban (73) and Ben Sahar (80) ensured Beersheba returned home with the three points, with Karem Arshid (81) netting a consolation goal.Maccabi Haifa remained in last place in the standings on Saturday despite picking up its first point of the season. Haifa registered a disappointing 0-0 draw against Bnei Sakhnin and is the only team yet to have scored this season.Also Saturday, Beitar Jerusalem drew 1-1 with Hapoel Haifa, Hapoel Tel Aviv and Maccabi Netanya also finished in a 1-1 tie and Hapoel Acre beat Hapoel Kfar Saba 1-0.