Despite a dismal start to the season, Maccabi’s third straight win moves it up to sixth place in the standings, only four points back of fourth. 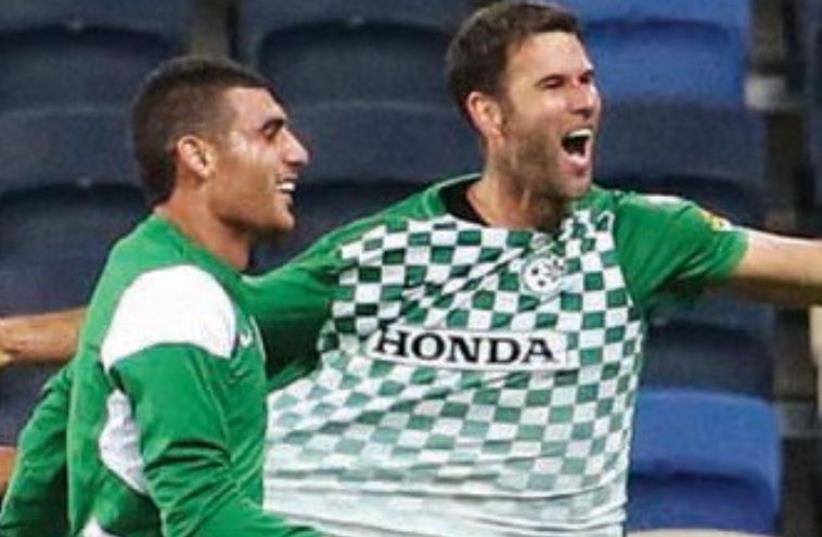 Maccabi Haifa defender Dekel Keinan (right) celebrates after giving his team a 3-2 lead in last night’s 4-2 victory over Hapoel Haifa at Haifa Stadium
(photo credit: ERAN LUF)
Advertisement
Maccabi Haifa came back from two goals down to beat Hapoel Haifa 4-2 in an action-packed derby at Haifa Stadium on Monday night.A Tomer Swisa brace gave Hapoel a 2-0 lead in the 17th minute, but the hosts lost captain Oshri Roash to a red card in the 11th minute and Maccabi would equalize by the break thanks to goals from Eliran Atar (41) and Ismaeel Ryan (44). Hapoel looked like it would be able to hold on for a point until Dekel Keinan headed the Greens in front in the 88th minute before Glynor Plet put the icing on the cake for Maccabi in stoppage time.Despite a dismal start to the season, Maccabi’s third straight win moves it up to sixth place in the standings, only four points back of fourth.Hapoel remained in the relegation zone with the defeat, which increased the pressure on under-fire coach Tal Banin.There was action almost from the first moment of the derby, with host Hapoel taking an early lead after just five minutes. Swisa’s free kick from 20 meters out hit the post, but fortunately for the Hapoel striker it bounced into the back of the net off the back of Maccabi goalkeeper Vladimir Stojkovic.Another major talking point arrived six minutes later, with Hapoel captain Roash being sent off after striking Haifa’s Plet in the face.Despite having with one less player, it was Hapoel which scored the next goal. Plet was penalized for bringing down Tadas Kijanskas in the box and Swisa stepped up to convert the spot kick.Being two goals down and one man up, Maccabi seized control of proceedings and erased the deficit in the final five minutes of the first half.Atar’s volley headed straight at Premysl Kovar, but Hapoel’s Czech goalkeeper parried the ball into his own net in the 41st minute before Ryan leveled the score from a tight angle with one minute remaining in the first half.Keinan would win the game for the Greens with two minutes remaining with an unstoppable header from a corner and the Maccabi supporters were in delirium when Plet scored a fourth to cap a memorable night.