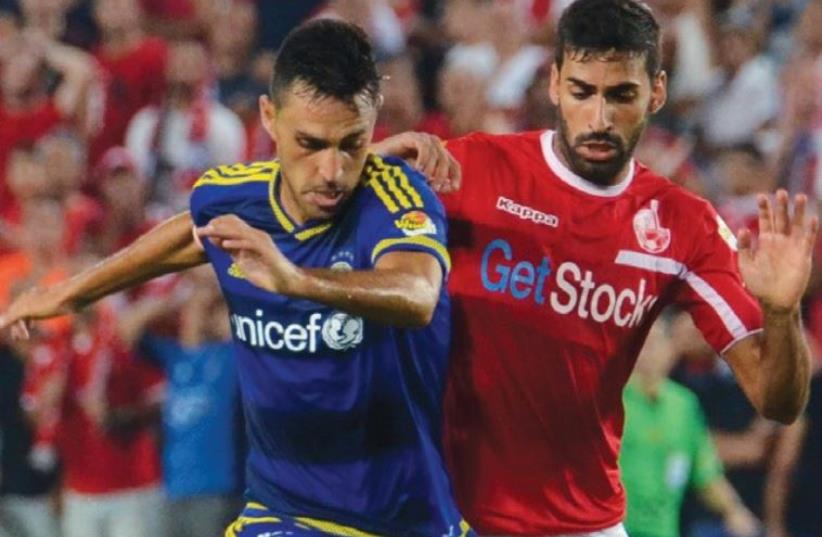 Maccabi Tel Aviv midfielder Eran Zahavi and Hapoel Beersheba defender Ofir Davidzada
(photo credit: MENI BEN-ARI)
Advertisement
The next Premier League champion will not be decided at Bloomfield Stadium on Monday night. However, the showdown between league leaders Maccabi Tel Aviv and Hapoel Beersheba presents both teams with an ideal opportunity to make a statement which could have major ramifications on the title race.Maccabi and Beersheba enter the encounter tied on 32 points, with the yellow-and-blue sitting at the summit thanks to a slightly superior goal difference (+18 compared to +16).The two teams have proven time and again this season that they are head and shoulders above the rest of the league and both enter Monday with plenty of momentum.The three-time reigning champion is unbeaten in its last six matches, winning eight of its past 10, while Beersheba is unbeaten in its last nine games, triumphing in eight of them.“It’s an important game for our supporters and one of the biggest games in Israel, but it’s not the last game of the season,” said Maccabi coach Slavisa Jokanovic, who according to reports in England is on the verge of a move to English Championship side Fulham.“We will try to win but there is a long season to go.”Jokanovic challenged Beersheba to prove that it is playing the best soccer in Israel, as many commentators have claimed over recent weeks.“People are saying that they are playing the best football in Israel and this is a chance for them to show this quality against us at Bloomfield,” he said.“They are a quality team, but I believe in my team. I believe in my players and I’m sure we will do a good job and our goal is to win the game.”Beersheba has beaten Maccabi on the road only once in the past 12 years, back in April 2011. The southerners have failed to defeat the yellow-and-blue in their past five meetings, with Maccabi claiming a 1-0 win when they clashed for the first time this season.“These are the two best teams in Israel,” said Beersheba coach Barak Bachar.On Sunday, Maccabi Haifa and Hapoel Kfar Saba drew 1-1 at Haifa Stadium.Greek midfielder Yiannis Papadopoulos gave the visitors the lead in the 20th minute before Ludovic Obraniak leveled the score in the 58th minute.