Speculation connecting Jokanovic with a move to England began several weeks earlier and he did his best to evade questions on the subject. 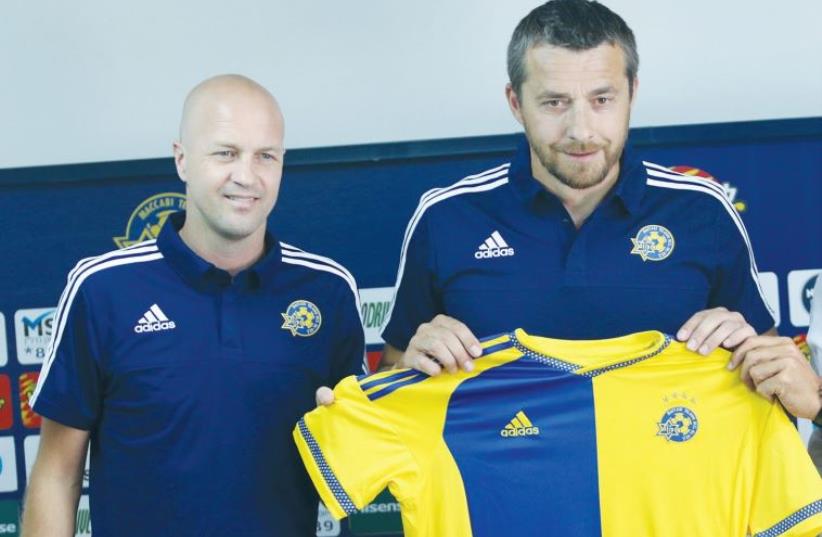 Slavisa Jokanovic (right) is introduced as Maccabi Tel Aviv’s new head coach with sports director Jordi Cruyff sitting beside him
(photo credit: ADI AVISHAI)
Advertisement
The search for a new coach at Maccabi Tel Aviv began in earnest on Monday following the departure of Slavisa Jokanovic a day earlier.The Serbian announced he is leaving the yellow-and-blue for English Championship club Fulham in a press conference that followed the team’s 5-0 victory over Ironi Kiryat Shmona at Bloomfield Stadium.Speculation connecting Jokanovic with a move to England began several weeks earlier and he did his best to evade questions on the subject, including in the TV interview that followed Sunday’s match, minutes before the news became official.Maccabi sports director Jordi Cruyff, who sat beside Jokanovic on Sunday, refused to comment on any specific names and the team will be guided in the meantime by Jokanovic’s Spanish assistant Javi Periera, who will be with the club for the next 10 days before reuniting with Jokanovic at Fulham.Spaniard Joan Carrillo is an early favorite to take over from Jokanovic after also being linked with the club this past summer.Carrillo led Videoton to the Hungarian championship last season, but left shortly after. He was named the coach of UD Almeria of the Spanish second division in October, but was sacked last Sunday after just two months following a poor run of results.While Maccabi never usually announces transfer sums, it made an exception to the rule on Sunday, revealing on its website that it received 500,000 euros from Fulham.“It’s very important to me that the club’s supporters rely on management during this time,” said Cruyff on Monday. “There are only three people who know exactly what is going on at the club and that includes the owner Mitch Goldhar, CEO Martin Bain and myself. Any rumors that are publicized are just pure speculation and our fans should ignore them. The professional staff will do what is necessary and will inform the public on the club’s official website when the time is appropriate.”Jokanovic apologized to Maccabi fans for leaving the club.“I know this is not an easy situation,” said the Serb. “The fans probably expected that I’d finish my job here. But this is part of life. I’m sure Maccabi is going to continue to lift trophies and compete in next season’s Champions League.”Jokanovic’s departure overshadowed Eran Zahavi’s historic night. The prolific midfielder scored four goals in a single match for the first time in his career, taking his tally this season to 18 goals in 16 Premier League matches. Zahavi scored his 46th goal overall in 2015, putting him in very prestigious company. Only Cristiano Ronaldo (59), Leo Messi (51) and Robert Lewandowski (47) have scored more goals than Zahavi over the past 12 months, with the Maccabi star currently tied with Barcelona’s Neymar and Luis Suarez, who can still add to their tally when the European champion plays for the final time this year on Wednesday.“It is never pleasant when a coach leaves, especially in the middle of a season,” said Zahavi. “But the club and the coach came to the conclusion that this would be best for both parties. Maccabi has been through a lot as a club over the past three years and the players need to adjust to any situation. The club is above all else and the players know that.”The win over Kiryat Shmona took Maccabi to the top of the standings, but its stay at the summit lasted for only 24 hours, with Hapoel Beersheba moving back into first with a 2-0 win over Hapoel Ra’anana at Turner Stadium on Monday night.Elyaniv Barda scored the opener in the 69th minute before Anthony Nwakaeme clinched the victory five minutes from time, extending Beersheba’s unbeaten streak to 11 matches with a 10th win over that stretch.