Haifa remained in last place in the table, without a goal or a win from its first five matches. 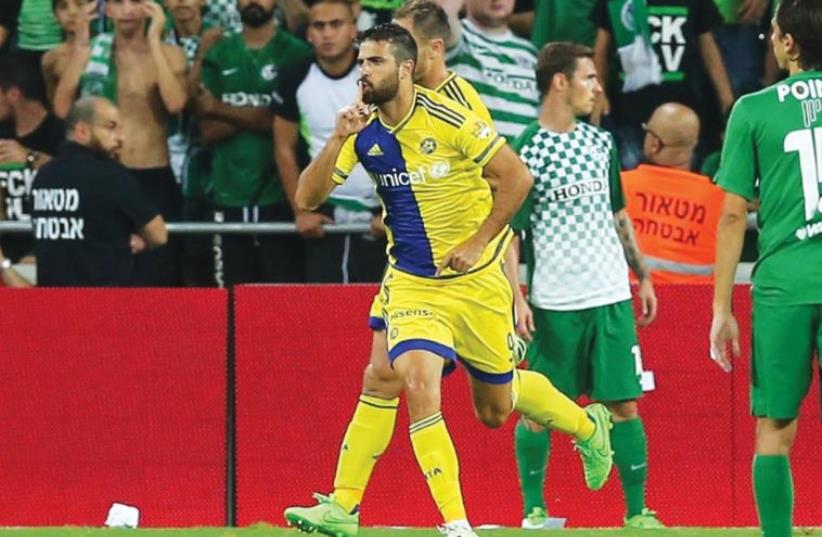 Maccabi Tel Aviv striker Eden Ben-Basat (center) celebrates after breaking the deadlock in last night’s 2-0 win over Maccabi Haifa at Haifa Stadium
(photo credit: ERAN LUF)
Advertisement
Maccabi Tel Aviv returned to winning ways in impressive fashion on Saturday night, beating Maccabi Haifa 2-0 on the road to move within two points of the summit of the Premier League standings.After drawing at Ironi Kiryat Shmona and suffering a shock home defeat to Hapoel Ra’anana, sandwiching a drubbing by Chelsea in London, Maccabi was desperate to get back on track at Haifa Stadium.Three days before it hosts Dynamo Kiev in Haifa in its second Champions League group stage match, the yellowand- blue had to wait until Eden Ben-Basat’s 82nd-minute header to break the deadlock before Dor Peretz clinched the win in stoppage time.Ben-Basat scored with his first touch of the night just seconds after coming on from the substitutes bench, netting his first league goal since February.“We didn’t deserve what happened in our last game and today we had a great performance,” said Maccabi coach Slavisa Jokanovic.“We had possession of the ball, created many chances and at the end of the game scored the goal.It’s normal that we had a bad game like last week and I must be happy with my team’s performance today. This match is now done and we have to start thinking about what is in front of us.”Haifa remained in last place in the table, without a goal or a win from its first five matches.“We reached many chances and the match could have gone either way,” said Haifa coach Roni Levy. “Had we scored the first goal the match may have ended differently. We certainly need to improve our level of play, but for that to happen we need to gain some confidence. We will continue to work hard and we are certain that the situation will change.”Hapoel Beersheba lost ground on Maccabi Tel Aviv on Saturday after suffering a surprise 1-0 defeat at Hapoel Acre. Beersheba’s star-studded lineup was expected to have more than just seven points from the season’s first five matches, but it has won only one of its past four contests after Nigerian Samuel Gilmor gave Acre all three points on Saturday with his 14th-minute winner.“This was our worst match of the season,” admitted Beersheba coach Barak Bachar. “We lost our patience too quickly and barely created any chances. We need to look into what went wrong.Acre deserved to win and this is a disappointing loss for us. We thought we would have more points at this stage. We need to check why the team isn’t functioning properly and I also need to look at myself.”Maccabi Petah Tikva’s perfect start to the season came to a grinding halt on Saturday with a 1-0 defeat at home to Bnei Sakhnin.Shlomi Azulay scored the only goal of the match in the 67th minute, giving Sakhnin its second straight victory after going winless in its first three games.Hapoel Haifa snapped a threematch winless streak with a 2-1 triumph at Maccabi Netanya. Maharan Lala (9) and Hanan Maman (75) netted for the visitors, with Gael Margulies (80) scoring the consolation goal for Netanya.Also Saturday, Ironi Kiryat Shmona and Hapoel Ra’anana drew 0-0.On Monday, Beitar Jerusalem hosts Hapoel Kfar Saba and Hapoel Tel Aviv faces Bnei Yehuda.