A win will take Maccabi back to the summit of the standings for at least 48 hours, with leader Hapoel Beersheba visiting Maccabi Haifa on Monday. 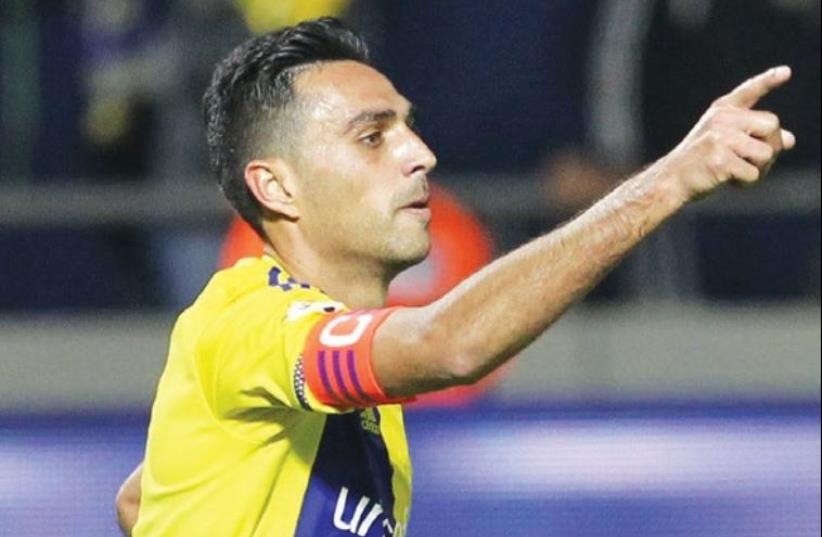 Maccabi Tel Aviv star Eran Zahavi
(photo credit: DANNY MARON)
Advertisement
With the search for a new head coach still ongoing, Maccabi Tel Aviv will be guided on Saturday by Slavisa Jokanovic’s Spanish assistant Javi Periera when it visits Hapoel Ra’anana in Netanya in Premier League action.A win will take Maccabi back to the summit of the standings for at least 48 hours, with leader Hapoel Beersheba visiting Maccabi Haifa on Monday.Jokanovic announced he is moving to Fulham of the English Championship following Sunday’s 5-0 victory over Ironi Kiryat Shmona, leaving Periera behind to guide the team until Maccabi sports director Jordi Cruyff brings in a full-time replacement.The likes of former Manchester United defender Henning Berg, who was sacked as the coach of Legia Warsaw in October, Spaniard Joan Carrillo, who was also linked with the club this past summer, and Thomas Christiansen, who currently guides AEK Larnaca in Cyprus, have all been mentioned in connection with the vacancy.In the meantime, Periera has led the side in training and will also be on the sidelines for Saturday’s match.“I’m not here to grab my opportunity,” insisted Periera on Thursday. “I’m here to help make the transition and keep control of the team and to make sure the performance level doesn’t drop.”Maccabi thrashed Kiryat Shmona after losing to Beersheba 2-1 the previous week and will be aiming to avenge one of only three defeats it has suffered this season against Ra’anana.The three-time reigning champion dropped to a shock 2-1 loss to Ra’anana for its first league defeat of the season three months ago, with Snir Shuker scoring a 90th-minute winner after Maccabi had equalized two minutes earlier.Jokanovic’s departure overshadowed Eran Zahavi’s historic night on Sunday. The prolific midfielder will be aiming to begin 2016 the way he ended 2015 after scoring four goals in a single match for the first time in his career, taking his tally to 18 goals in 16 league matches this season.Zahavi scored his 46th goal overall in 2015, putting him in very prestigious company. Only Cristiano Ronaldo (61), Leo Messi (52), Luis Suarez (48) and Robert Lewandowski (47) have scored more goals than Zahavi over the past 12 months, with the Maccabi star tied in fifth place with Barcelona’s Neymar.Also Saturday, Beitar Jerusalem hosts Bnei Yehuda, Hapoel Kfar Saba visits Maccabi Petah Tikva, Ironi Kiryat Shmona welcomes Maccabi Netanya and Bnei Sakhnin goes to Hapoel Acre. Hapoel Tel Aviv hosts Hapoel Haifa on Sunday.