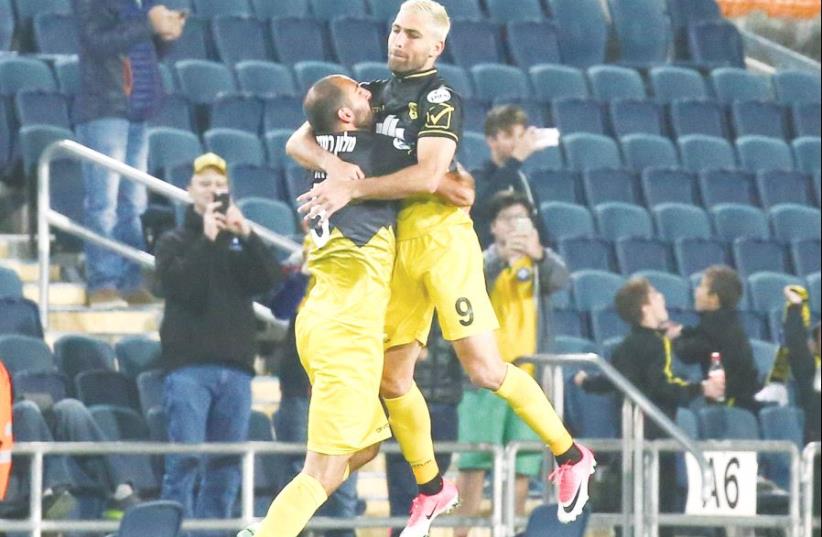 Beitar Jerusalem’s Itay Shechter and Dan Mori
(photo credit: DANNY MARON)
Advertisement
After opening a six-point gap at the top of the Premier League standings with a 1-0 win over title rival Maccabi Tel Aviv, reigning champion Hapoel Beersheba goes for its sixth straight victory when it visits Maccabi Petah Tikva on Sunday.With only eight matches remaining in the season, and with a significant advantage in goal difference over Maccabi (+46 compared to +28), Beersheba can likely afford to lose two more matches and still finish in first place even should the yellow-and-blue pick up a maximum 24 points.Despite its recent winning streak and cushion at the top, Beersheba has been far from convincing on the road this season. Four of its five wins on its current run came at home at Turner Stadium, with the team requiring a 90th-minute winner from Maor Melikson to triumph at Ashdod SC. Beersheba won just one of its previous six away matches, losing to Maccabi and Hapoel Ra’anana and drawing 1-1 at Petah Tikva.Continued struggles on the road will seriously complicate Beersheba’s title defense, with Barak Bachar’s side to play four of its next five contests away from Turner, the last of which being a visit to Maccabi.“We have eight more really tough matches and every team in the championship playoff has something to play for,” said Bachar. “We hold a six point gap, but everyone at the club knows we have plenty of work ahead of us.”After losing only once in 14 matches to take control of third place, Petah Tikva has lost three in a row, all by a 1-0 scoreline.Maccabi Tel Aviv’s match against Maccabi Haifa in Netanya gets underway 50 minutes after the kickoff in Petah Tikva, with the yellow-and-blue knowing it can’t afford any more slip-ups. Maccabi bounced back from the loss in Beersheba with a 2-1 win over Beitar Jerusalem in the State Cup semifinals, advancing to the final for a third straight year.Beitar closed within just two points of Petah Tikva with a 3-0 win over Bnei Sakhnin at Teddy Stadium on Saturday.Itay Shechter (52), Erik Sabo (67) and Idan Vered (82) scored for Jerusalem.The battle against relegation continued to heat up on Saturday, with only three points separating the bottom three teams ahead of their final four matches of the season. The bottom two will be demoted at the end of the season.Hapoel Ashkelon climbed out of the relegation zone with a 2-0 win at Hapoel Ra’anana. Josip Ivancic (31) and Raz Meir (33) scored for Ashkelon, which moved to 25 points and has still got to visit the last two, Hapoel Tel Aviv and Hapoel Kfar Saba. Hapoel Tel Aviv is one point from Ashkelon and safety after snatching a 3-3 draw at Hapoel Haifa thanks to Shahar Hirsch’s equalizer in the 83rd minute.Adilson Bahia’s sixth-minute opener for the hosts was canceled out by Omri Altman’s goal 10 minutes later and Tel Aviv moved into the lead courtesy of John Chibuike’s stunning strike in the 29th minute. Maxim Plakuschenko (43) and Maharan Lala (78) moved Haifa back in front, only for Hirsch to draw the visitors level.Hapoel Kfar Saba, which has won just one of its last 20 matches, dropped to last place following a 1-0 defeat to Bnei Yehuda.Pedro Galvan scored Bnei Yehuda’s winner in the 55th minute, moving it seven points clear of the relegation zone.Ashdod SC hosts Ironi Kiryat Shmona on Sunday.