Maccabi was desperate for a victory on Saturday, especially as it was facing Hapoel. 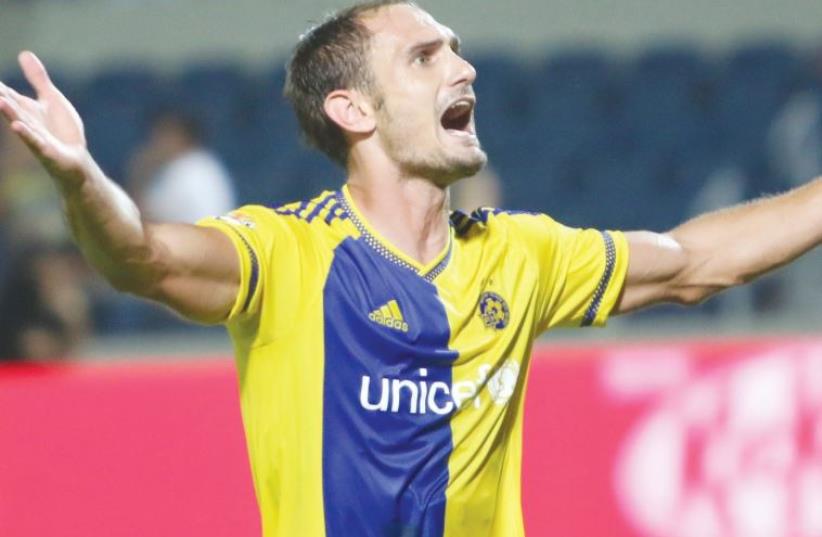 Maccabi Tel Aviv defender Carlos Garcia celebrates after scoring his team’s winner in last night’s 1-0 victory over Hapoel Tel Aviv at Bloomfield Stadium, October 31, 2015
(photo credit: ADI AVISHAI)
Advertisement
After suffering three consecutive defeats over all competitions, Maccabi Tel Aviv got back to winning ways in the sweetest of fashions on Saturday evening, beating arch-rival Hapoel Tel Aviv 1-0 in the derby at Bloomfield Stadium courtesy of Carlos Garcia’s 86th-minute winner.Following a 2-0 loss to Porto in the Champions League group stage, a 4-2 Premier League defeat to Beitar Jerusalem and a 3-1 Toto Cup setback against Bnei Yehuda, Maccabi was desperate for a victory on Saturday, especially as it was facing Hapoel.The yellow-and-blue yet again failed to impress, but Garcia’s header four minutes from time took the three-time reigning champion back to the top of the standings, at least until Hapoel Beersheba faces Maccabi Netanya on Sunday.Beersheba can return to first place with a win at Netanya.“We dominated the whole match, scoring the goal at the end of the game,” said Maccabi coach Slavisa Jokanovic, whose team hosts Porto in Champions League action on Wednesday. “Most importantly we took the three points and that’s good news for us especially winning right before the Champions League match coming up.”Jokanovic maintained his cool following the team’s three losses over nine days and didn’t get carried away with his team’s win on Saturday, stressing that the season will continue to include many highs and lows.“We had most of the control and we had many chances, we pressed and pushed especially near the end of the match and we scored from a set piece. Now it’s history and we have to keep going,” said the Serb. “We are on the top of the table with Beersheba and we’ve been playing in the Champions League with a tough schedule and a short squad. Sometimes we win and sometimes we lose. Nothing is done, only in May will the season end and there will be lots of ups and downs throughout the year.”Hapoel dropped to its third straight defeat and could fall to last place in the standings should Netanya win on Sunday.Hapoel is hoping to complete the signing of former Israel coach Eli Gutman this week, with interim coach Walid Badir set to return to his role as an assistant.“We prepared the team all week, but then we conceded a goal from a set piece and that hurts,” said Badir on Saturday.“We weren’t trying to play for a draw. I sent in attacking players and tried to win.”A stoppage-time penalty by Eliran Atar gave Maccabi Haifa a 1-1 draw at Maccabi Petah Tikva on Saturday. Haifa was aiming to combine two straight wins for the first time this season, but was ultimately more than happy to settle for a point after finding itself down a goal and with just nine men. Petah Tikva took the lead through Guy Melamed in the 41st minute and Haifa’s hopes of getting anything from the match looked to be dead and buried following the sending offs of Ofir Kriaf three minutes into the second half and Marc Valiente in the 55th minute. However, referee Daniel Bar Natan determined that Dekel Keinan was brought down in the box in a questionable call and Atar slotted in a dramatic equalizer from the penalty spot.“The players deserve credit for fighting until the last moment,” said Haifa coach Roni Levy, whose team remained just two points off the bottom of the standings. “This shows that we are strong mentally and we also have other qualities. We are heading in the right direction.”Hapoel Haifa finally claimed its first home win of the season on Saturday, beating Bnei Sakhnin 2-0 at Haifa Stadium. Tomer Swisa (21) and Tadas Kijanskas (54) scored for Haifa, with Weeam Amasha missing a penalty for Sakhnin in the 51st minute.“We had so far managed to pick up points on the road but were missing points from our home matches,” said Haifa coach Tal Banin, whose team had lost its first four home games by a combined goal difference of 1-9.Also Saturday, Ironi Kiryat Shmona and Hapoel Acre drew 0-0.Elsewhere Sunday, Bnei Yehuda hosts Hapoel Kfar Saba. Beitar Jerusalem welcomes Hapoel Ra’anana on Monday.