State Cup basketball tips off round of 16 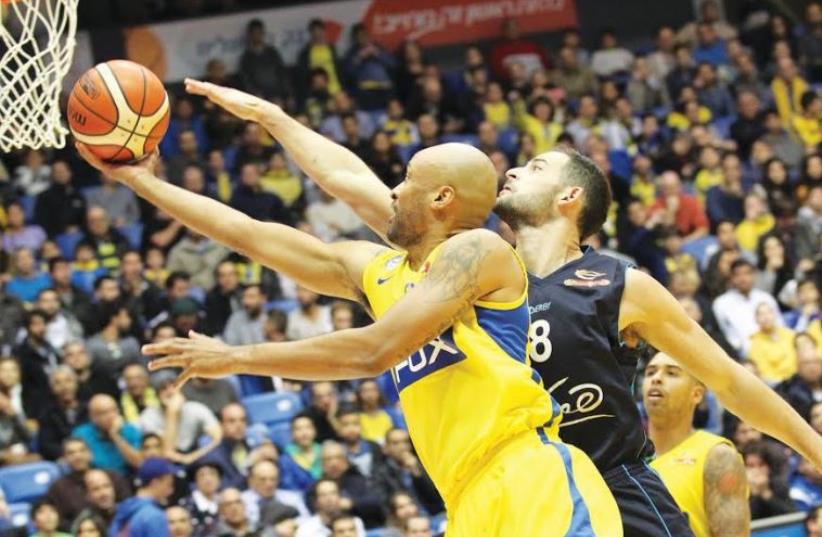 Maccabi Tel Aviv forward Devin Smith
(photo credit: DANNY MARON)
Advertisement
With its Euroleague campaign already over, Maccabi Tel Aviv’s domestic goals have all of the sudden taken on a far greater significance.Maccabi begins its State Cup campaign with a visit to Hapoel Gilboa/ Galili of the National League in the round of 16 on Wednesday, looking to take a first step towards defending the only title it claimed last season.The yellow-and-blue improved to 9-3 in the BSL on Sunday with an 88-63 win at Maccabi Kiryat Gat, but that did little to sweeten the bitter taste from last week’s painful Euroleague exit.A win in Gan Ner will also not do much to cheer up the mood at the club, but a loss would be catastrophic, especially coming on the back of its recent Euroleague dejection.Maccabi will play without Jordan Farmar on Wednesday, with the injured Ike Ofoegbu and Dagan Yivzori to also miss the game.Gilboa’s 35-year run in the top flight ended last season, but the arena in Gan Ner is set to be full on Wednesday just like in the good old days. Gilboa actually beat Maccabi 89-72 when it last visited Gan Ner last season. The northerners are currently in fourth place in the National League with an 8-2 record, winning their past three games.Gilboa, which is guided by veteran Ariel Beit-Halachmi, holds its opponents to a league-best 72.9 points per game. It only has two American players on its roster as dictated by National League rules, with Jason Sigers averaging 20.3 points per game and Demitrius Tridwill scoring 19.4 points per contest.“I like it that every game since I’ve come here is our most important game,” said Maccabi coach Zan Tabak when asked about Wednesday’s contest. “We will of course take the game seriously and try to continue our improvement and move on in the cup.”Two more round-of-16 games will take place on Wednesday, with Maccabi Rishon Lezion hosting Hapoel Eilat and Bnei Herzliya visiting Ironi Nahariya in two all-BSL showdowns.Eilat claimed a surprisingly comfortable 84-72 victory over Rishon in BSL action on Sunday, handing the latter only its third defeat of the campaign.After a tight first quarter in Eilat ended in an 18-14 lead for the visitors, the hosts scored 21 of the final 27 points of the second period to take a double-digit lead (39-28) into the interval. Eilat built on the momentum at the start of the second half, opening with a 17-5 surge to establish an unassailable 23-point margin (56-33). Alade Aminu had 23 points and 10 rebounds for Eilat, which improved to 5-7 with its second straight win. Shawn Dawson scored 16 points for Rishon, which lost for the first time in five games and dropped to 8-3.Taylor Brown is set to make his debut for Rishon, which is sweating over the fitness of Chris Wright, who missed Sunday’s game with a shoulder injury.Eilat is expected to still be without Israeli forward Elishay Kadir, but is aiming to build on its success in the cup over recent years, reaching the final two seasons ago and the semifinals last term.Also Wednesday, Herzliya will try to build on its momentum in the league when it visits Nahariya. Herzliya has won four of its past five BSL games, while Nahariya has lost three in a row.The five remaining quarterfinalists will be decided on Thursday.Hapoel Kfar Saba (National League) vs Maccabi Ashdod; Hapoel Migdal Haemek (National League) vs Ironi Ness Ziona; Hapoel Ramat Gan/Givataim (National League) vs Maccabi Hod Hasharon (National League); Hapoel Tel Aviv vs Maccabi Kiryat Gat; Hapoel Jerusalem vs Maccabi Haifa.