After winning two matches in the qualifiers and coming through the first round of the main draw, the 17-year-old Israeli was stopped by No. 5 seed Kayla Day of the USA, losing 6-4, 6-3. 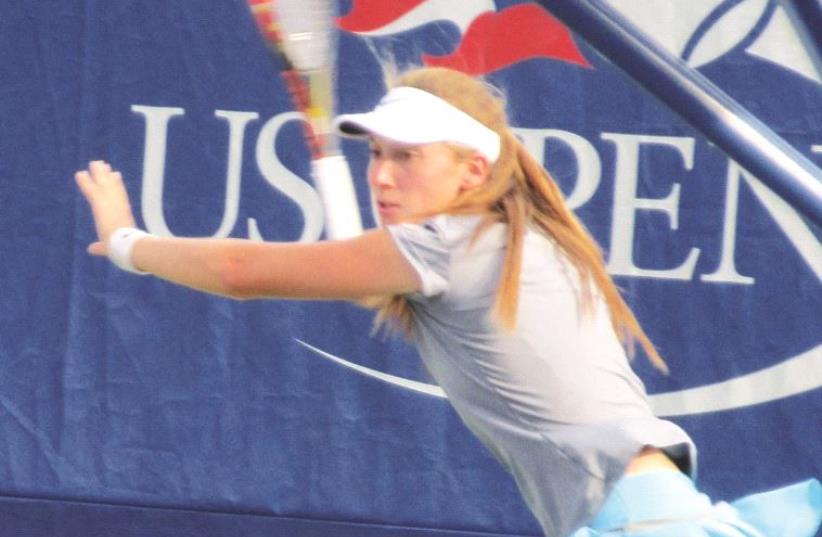 Shelly Krolitzky
(photo credit: HOWARD BLAS)
Advertisement
Shelly Krolitzky’s dream run in New York came to an end on Wednesday in the second round of the junior girls’ singles at the US Open.After winning two matches in the qualifiers and coming through the first round of the main draw, the 17-year-old Israeli was stopped by No. 5 seed Kayla Day of the USA, losing 6-4, 6-3.Despite being ranked 70 places below her opponent, Krolitzky gave Day a real run for her money before succumbing after one hour and 20 minutes.Meanwhile, Yshai Oliel has a script for winning matches in the junior boys’ tournament: Go down a set, easily win the second and fight with all of his might in the third set to win the match.Oliel battled Alex De Minaur of Australia, the tournament’s second seed, on a cloudy Flushing Meadows morning with wind gusts up to 30 MPH.De Minaur took the first set 6-4. Oliel easily won the second 6-2. In the decisive hour long third set, Oliel fended off match point, rallied to 6-6 and won 7-2 in the tie breaker.Oliel surely noticed the wind but did not change his strokes to compensate.“It was hard to play in the wind, but I am happy I didn’t focus on it. If I focused on it, I wouldn’t be able to do anything,” he told The Jerusalem Post.The usually modest, soft-spoken Oliel was proud of his victory. “I deserved to win. I wanted to win more than him.”Oliel’s mental toughness helped him defeat the recent boys’ Wimbledon singles’ finalist, even when he was trailing.“I was down 4-1 then 5-2 in the first set and had a chance to come back to 5-all but my serve was no good. He broke me and then I started fighting and kept fighting. I told myself to keep fighting and try my best and it will be fine.”Coach Jan Pochter offered similar advice from the stands. “I heard him say to keep fighting, try to be aggressive. Try your best.”The fight paid off. Oliel moves on to the third round and faces 13th seed Nicola Kuhn of Spain.Oliel’s usual script changed somewhat unexpectedly at the end of the match. Ordinarily, Oliel returns to the locker room to shower and eat.On Tuesday, admiring fans cheered and asked Oliel to sign autographs and pose for selfies. Members of the media requested two separate press conferences.And Oliel learned that his doubles match with partner Zizou Bergs of Belgian was unexpectedly moved earlier due to a walkover in the previous match.Following a slight rain delay, Oliel and Bergs easily defeated No. 8 seeds Eduard Guell Bartrina of Spain and Genaro Alberto Olivieri of Argentina 6-2, 6-2 in 52 minutes. They faced the American doubles team of Oliver Crawford and Patrick Kypson on Wednesday.