Tennis: Sela sent packing in first round of Wimbledon 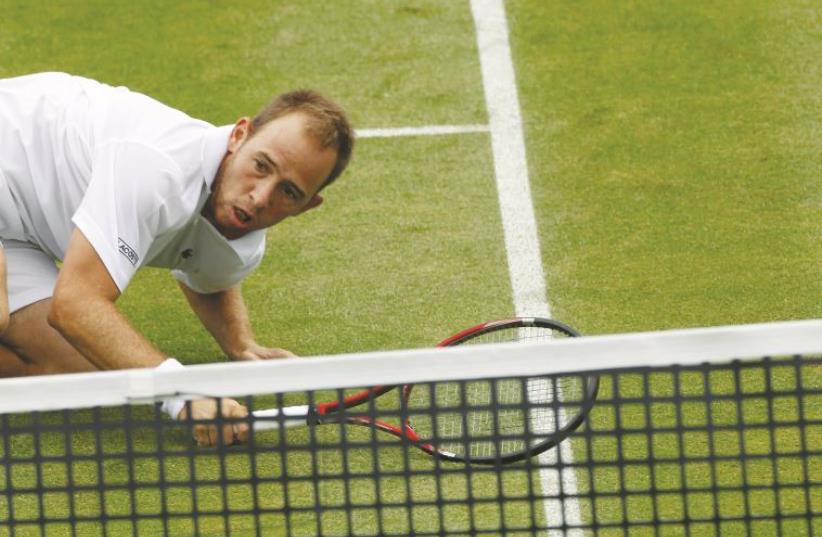 Dudi Sela falls to the grass during his first-round loss at Wimbledon
(photo credit: REUTERS)
Advertisement
Dudi Sela’s hopes of reaching the second round of Wimbledon for the first time since 2011 were dashed once more on Monday.The 30-year-old Israeli, ranked No. 85 in the world, led by a set and a break against Dominic Thiem (30), but ultimately lost 2-6, 6-3, 6-4, 6-4 to the rising star from Austria.Sela dominated the first set, racing to a 3-0 double-break lead in eight minutes. The Israeli also won the first two games of the second set, but the turning point of the match arrived in the seventh game of the set. Sela squandered two break points before losing his cool after the chair umpire ruled a Thiem shot had caught the line to Dudi’s disgust.“If you didn’t see [that], you are blind,” shouted an outraged Sela at the umpire. Sela failed to reach another break point until the end of the match, with Thiem seizing control and not relinquishing it until he completed the win with an ace.Yoni Erlich is the only remaining Israeli at Wimbledon after advancing to the second round of the doubles tournament on Monday. Erlich and German Philipp Petzschner beat Albert Ramos-Vinolas and Andreas Seppi 6-4, 6-2, 4-6, 6-3.Meanwhile, Serena Williams moved past the halfway mark in her quest for a rare calendar year Grand Slam and Novak Djokovic clicked smoothly back into gear as the 129th Wimbledon Championships opened for business on Monday.Serial title winner Williams, 33, has the Australian Open and French Open under her belt this year and her bid for a sixth Wimbledon crown began with a 6-4, 6-1 victory over Russian debutant Margarita Gasparyan.She swaggered on to Court One under sunny skies but took a while to warm to the task of chalking up a 22nd consecutive victory in Grand Slams, dropping her mighty serve in the opening game and looking rattled.World No. 1 Williams was warned for an audible obscenity when trailing 3-2 but soon transferred her aggression into some belting winners to overwhelm the world No. 113.Only two women in the professional era have won all four grand slams in the same year - Margaret Court in 1970 and Steffi Graf in 1988 - but 20-times major singles champion Williams is closing in.Djokovic elected not to play any warm-up tournaments on grass prior to arriving in south west London but the 28-year-old defending champion quickly found his feet on the slick Center Court turf against Germany’s Philipp Kohlschreiber.Like Swiss Stanislas Wawrinka, who crushed Djokovic’s hopes of completing his career Grand Slam in the French Open final, Kohlschreiber boasts a lethal backhand but the world No.33 never threatened a first-day shock to rival Lleyton Hewitt’s exit in 2003 when he was also trying to defend the title.Djokovic chose his moments to push his shoulder against the door, breaking in the 10th game of the opening two sets, and sauntered through with minimum of fuss 6-4, 6-4, 6-4.The crowd appreciated the Serb’s display, which included trying to usher a small bird off the court in the first set.Fighting tooth and nail as only he knows how, old warrior Lleyton Hewitt waved an emotional goodbye to Wimbledon after losing a five-set thriller to Finland’s Jarkko Nieminen.Thirteen years after beating Argentina’s David Nalbandian to win the title, the 34-year-old, who will retire after next year’s Australian Open, went toe to toe with fellow veteran Nieminen but went down 3-6, 6-3, 4-6, 6-0, 11-9.Spain’s Carla Suarez Navarro became the biggest name to fall, the ninth seed thrashed 6-2, 6-0 by Jelena Ostapenko.Reuters contributed to this report.