Sela beat Amir Weintraub 7-5, 6-2 in the final which was postponed by two days due to the rainy weather. 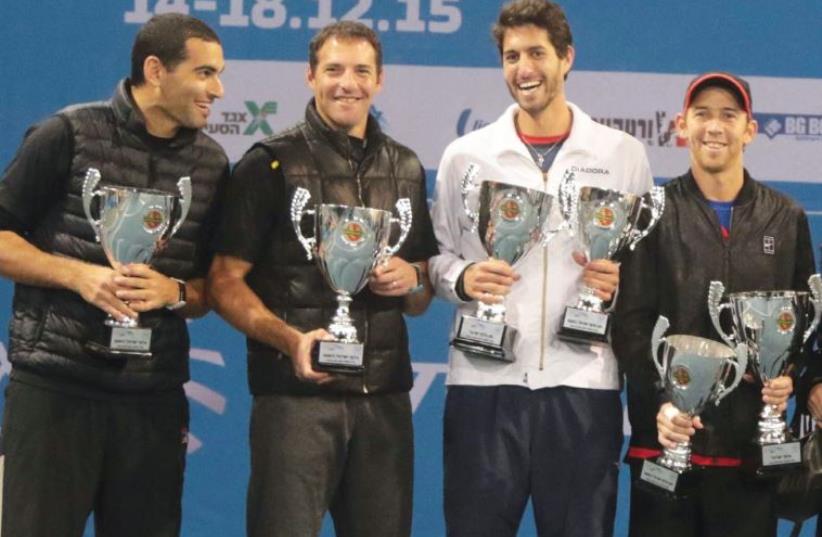 From left to right: Andy Ram, Yoni Erlich, Amir Weintraub and Dudi Sela
(photo credit: NIR KEIDAR/ISRAEL TENNIS ASSOCIATION)
Advertisement
Dudi Sela claimed his third straight Israel national tennis championship at Ramat Hasharon on Sunday before Andy Ram and Yoni Erlich capped their brief return to the court with another doubles title.Sela beat Amir Weintraub 7-5, 6-2 in the final which was postponed by two days due to the rainy weather, triumphing in a scrappy first set before lifting his level of play in the second to clinch a sixth career title.“It feels really good to be the national champion for the sixth time,” said Sela.“It wasn’t easy to play in the cold and I think neither of us played well. I think I played slightly better in the end and I’m happy I won.”Sela, ranked No. 100 in the world, faces two more weeks of preseason training before traveling to the Far East to continue his build up for the Australian Open, the year’s first Grand Slam event in Melbourne.“I also began last year ranked around No. 100 and my goal is to once more re-enter the top 50,” said Sela. “I didn’t play in many events last year because I was ill and my daughter was born, so I hope to play in more tournaments this year and achieve my goals.”Sela and Weintraub, who were meeting in the final for the sixth time in the past seven years, teamed up shortly after to face Andy Ram and Yoni Erlich in the doubles title match. Ram, who came out of retirement for a week to play with his former partner, looked rusty but the veterans still managed to secure a 6-3, 7-6 (4) victory to the delight of the local fans.“We really had fun and didn’t believe we would receive so much love,” said Ram, who insisted he has no intention of making a full-time return to the courts.“I was excited as if this was a Davis Cup match. I was worried we would be thrashed and really didn’t think we would be able to win the title.”The 38-year-old Erlich still hasn’t got any plans of retiring and will begin the new season with Colin Fleming of Great Britain, with the two looking to build on winning the Shenzhen Open in China in October.“We played really well together and I hope we can continue to do so,” said Erlich. “This was an excellent preparation for the new season and I’m looking forward to next year.”