The 15th Summer Paralympics brings together some 4,300 athletes from over 170 nations in more than 20 sports such as archery, judo and swimming. 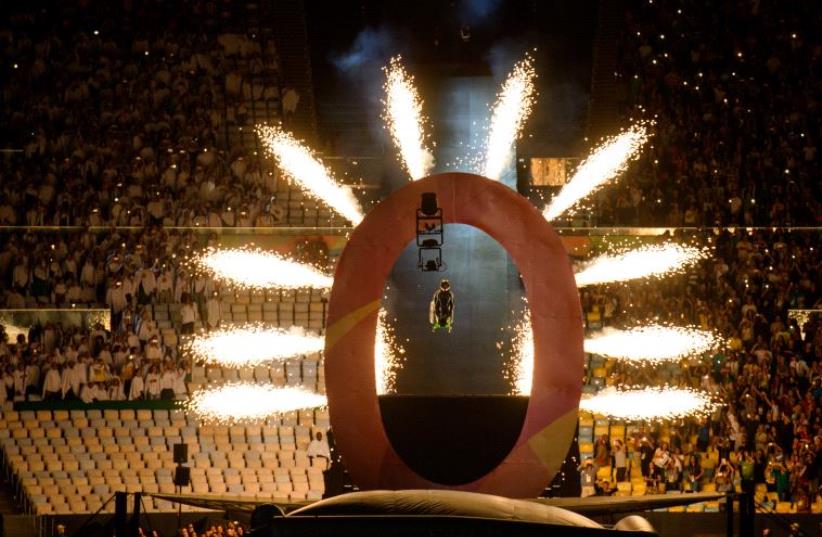 Aaron Wheelz, an extreme wheelchair athlete, goes down a MegaRamp and tears through the panel marking the start of the Opening Ceremony of the Rio 2016 Paralympic Games at the Maracana Stadium in, Rio de Janeiro, Brazil
(photo credit: BOB MARTIN FOR OIS / OIS/IOC / AFP)
Advertisement
Thousands filed into Rio de Janeiro's iconic Maracana stadium on Wednesday local time for the Opening Ceremony of the Paralympic Games under the motto "A New World".The 15th Summer Paralympics brings together some 4,300 athletes from over 170 nations in more than 20 sports such as archery, judo and swimming.Many Brazilians are excited to be hosting the event after their Summer Olympics, with the South American country calling up 285 athletes in the race for medals.Israel's 2016 Paralympic team at the game's Opening Ceremony in Rio de Janeiro"I think it will be very beautiful, more exciting than the opening of the Olympics, if that is possible. It was super exciting and I think Paralympics will be even more exciting," said local, Leide Garcia.Steven Strange came all the way from South Africa hoping to see his girlfriend Shireen Sapiro nab a swimming trifecta with her third medal in her third Paralympics."Well, it's my first Games so I am just excited to see all the athletes. I'm very excited to obviously see my girlfriend swim. I'm hoping that she can medal again. It'll be her third time at the Paralympic Games and hopefully her third medal. It's the first time I've been to something like this," said fan, Steven Strange.Brazil's Paralympics have been plagued by problems, low ticket sales, Russia's ban from the event and a funding crisis in Brazil.But setting aside the politics of the tournament, German fan Tom Schneider said he saw no problems on the ground at Olympic Park."We see many things are in development. And many people are here to help us to get any comfort. That is fine! If you are in the city it is a little bit more problematic but at the Olympic Park and here there is no problem I think," he added.The Paralympics will run from September 7 to the 18th.