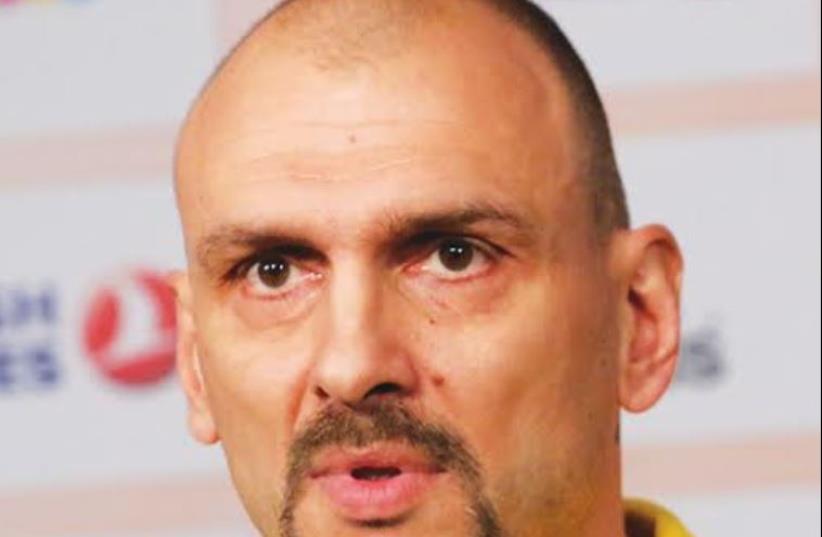 Maccabi Tel Aviv coach Zan Tabak
(photo credit: ADI AVISHAI)
Advertisement
Zan Tabak’s reign at Maccabi Tel Aviv will begin against arguably the best team in Europe on Thursday night when the yellowand- blue hosts CSKA Moscow at Yad Eliyahu Arena.The 45-year-old Croatian, who was hired as Guy Goodes’s replacement on Monday, would have likely preferred to start his tenure against almost any other opponent, especially with Maccabi in dire need of a win to keep alive its hopes of advancing to the Top 16.Maccabi won its two BSL games under assistant coach Avi Even following Goodes’s firing to improve to 5-2, but it remains in real danger of failing to qualify for the Top 16 for the first time ever after falling to 1-4 with a home defeat to Darussafaka Istanbul last week.Tabak is Maccabi’s first foreign coach since Croatian Neven Spahija guided the side in the 2006/07 season, with the yellow-and-blue paying a buyout estimated at around 100,000 euros to release the former NBA center from his contract at Montakit Fuenlabrada of the Spanish league, which he only joined this past summer.“For me to be chosen as the new coach of Maccabi is a special thing, I am proud and honored that I have been chosen as the head coach,” said Tabak. “Our first goal is to mentally pick up the players as a group and to strengthen them in order to turnaround the situation.”Tel Aviv dropped to its second- heaviest defeat in Europe since 1991 in its regular season opener against CSKA in Russia, losing 100-69.CSKA opened its campaign with four consecutive wins before losing to Unicaja Malaga last week.Maccabi is averaging just 73.8 points per game in the competition so far and is ranked bottom five in performance index rating, defensive rebounds and steals, while allowing the third-most points in the league (83.4 ppg).CSKA has the top-ranked offense in the competition (89.6 ppg, 111.2 index rating) and is the league leader in true shooting percentage (54.9%).“Maccabi has just changed the head coach and that can really shake the team,” said CSKA coach Dimitris Itoudis. “Besides, they rested several key players in the recent Israeli league game, and that shows how serious they are about our upcoming meeting.Our opponents are very talented individually and as a team. I think the new coach will also add something new to their game.”Tabak knows he will be under the microscope right the start.“Teams like Maccabi want to win everything,” added Tabak.“Our first issue is Europe and how we can compete until the last game in the regular season and reach the Top 16.”