Tricky test for blue-and-white in Bosnia 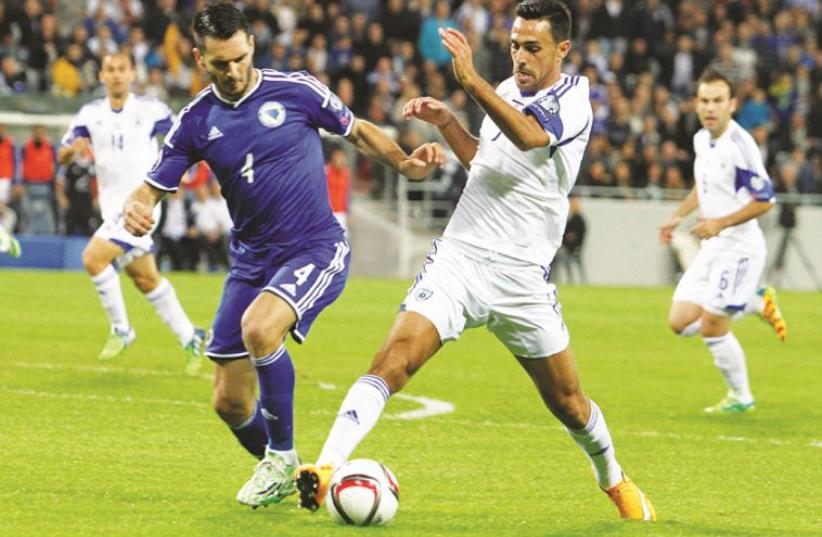 Israel’s Eran Zahavi and Bosnia and Herzegovina’s Emir Spahic
(photo credit: ERAN LUF)
Advertisement
Israel looks to kick-start its Euro 2016 qualifying campaign when it visits Bosnia and Herzegovina in Zenica on Friday night.After winning its first three qualifiers, including a 3-0 triumph over Bosnia in Haifa, the blue-and-white’s campaign suffered a significant blow in March with home defeats to Wales and Belgium.Nevertheless, Israel remains in third place in the group, two points behind co-leaders Belgium and Wales, and can take a big step towards at least securing a playoff berth by avoiding defeat in Zenica.The top two in each group qualify automatically along with the best thirdplace finisher, while the remaining eight third-place teams go into a home-andaway playoff.Bosnia sits in a disappointing fifth place with five points from five matches.Should Israel maintain a four-point gap over Bosnia and beat Cyprus and Andorra at home as expected, the Bosnians, who were favored to qualify from Group B, will need to win all four of their remaining matches, including away at powerhouse Belgium, to leapfrog the blue-and-white.Israel also still faces road matches against Wales and Belgium.Despite outplaying Bosnia last November, Israel coach Eli Gutman knows Friday’s match on the road will be a completely different story, especially with star strikers Edin Dzeko and Vedad Ibisevic set to play in Zenica after missing the encounter in Haifa.“The result of the first match doesn’t really represent the level of both teams,” said Gutman. “They play differently with Dzeko and Ibisevic, especially at home.“I can’t say I will be pleased with a draw before the match because if we concede an equalizer in stoppage time I will of course be disappointed.”Gutman believes that the team’s strategy and defensive play are what will ultimately decide Friday’s contest.“After taking a close look at the first half of our campaign, I can say that the only match in which we didn’t set the tempo was against Wales and that is something which we have to do on Friday,” added Gutman.“This is one of three roads games in the second half of the campaign and we will be the underdog in all three of them. That means we will have to be tactically perfect.”The national squad arrived in Zenica on Wednesday after a three-day training camp in Stegersbach, Austria. After much deliberation, Gutman seems set to use Maccabi Tel Aviv midfielder Eran Zahavi as a lone striker, a role he has often played for his club.Ofir Martziano is set to continue in goal, with Tal Ben-Haim and Eitan Tibi likely to play in the center of the defense, while Rami Gershon and Orel Dgani will start on the flanks. Nir Biton, Sheran Yeini and Bebras Natcho are expected to continue in the center of the field, with Tal Ben-Haim and Ben Sahar to provide support for Zahavi from the wings.“We are facing an extremely difficult match,” said Zahavi. “They really need this win and will want to avenge their defeat in Israel.”Former Maccabi Tel Aviv midfielder Haris Medunjanin, who started for Bosnia in the match in Haifa, is confident his team will triumph on Friday.“We didn’t play the way we can in Israel and everyone saw what happened,” he said. “This time we aren’t missing so many players and I believe that we will take all three points.”Elsewhere in Group B, Wales hosts Belgium, while Cyprus visits Andorra.Belgium, which is second in FIFA’s world rankings and beat France 4-3 in a friendly in Paris last weekend, is among the favorites to go on and lift the title next year. However, Wales, world-ranked 22nd, managed to eke out a 0-0 draw when the teams met in Brussels last year.