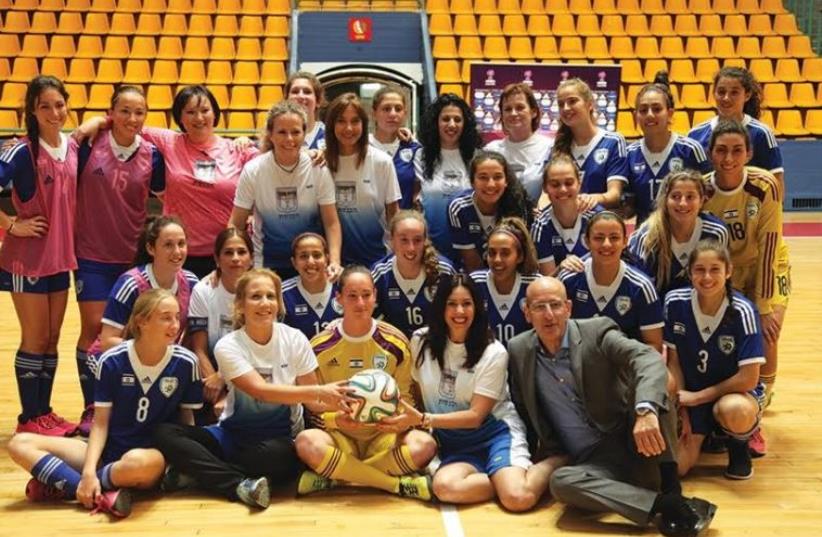 Knesset female members with Israel’s u-19 national women team players
(photo credit: Courtesy)
Advertisement
Israel’s Under-19 national women’s side met a team assembled from female members of Knesset in an exhibition match at Malha Arena in Jerusalem yesterday ahead of the start of the 2015 UEFA Women’s Under-19 Championships in Israel next week.Culture and Sport Minister Miri Regev and MK’s Nurit Koren, Tali Ploskov, Aliza Lavie, Ayelet Nahmias-Verbin, Revital Swid and Merav Ben-Ari were among those who participated in the event.‘I want to thank the MKs for showing that there is no Right or Left in sports,’ said Regev. ‘Together with my friends we will work to promote women’s sport in Israel.’ The UEFA European Women’s U-19 Championship final tournament will begin on July 15 and end 12 days later.The tournament also acts as the UEFA qualifier for the 2016 FIFA U-20 Women’s World Cup in Papua New Guinea, with the four semifinalists to qualify.Seven teams from a record-equaling field of 48 qualified joined hosts Israel, with Group A to include the hosts, Sweden, France and Denmark.England, Germany, Spain and Norway will play in Group B.The matches will take place in Lod, Ramle, Rishon Lezion and Netanya.