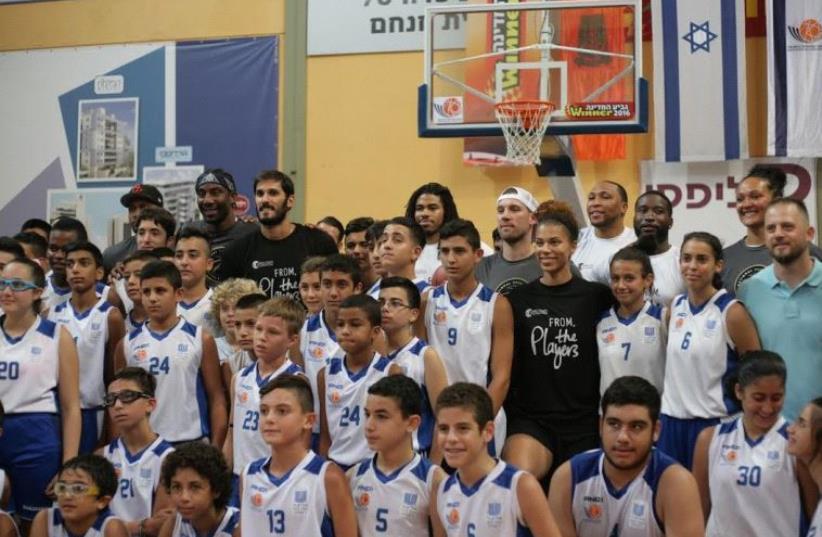 Back row, left to right: Rudy Gay, Amar'e Stoudemire, Omri Casspi, Chris Copeland, Beno Udrih, Alysha Clark, Shawn Marion, Donald Sloan, Mistie Bas
(photo credit: ELIYAHU KAMISHER)
Advertisement
Loud chants of “Omri! Omri! Omri!” filled the Ramle Sports Hall as Israeli- born basketball star Omri Casspi led a delegation of NBA and WNBA players to a basketball clinic for Ramle youth on Sunday.The clinic, sponsored by Bank Hapoalim and held in conjunction with the Omri Casspi Foundation, witnessed about 300 youth cheering with excitement and pushing for autographs while members of the Ramle youth basketball league learned techniques from some of the world’s best players.Among those in attendance were past and present NBA players Amar’e Stoudemire, Shawn Marion, Rudy Gay, Donald Sloan, Beno Udrih and Chris Copeland, as well as WNBA players Alysha Clark and Mistie Bass.The basketball clinic helps expose NBA and WNBA players to Israeli fans, Casspi told The Jerusalem Post. “We want to connect with the fans and show them that dreams can come true,” he said.Casspi hopes that trips like this will help bring a positive image to Israel.“Since our trip to Israel last year I think we’ve had a big influence,” he said. “We are hoping to change the perception of Israel.”In between chants, Ramle youth munched on sandwiches and looked on in amazement as Casspi and Stoudemire towered above their pint-size fans.Chris Copeland, who plays for the Milwaukee Bucks, led a group of 10 children in shooting drills, while Sacramento Kings small forward, Rudy Gay, was all smiles passing around the ball with the youth.Clark, who plays for the Seattle Storm, was overheard speaking Hebrew to a fan, “Cham!” she said, using the Hebrew word for “hot”.Four-time NBA All-Star Shawn Marion told the Post his trip to Israel has been “breathtaking.” It was an honor “to visit the place where it all began,” he said.This is the second annual Omri Casspi Foundation trip to Israel, which included not only NBA and WNBA players but also three-time former Ultimate Fighting Championship welterweight champion George St. Pierre and actor Jeremy Piven.Ramle Mayor Yoel Lavi spoke at the event and thanked the players for visiting Israel.“I’m sure Omri promised you that you’d have a great time... But I believe that you decided to be here because you realized that your visit is important,” he said. “First it is important for the many sports fans in Israel and especially for the younger generation. Your visit gives hope and inspiration to many young kids with big dreams.”