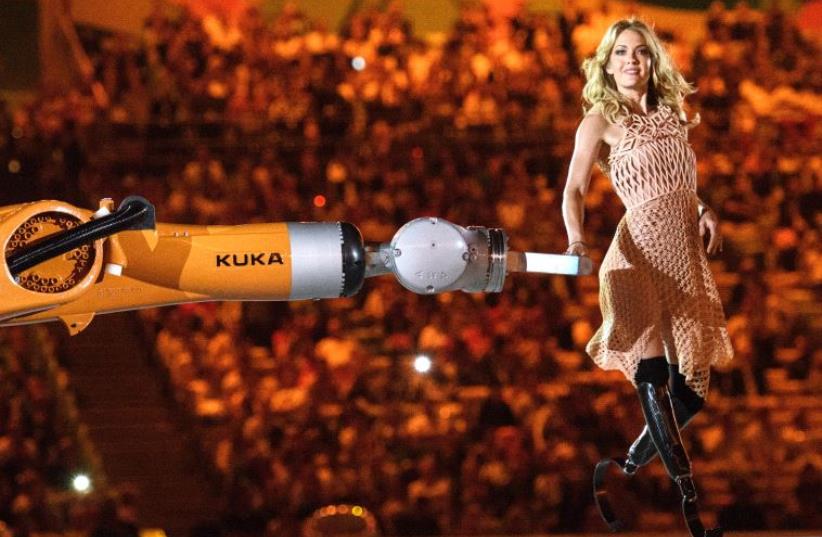 American Paralympic snowboarder Amy Purdy dances with a robot during the opening ceremony of the Rio 2016 Paralympic Games at the Maracana stadium in Rio de Janeiro on September 7, 2016
(photo credit: YASUYOSHI CHIBA/AFP)
Advertisement
Donning an Israeli-designed 3D-printed dress, American Paralympic snowboarder ‏Amy Purdy dazzled crows with her show-stopping dance at the Opening Ceremony of the Paralympic Games on Wednesday night in Rio de Janeiro.The 2014 Bronze medalist and former 'Dancing With the Stars' contestant wowed the Maracana stadium with an energetic samba-style routine performed in a blush, knit-like dress created by Israeli fashion designer Danit Peleg. "Wow. I have no words. So proud of Amy Purdy. She's dancing with my new 3D printed dress in front of hundreds of millions of people," Peleg said on Facebook following Purdy's display. The Las Vegas native had both legs amputated after contracting Neisseria meningitis at age 19. Yet, the now 36-year-old fearlessly took the stage in the technology-inspired dance alongside a robotic industrial arm for the five-minute solo that she beautifully carried out while wearing high-tech running blades.Some 4,300 athletes from more than 170 nations are in Brazil to participate in the 15th Summer Paralympics that start Thursday and run until September 18. Athletes at the Games will compete in 528 events in 23 sports.