When wheelchairs fly in Jerusalem

One man with a big heart from Chicago helped the Friendship Circle make it happen. 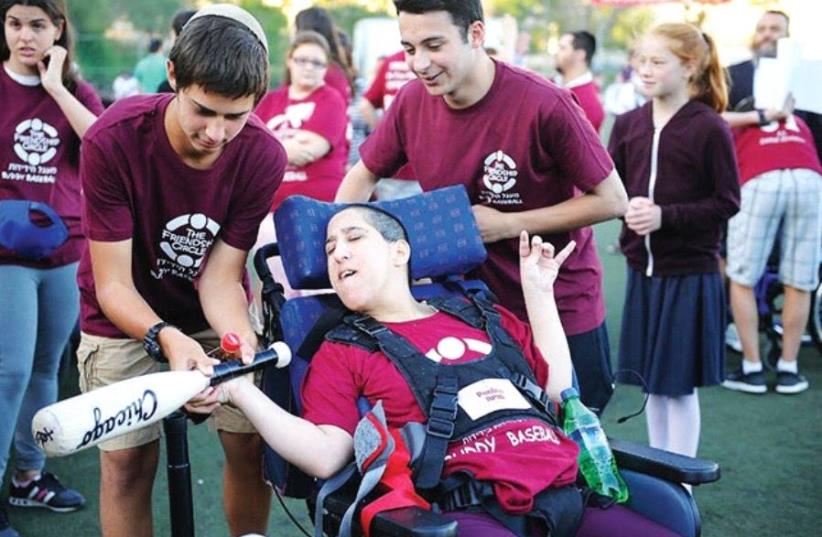 THE SECOND ANNUAL Buddy Baseball All-Star Game took place this week in Jerusalem, with over 60 players and 100 volunteers.
(photo credit: MENDY HECHTMAN/COURTESY)
Advertisement
This week, I had the privilege of attending a truly inspiring event – the Friendship Circle Buddy Baseball All Star Game! Over 60 young people with various disabilities joined together at Kraft Stadium in Jerusalem, eagerly assisted by over 100 enthusiastic volunteers who came to cheer them on, applaud, whistle and encourage them.One man with a big heart from Chicago helped the Friendship Circle make it happen. Dean Klassman – who founded Buddy Baseball in his hometown and is so passionate by the program that creates magical memories for kids with unique challenges – decided to bring Buddy Baseball to Jerusalem.Kids poured into the stadium from many different schools.Among them were children from Aleh Yerushalayim whom Friendship Circle brought to the game with private buses to participate.Guest of honor MK Orly Levy was greeted by resounding applause as she stipulated that “children with disabilities are children like any typically developing children. They have feelings, know laughter, sadness and pain, and also deserve to be included in any thing our children would do. The joy of playing sports with a buddy.”She applauded the volunteers for their unconditional friendship.City Council member Fleur Hassan- Nahoum, noted that “today was a day showing what people can do, not what they can’t do.”Hassan-Nahoum praised the Friendship Circle children who are a model to all that “everyone can play baseball, with hands or feet, and wheelchairs are not a limit, just a challenge to be overcome.”Each of the young participants felt like a hero – running from base to base, assisted by their special buddy.Even the sky wasn’t the limit when 15 of the young participants in wheelchairs were escorted, their chairs whizzing around the field, cheered on by the proud spectators as if they were participating in an Olympic event.Coach Klassman – together with his wife Leslie and local coach Avraham Gestetner – led the game in the most incredible and lively manner, revving up the crowd and empowering the children.The children’s names, beautifully designed and displayed on bright posters, were each announced to the crowd before the kids hit the ball with all their strength (some did so with their hands, some did so with their feet.) The crowd went wild as they rounded the bases and reached home plate.The smiles on their faces were indescribable, reflecting pride and joy at their accomplishments! This was matched only by the gratification on the parents’ faces, as we witnessed our children’s personal achievements (being recognized in an activity previously considered to be totally out of reach.) In fact, I think this is the first time that my child has ever had the opportunity to play on a sports field.The players were each awarded their own baseball and gold medal as their names were announced individually to roaring applause from the crowd.A BBQ followed, dedicated to recognizing the efforts of all participants.Credit for the Buddy Baseball initiative goes to Coach Klassman – a man passionate about sports inclusion for children with unique challenges who had a dream that our kids should also be able to have the same sporting opportunities as everyone else in the community.Last year, on his first trip ever to Israel, he founded the Friendship Circle All Star Buddy Baseball game, together with Friendship Circle Central Jerusalem, with extraordinary energy and enthusiasm. Heartfelt gratitude to FC Jerusalem and their dedicated team of staff and volunteers, who with determination and hard work embraced Coach Klassman’s vision! For the second year running, they have made Buddy Baseball an inspiring reality here in Jerusalem. May Friendship Circle go from strength to strength in all their endeavors for our special wonderful children. I am sure that every player of Buddy Baseball Jerusalem will savor and cherish these magical memories for a long time to come.