The diverse team – including many Israeli born players alongside American immigrants – is made up of players competing in the eight-team Kraft Family Israel Football League. 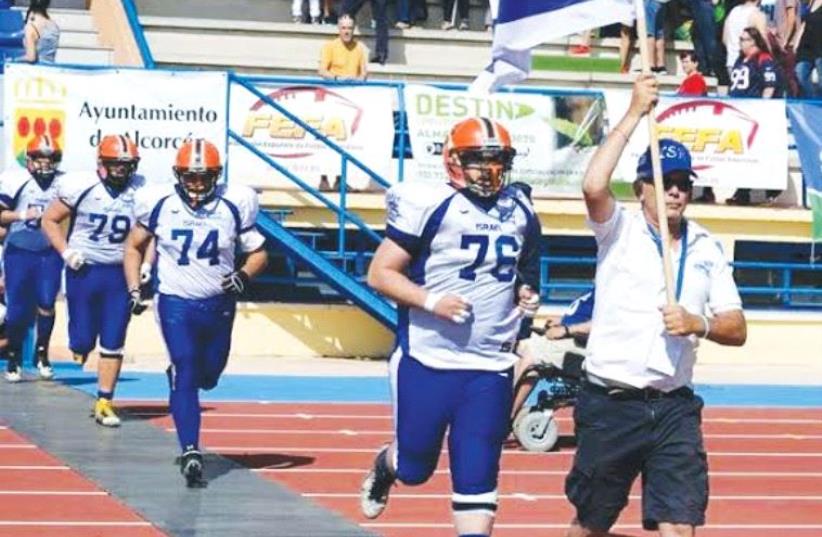 AMERICAN FOOTBALL IN ISRAEL president Steve Leibowitz leads the national tackle football team onto the field to face Spain in its only previous international match before this weekend’s European Championship qualifying tournament in Italy.
(photo credit: AFI COURTESY)
Advertisement
The Israel national tackle football team traveled to Lignano, Italy, this weekend to compete in a four-team European Championship Qualifying Tournament.Forty-five players, and 18 coaches, trainers and Federation officials took the trip.On Friday, Israel will face off against host Italy, while later in the day Serbia takes Switzerland in the same venueOn Sunday, the two winners from Friday will duel for the tournament championship, while the remaining two teams will compete for third place.The tournament winner will face either Denmark or Sweden next year, and the victor in that game will qualify for the European Championship in 2018 along with the best six teams on the continent including Germany, Austria, France and Finland which have already qualified.  Israel is new to international tackle football. The journey started last year when Team Israel traveled to Madrid and defeated Spain 28-20 to reach the EC Qualifying Tournament.Playing two games in three days is a challenge for any football team and a full 45-man roster was required.Israel Football Federation President Steve Leibowitz said that the organization and financing of such a large team was a daunting task.“To my knowledge this is by far the largest Israeli team ever sent abroad in any sport.”The diverse team – including many Israeli born players alongside American immigrants – is made up of players competing in the eight-team Kraft Family Israel Football League.The team’s head coach is Yonah Mishaan who was a standout player and coach in the IFL. US coach Eric Cohu is assisting Mishaan and brings years of coaching experience from the United States.Still, the challenge is formidable.“We have only 10 years of experience in tackle football, and only one international game under our belts and we are playing much more experienced teams which larger and stronger leagues to draw players from,” said MishaanUndaunted by the challenge, the coach added, “We have very talented and hard-working players and we are going to Italy determined to win.”The trip to Italy is a very costly venture. The team has a series of high profile sponsors that include New England Patriots owner Robert Kraft, Minnesota Vikings owner Mark Wilf, hedge fund owner Henry Swieca and a group of donors affiliated with the Pro Football Hall of Fame that includes several Gold Jackets.Some of the top players on the team include:Doni Eastman – An American immigrant who won three straight MVP awards playing for the reigning champion Judean Rebels in the IFL and was the MVP in Israel’s victory over Spain. Eastman has been moved from receiver and safety to quarterback.Yuval Fenta – Israel’s top running back is the child of Ethiopian immigrants to Israel. Fenta won two MVP awards in the High School IFL playing for the champion Kfar Saba Hawks. He was offensive player of the year in 2015 playing for the Tel Aviv Pioneers.Ahmed Abu Gaber – A rookie from the Arab village of Kfar Kassem, Gaber is a standout defensive player for the Petah Tikva Troopers. He brings exceptional speed and toughness to the defensive line.Yaniv Kovalski – Israel’s top offensive lineman, Kovalski is an all-IFL player for the champion Judean Rebels.