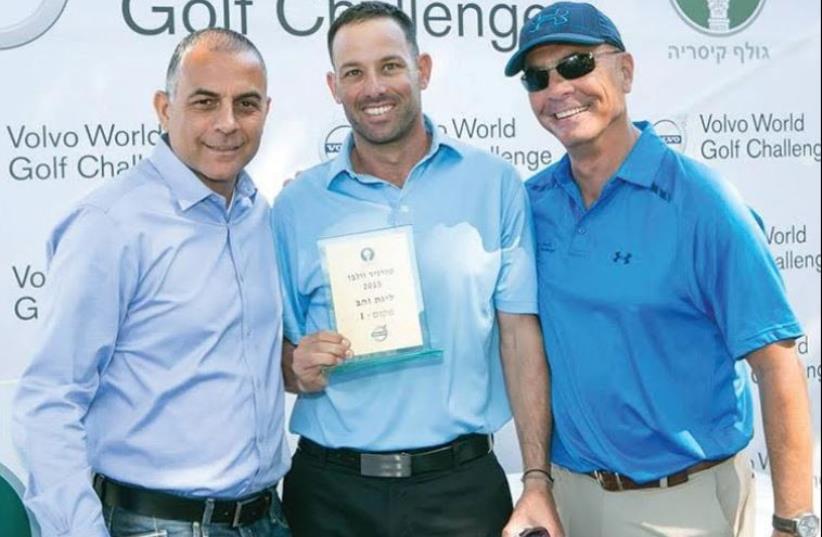 Volvo Caesarea winner Uri Eilan
(photo credit: Courtesy)
Advertisement
More than 100 golfers took part in the annual Volvo Tournament at Caesarea Golf Club on earlier this month.As winner of the Gold Division (with a score of 39 Stableford points), Uri Eilan was crowned 2015 Tournament Champion. He received a surprise package of Under Armour products courtesy of Volvo. More importantly, Eilan also received an airline ticket to Shanghai, China, where he will represent Israel in the 2016 Volvo Challenge Tournament to be held next January.Meir Asayag won a playoff to take second place with 34 points, while third place went to Gil Deri with 32 points.Silver League winner Micah Knitz (34 points) also took home a package of Under Armour apparel. Makbel Shuftania came in second place on 33 points. Hannah Berzag was one point back in third.Barry Zimmerman’s ball stopped 2.87 meters from the hole, earning him nearest-to-the-pin honors. Michael Forge hit the longest drive among the men, while Eden Bichachi’s drive finished ahead of all the other women competitors.Simcha Cohen’s win in the lottery entitled him to experience a weekend of driving one of the many Volvo models, a gift of the Meir Group.