Without top stars, Israelis fail to medal in Poland

Many of Europe’s top judokas skipped the first major continental championships since the Rio Olympics, with the Israel delegation also missing its biggest stars. 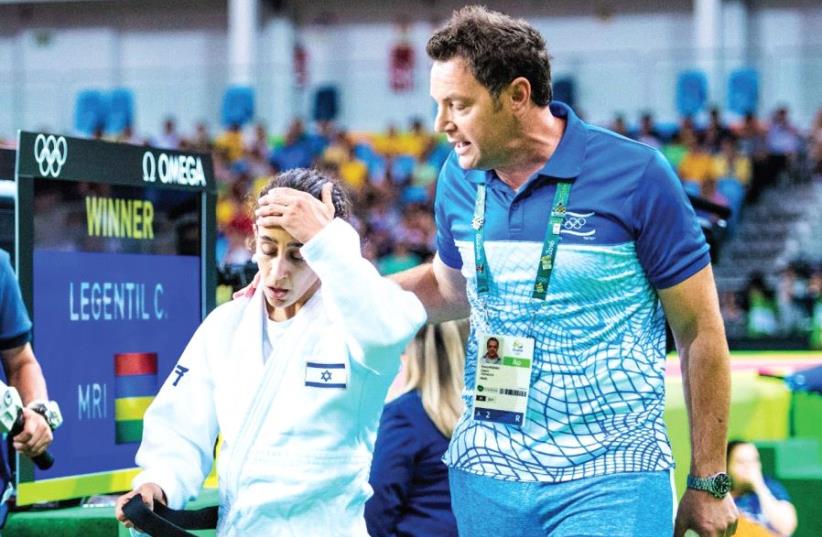 Gili Cohen (left) was one of the Israel delegation’s biggest disappointments at the European Championships in Warsaw, with none of women’s national team coach Shani Hershko’s (right) judokas managing to scale the podium
(photo credit: ASAF KLIGER)
Advertisement
Israel’s judo delegation ended the European Championships in Warsaw, Poland, without a medal after its final two representatives failed to scale the podium in the last day of the individual competitions on Saturday.Peter Paltchik reached the quarterfinals of the under-100 kilogram event on Saturday, but a defeat to eventual gold medalist Elkhan Mammadov of Azerbaijan sent him to the repechage and a loss to Russia’s Kirill Denisov meant he ended the day in seventh place.Tohar Butbul finished fifth in the men’s under-73kg contest on Friday, suffering a painful defeat to Sweden’s Tommy Macias in the battle for the bronze medal after losing to Russia’s Musa Mogushkov in the semifinals.Three other Israelis came within one win of scaling the podium in the opening day of the event on Thursday. Baruch Shmailov (under 66kg competition), Gili Cohen (U52) and Noa Minsker (U48) all finished in a frustrating fifth place.Many of Europe’s top judokas skipped the first major continental championships since the Rio Olympics, with the Israel delegation also missing its biggest stars.Olympic medalists Yarden Gerbi and Ori Sasson are both recovering from injuries, with fellow Olympians Sagi Muki and Golan Pollack also sitting out the championships in Warsaw.They will all be desperate to compete in the continental championships next year as they are set to take place in Israel. The Israel Judo Association has yet to decide if the event will be held in Tel Aviv or Jerusalem after being selected as the host of the 2018 edition by the European Judo Union.Israel hosted the under-23 continental championships in Tel Aviv last November and the success of the event convinced the EJU to hand the Israel Judo Association the right to organize the continent’s most prestigious competition.IJA chairman Moshe Ponte pleaded for funding after the EJU’s announcement. Minister of Culture and Sport Miri Regev allied his fears and guaranteed that the government will provide the required assistance so that the championships will be held in Israel next year.“I’m happy that I’ll finally get the chance to compete in Israel,” said Gerb