Maccabi entered the game with an 8-0 record this summer after beating Milano 85-79 at the United Center in Chicago three days earlier. 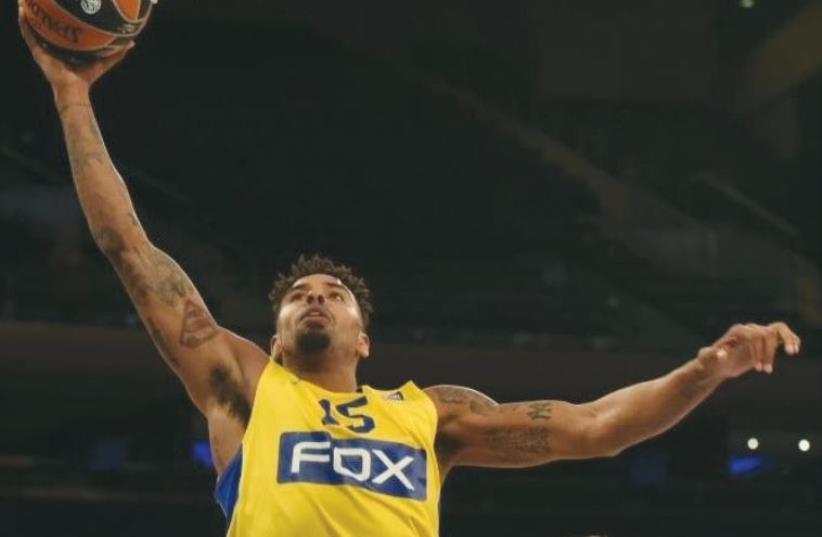 Maccabi Tel Aviv forward Sylven Landesberg goes up for a layup against Olimpia Milano at Madison Square Garden in New York
(photo credit: NOAM GALAI/MACCABI TEL AVIV)
Advertisement
Despite seeing his team’s perfect preseason come to an end, Maccabi Tel Aviv coach Guy Goodes said he is pleased with the yellow-and-blue’s preparations for the new campaign following Sunday’s 76-72 defeat to Olimpia Milano at Madison Square Garden in New York.Maccabi entered the game with an 8-0 record this summer after beating Milano 85-79 at the United Center in Chicago three days earlier.The teams were tied at 57-57 ahead of the final 10 minutes on Sunday, but Milano regained control down the stretch.Sylven Landesberg led Maccabi with 15 points, with Jordan Farmar adding 13 points and seven rebounds.Robbie Hummel and Kruno Simon scored 15 points apiece to lead the Italians.“This was a good tour, but it wasn’t easy,” said Goodes.“It was important for us to play against a Euroleague team so these two games against Milano were very good for us. We saw a lot of qualities in our team, but we also saw some things we will need to improve in the coming days ahead of the start of our campaigns in the BSL and the Euroleague.”Maccabi opens its BSL campaign against newly-promoted Maccabi Kiryat Gat on Saturday, before visiting CSKA Moscow in its Euroleague opener five days later.During the game on Sunday, Maccabi honored six of its legends: Tal Brody, Earl Williams, Derrick Sharp, Anthony Parker, David Blu and Nikola Vujcic.Maccabi’s Croatian phenom Dragan Bender impressed yet again, bringing much of the crowd to its feet after blocking Alessandro Gentile before adding a three-pointer that helped Maccabi to a 16-12 lead after 10 minutes.However, Maccabi would allow Milano to score 26 points in the second period and trailed 38-31 at halftime.Brian Randle’s free throws brought Tel Aviv within three points with 26.5 seconds left, but Milano held on for the win.“We finished a long and important tour,” said Maccabi captain Guy Pnini. “It is always special to play in arenas like the United Center and Madison Square Garden. We enjoyed meeting the local Jewish communities and being supported by a crowd which was mostly Jewish-Israeli.”Around 8,300 fans were at MSG on Sunday, with around 9,000 attending the game in Chicago three days earlier.“It was important to test ourselves against a quality Euroleague opponent,” added Pnini. “We have reasons for optimism, but clearly we also still have a lot of work. After a long preseason we are ready for the real thing.”