Maccabi has got two more matches to make sure it doesn’t end the group stage without a point. 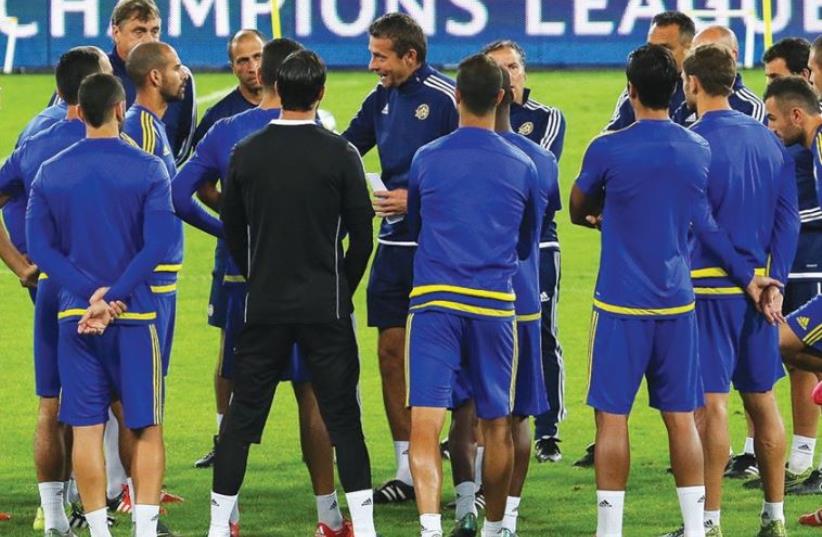 Maccabi Tel Aviv coach Slavisa Jokanovic (center) talks to his players at a training session
(photo credit: ERAN LUF)
Advertisement
After finally scoring its first goal in the Champions League group stage, Maccabi Tel Aviv continues its search for a first point when it hosts Chelsea at Haifa Stadium on Tuesday night.The yellow-and-blue ensured it won’t join Maccabi Haifa in infamy after scoring its first goal of the campaign in a 3-1 defeat to Porto at Haifa Stadium three weeks ago.However, it remained rooted to the bottom of Group G with a 1-11 goal difference following its fourth loss in four matches.Eran Zahavi’s penalty in the 75th minute released a lot of pressure at the club, ensuring the 2009/10 Maccabi Haifa will remain the only side in the history of the competition to end the group stage without picking up a point or scoring a goal. Nearly five years had elapsed since an Israeli team last scored in the group stage, with Zahavi also netting that goal for Hapoel Tel Aviv in the 2-2 draw at Lyon on December 7, 2010.Maccabi has got two more matches to make sure it doesn’t end the group stage without a point, starting with Chelsea on Tuesday before completing its campaign at Dynamo Kiev in two weeks.Chelsea thrashed Maccabi 4-0 in their group opener at Stamford Bridge, but Tel Aviv coach Slavisa Jokanovic is certain the English champion will not be complacent on Tuesday, especially as it requires the points to secure its progress.With seven points, three behind leader Porto, Chelsea will qualify for the knockout rounds if it wins and Dynamo Kiev fails to do the same in Portugal.“It is an important game for them,” said Jokanovic. “We are improving but at the moment it isn’t enough for us to win a game or take a point. We are not satisfied that we have no points. I expect that we will continue to improve and be more competitive and try and take a point or win the game.”Chelsea beat Norwich 1-0 in Premier League action on Saturday, but the Blues are still only 15th in the standings following their poor start to the season, which has already seen them lose seven times.“Chelsea is the champion of England and this squad has won many games,” said Jokanovic. “They have a great squad and a great manager and they will find a way to get back on track in the Premier League.“For us it is a really important day,” he added. “I don’t care about Chelsea or their problems. I’m really focused about my job and understand what is in front of us. We have a nice chance in front of us and we will try to take what we can from the game. I expect that we will display our best performance.”Chelsea manager Jose Mourinho believes Tuesday’s showdown will be very different to the match between the teams at Stamford Bridge.“Normally inexperienced teams in the Champions League feel much more comfortable at home and when they go away it is more difficult,” said Mourinho. “I think Maccabi paid that price at Stamford Bridge. I think Maccabi’s results against Porto and Dynamo could have been completely different. They started very well against Porto and had chances and then one defensive mistake changed everything. I think the game will be a lot more difficult for us. I’m not thinking this will be a game like at Stamford Bridge.”Mourinho said he is not worried about the security situation in Israel and is focused on Tuesday’s “crucial” match.“The game is a lot more important for us than Maccabi,” he explained. “We are playing to qualify but I know they will come with everything they have and will try to take points.”