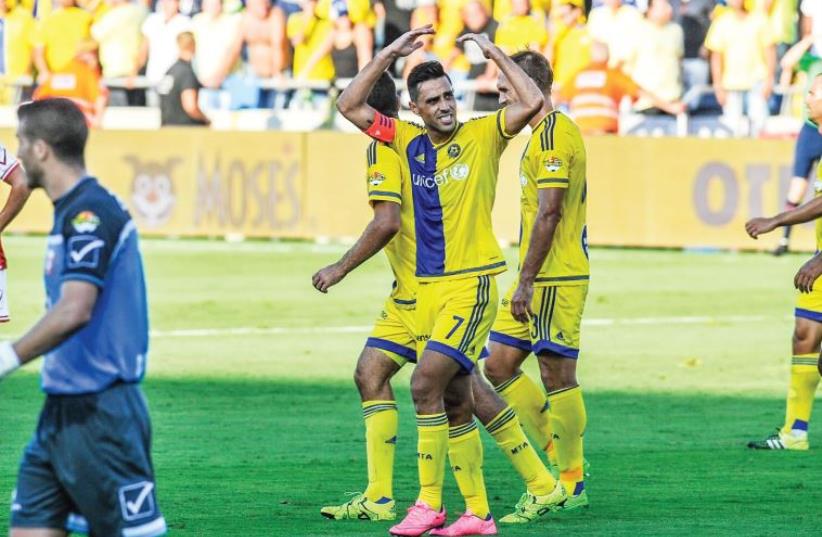 Maccabi Tel Aviv midfielder Eran Zahavi (center)
(photo credit: ASAF KLIGER)
Advertisement
Eran Zahavi continued his prolific ways to ensure three-time defending champion Maccabi Tel Aviv got its Premier League title defense off to a winning start on Saturday, while Maccabi Haifa is already facing an early crisis after dropping to a shock 3-0 defeat to newly-promoted Bnei Yehuda.Zahavi scored twice to make it six goals in a week, and more importantly, secure a 3-2 win over Bnei Sakhnin at Bloomfield Stadium.With the Champions League playoffs second leg against FC Basel on Tuesday being the yellow-and-blue’s main focus, coach Slavisa Jokanovic made seven changes to the lineup which drew 2-2 in the first leg in Switzerland last week.However, he didn’t risk leaving out Zahavi, who brought Maccabi back on level terms in the 22nd minute on Saturday after Sakhnin’s Brazilian midfielder Georginho gave the visitors a shock lead 12 minutes earlier.Winger Tal Ben-Haim moved Tel Aviv in front in the 67th minute, seven minutes after coming on as a substitute, before Zahavi wrapped up the points in the 81st minute. Maccabi lost Nikola Mitrovic to a red card in the 87th minute and Weeam Amasha handed Sakhnin a lifeline in stoppage time, but it was too little too late for the visitors.“It is important to start with three points, but I can’t be satisfied with our performance today,” said Jokanovic. “We made many mistakes and nobody forced us to make mistakes.We need to play at a better level in the future.”As usual, Maccabi Haifa entered a season with high expectations, but as has often been the case in recent years, it didn’t wait long to break the hearts of its fans. With coach Roni Levy back on the sidelines and the likes of Yossi Benayoun, Eliran Atar and Hen Ezra on the pitch, the Greens were firm favorites to win at Sammy Ofer Stadium.However, Thierry Doubai gave Bnei Yehuda the lead after 31 minutes and six minutes later, Almog Buzaglo, brother of Hapoel Beersheba and Israel midfielder Maor, doubled the advantage to silence over 28,000 fans.Levy substituted both Atar and Benayoun at halftime, but it was Bnei Yehuda which netted the only goal of the second half, with Pedro Galvan putting the icing on the cake in the 60th minute.“This is a big disappointment for everyone at the club,” said Levy. “A lot didn’t work and we will have to fix it. They wanted to win more than us and we were punished.”After a seven-year hiatus from the top flight, Hapoel Kfar Saba was on the verge of opening the season with a win, only to concede two late goals to draw 2-2 at Hapoel Ra’anana.Reef Messika scored twice (19, 58) to put Kfar Saba in the driving seat. However, Mamadou Thiam netted from the penalty spot in the 90th minute after Kfar Saba’s Dino Skvorc fouled Yosef Abu Laben in the box and was sent off, with Adi Nimni equalizing in the fourth minute of stoppage time.Maccabi Petah Tikva beat Maccabi Netanya 1-0 on Saturday thanks to Gidi Kanyuk’s (31) winner, while Hapoel Haifa defeated Hapoel Acre 1-0 courtesy of Tadas Kijanskas’s (66) strike.On Sunday, last season’s runner- up Ironi Kiryat Shmona hosts Hapoel Beersheba, which finished in third. Beitar Jerusalem welcomes Hapoel Tel Aviv at Teddy Stadium on Monday.