Zilberman’s participation in the competition lasted just 34 minutes on Tuesday. 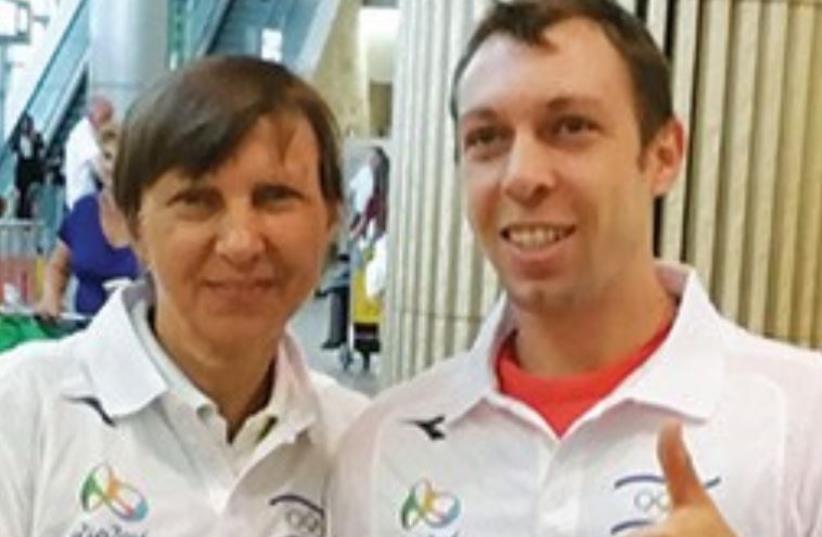 Israeli badminton player Misha Zilberman, along with his mother and coach Svetlana, arrived back in Israel yesterday after their short – yet controversial – visit to Jakarta, Indonesia
(photo credit: Courtesy)
Advertisement
Israeli badminton player Misha Zilberman returned home on Thursday and claimed that Indonesian authorities tried to “break him and humiliate him” and that he received death threats before finally being granted entry to Jakarta to play in the world championships.Zilberman’s participation in the competition lasted just 34 minutes on Tuesday, with the 26-year-old Israeli, who took part in the London 2012 Olympics, losing 21-14, 21-14 to Jen Hao Hsu of Taiwan in the first round. He arrived in the world’s most populous Muslim country (with approximately 205 million Muslims – almost 13% of the world’s total) just a day earlier after spending several weeks practicing in Singapore while waiting for his visa request to be approved.Despite filing his initial application six months ago, Zilberman was turned down by Indonesian officials time and again. However, the efforts of the Olympic Committee of Israel and Israeli International Olympic Committee member Alex Gilady ultimately bore fruit, with Badminton World Federation Secretary General Thomas Lund flying to Singapore in order to escort Zilberman to Indonesia on Monday.Israel and Indonesia do not have formal diplomatic ties and it is difficult for Israelis to visit the country.The Israeli flag wasn’t present in the arena in Jakarta alongside the flags of the rest of the participating countries, with Zilberman’s match being moved forward to the start of the day due to security concerns.Nevertheless, Zilberman believes his battle to participate in the world championships was worthwhile as it proved that sports ultimately always overcome politics.“This was one of the toughest moments of my life,” said Zilberman upon his arrival at Ben-Gurion Airport.“Fortunately I had a lot of support and I want to thank everyone who helped. The Indonesian authorities tried to break me and humiliate me. I received a lot of threats, on Twitter and Facebook as well. ‘You won’t get a visa’, ‘we will kill you’, ‘you shouldn’t come here’. I don’t think that those responsible for that were sports people. I’m certain that anyone involved in sports wants to give everyone an equal opportunity to compete.”Zilberman explained how difficult it was for him to play after his preparations were completely derailed by the visa delay.“I was granted entry to Indonesia on Monday and had to play the next day,” he said. “I arrived at 8:00 p.m. but instead of allowing me to recover and letting me play later the next day, my match was brought forward and I had to already leave at 7:00 a.m. for the arena. I had no chance. For these types of events you need to arrive 3-4 days in advance in order to prepare properly. I think their goal was to delay me in order to hurt me.“From a certain stage the professional side wasn’t the goal anymore,” Zilberman added. “What was important was to show that I’m here even though they tried to break me. To show that sports beat politics.”