Zubari ends windsurfing World Championships on a high in Eilat 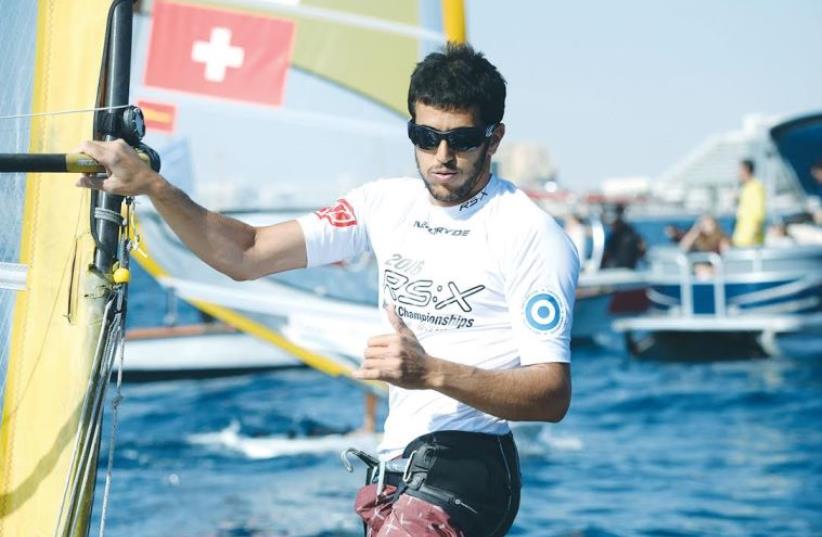 Israeli windsurfer Shahar Zubari
(photo credit: AMIT SHISEL / EILAT MUNICIPALITY)
Advertisement
Shahar Zubari ended the 2016 RS:X windsurfing World Championships in Eilat on a sweet note on Saturday, winning the medal race to finish the event in sixth place overall.The bronze medalist from the 2008 Beijing Olympics lost all hope of claiming a medal in his hometown after falling to eighth place on Friday, but at least managed to win the final race of the competition to take a significant step towards securing Israel’s lone berth in the men’s windsurfing competition at the Rio 2016 Olympics. His main rival for the ticket to Brazil, Nimrod Mashiah, dropped to 27th place on Saturday, failing to pick up any points in the head-to-head battle between the two. Zubari collected 15 points to move to 22 overall compared to Mashiah’s 11.25 ahead of the fifth and final test event to decide Israel’s representative in Rio to be held in Palma de Mallorca at the end of March.With 25 points on offer for a gold medal in Mallorca, 20 for a silver and 15 for a bronze, Mashiah will have to finish on the podium next month to have any chance of overtaking Zubari, who is targeting a third straight appearance in the Olympic Games.“It was a very tough week and I had many ups and downs,” said Zubari.“I don’t think these championships were a disappointment for me because I was up against the best surfers in the world.”Zubari was especially pleased at opening a gap over Mashiah, but he is taking nothing for granted.“Nothing is over until it’s over,” said Zubari. “As we saw in the campaign for London 2012, anything is possible.”Poland’s Piotr Myszka won the gold medal in Eilat.In the women’s competition, Noga Geller finished first among the Israelis in 14th place overall, while Ma’ayan Davidovich, a two-time bronze medalist in the Worlds, ended the event in 19th. Hadar Heller was 20th, but second among female surfers under the age of 21, with Noy Drihan in 21st and third among the youngsters.Poland’s Malgorzata Bialecka won the women’s event.