Besides working with Ethiopian-Israelis MEPI has also partnered with Hardei groups, Arab-Israelis, and others. 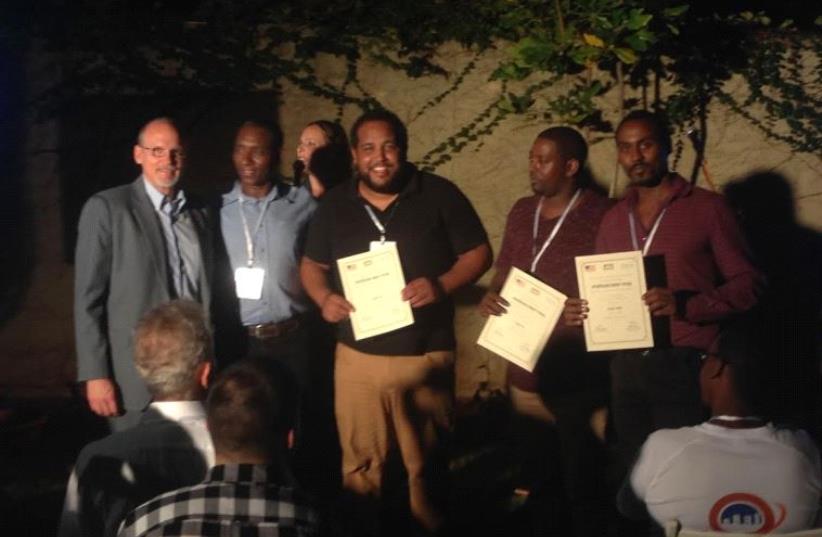 Thomas Genton Counselor for Press and Cultural Affairs at U.S. Embassy, Naftali Avraham CEO Tech-Career, Erez Akale (Za-Atoot), Tal Akalo (Za-Atoot), Tomer Avera (Za-Atoot)
(photo credit: ELIYAHU KAMISHER)
Advertisement
In the affluent neighborhood Kfar Shmaryahu north of Tel Aviv, three high-tech startups made business pitches to an eager crowd of investors, media, and others. However, what made these pitches unique was that they arose from startups founded and run by Ethiopian-Israelis, who are significantly underrepresented in Israel’s booming start-up scene.The event was hosted by the US Embassy in Israel and Tech-Career, an NGO that seeks to promote Israelis of Ethiopian decent into the high-tech marketplace. Tech-Career received a $75,000 grant from U.S.-Middle East Partnership Initiative (MEPI) Program, which allowed the organization to “incubate” three start-ups run by Ethiopian-Israelis from 2015-2016. The program provided mentorship and guidance from industry leaders to the fledgling start-ups.Naftali Avraham, a CEO of Tech-Career told The Jerusalem Post that the organization is seeking to give young Israelis of Ethiopian descent the tools and resources necessary to succeed in tech careers. “We want our graduates to succeed,” he stated. “The hope is that our graduates will continue to improve the status of the Ethiopian community so that our children will grow up in a better place in the Israeli society and the Israeli society will see our accomplishments.”At Thursday’s event three start-ups pitched their ideas. Among them is Za-Atoot, which created an online marketplace for parents to exchange baby clothes and products. Tal Akalo, who is part of the start-up’s three-member team told the Post that the idea came after they realized how quickly children grow out of their clothes, forcing families to waste perfectly good clothing.“It is extremely important that there is an organization that works with the Ethiopian community to integrate into high-tech,” Akalo said, “Because there are just around 400 working in the field.”The other startups included My Business Helper, which provides management software to small-businesses, and Service Locater, an application that enables users to locate plumbers, electricians and other services through GPS location and request the service immediately.According to Tech-Career data, only four people of Ethiopian descent worked in Israeli start-ups when the NGO was established in 2002. That number has grown to around 400 and Tech-Career has trained 650 men and women to enter high-tech fields.Thomas Genton the Counselor for Press and Cultural Affairs at the U.S. Embassy in Tel Aviv told the Post that the MEPI program seeks to further pluralism in Israeli by providing support and outreach to marginalized groups in Israel. “The goal is to demonstrate opportunities,” he said, “In high-tech Israel offers an competitive advantage and a place where all of these communities can contribute… A truly pluralistic and participatory society makes Israel stronger.”Besides working with Ethiopian-Israelis MEPI has also partnered with Hardei groups, Arab-Israelis, and others.The event comes at time when racism towards Ethiopian-Israelis is an issue of national concern. Police Commissioner Insp.-Gen. Roni Alsheich’s caused uproar in the Ethiopian-Israeli community when he stated that it is "natural” for police to be suspicious of Ethiopian Israelis and Arab-Israelis. Alsheich said the police had acknowledged the problem and are seeking to it. “It’s ‘natural’ for the Ethiopian community to be in start-up,” one entrepreneur stated to heavy applause and laughter.Avraham told the Post that working to improve the status of the Ethiopian community in Israel in sectors like high-tech is the “real answer” to racism the community faces. “We are making a change in Israeli companies not for me and not just for the Ethiopian community but for the benefit of the entire Israeli society.”