Man banned by judge from FB for incitement, switches to WhatsApp and is rearrested 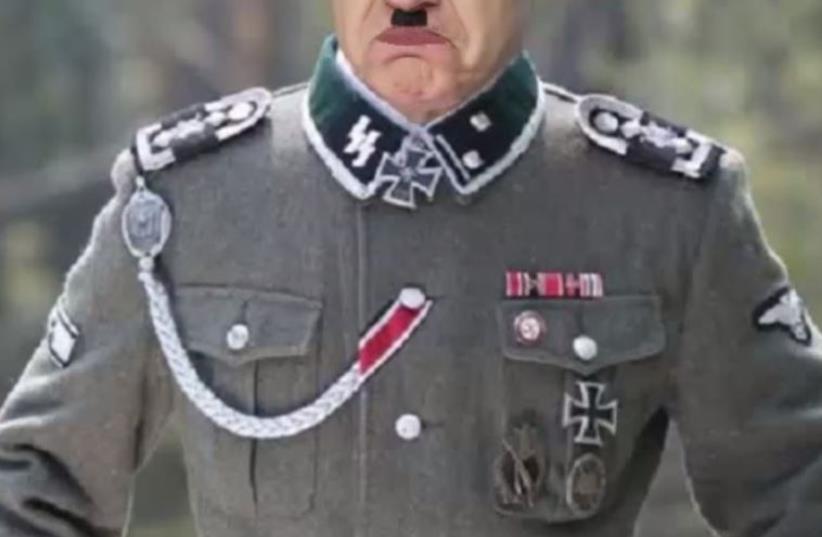 Screenshot of video uploaded to Youtube showing Netanyhau in Nazi uniform
(photo credit: YOUTUBE SCREENSHOT)
Advertisement
The State Attorney's Office ordered a criminal investigation against suspects believed to have uploaded videos to YouTube showing President Reuven Rivlin and Prime Minister Benjamin Netanyahu wearing Nazi uniforms and speaking in German. The investigation will be carried out by the cyber unit of the Israel Police, which on Sunday opened an investigation into online incitement against Rivlin, following his statements condemning violence and hatred after the Jerusalem Pride Parade stabbing attack and the murder of a Palestinian baby killed in a firebombing in the West Bank Thursday night, believed carried out by Jewish extremists. In a separate incident, a man arrested last Friday and banned from Facebook for writing a post praising the pride parade attack was rearrested on Monday after he sent out another post on WhatsApp in which he expressed joy at the passing of a teenage girl who was stabbed during the attack.The man, Gilad Kleiner of Kiryat Malachi was released last Friday with the condition that he stay off Facebook for the week. The judge’s condition did not include WhatsApp, so on Sunday afternoon he sent out a text to around 100 friends on WhatsApp in which he said “I was very pleased to hear this past hour about the passing of the stabbing victim from the abomination march held last Thursday.”Kleiner’s message then says how he was pleased because he felt so bad for the attacker Yishai Schlissel, saying that he was set to go away to prison for many years “without even succeeding in killing a single one of these perverted souls.”Klenier, the son of former Herut and Likud MK Michael Kleiner will be brought to the Ashkelon Magistrate’s Court on Tuesday, where he is expected to receive further restrictions on his release.On Sunday afternoon, 16-year-old Shira Banki succumbed to her wounds suffered during the attack, during which Yishai Schlissel stabbed six people a decade after he went on a stabbing spree at the Jerusalem Pride Parade and a few weeks after he was released two years early from his sentence for that crime.