The Afula Market Compound, nestled on the outskirts of the city, covered from the sun and open to the breeze, has been mostly empty since it was built 15 years ago. 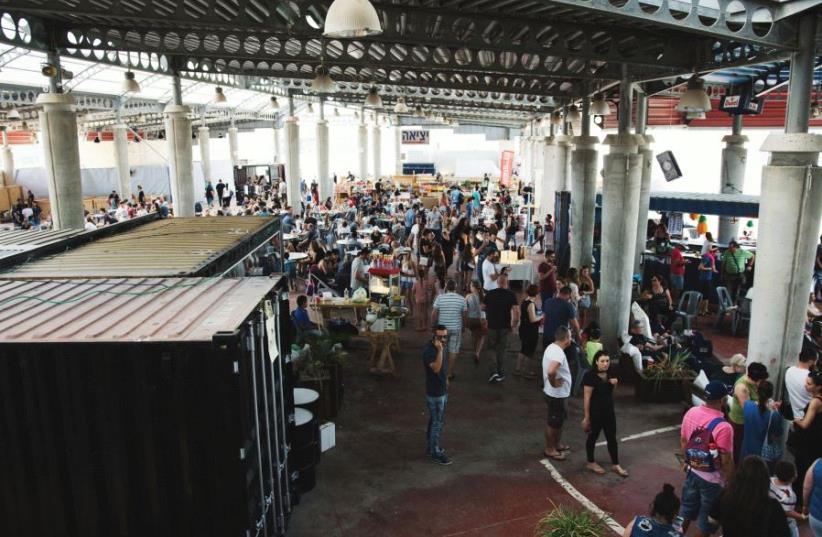 The Afula Compound
(photo credit: LIHI WOLF)
Advertisement
Live music is playing, beer is flowing, fresh food is being fried, grilled and baked, and thousands of people of all ages are enjoying themselves. It is not a sight you would expect to see on a Saturday in the sleepy city of Afula, but thanks to Yuval Alterlevy and Oshri Akuka and their company Maoz Harel, it is a scene northern Israel can get used to.In a play on words, birat ha’emek means both “beer of the valley” and “capital of the [Jezreel] Valley.” Afula is home to about 45,000 people, and has been slowly growing. With a bevy of new luxurious apartments, a future high-tech hub and a planned “first station” that will rival the ones in Tel Aviv and Jerusalem, this small town is slowly putting its self on the map.The Afula Market Compound, nestled on the outskirts of the city, covered from the sun and open to the breeze, has been mostly empty since it was built 15 years ago. Besides vegetable and fruit vendors that never quite filled the vast space, nothing was happening there.About two years ago the Afula Municipality decided to make something of the mostly abandoned compound. Alterlevy, Akuka and their company Maoz Harel Ltd. won the rights to turn the place into the vibrant market it is now becoming.Alterlevy sat down with Metro to discuss how the revived Afula Market and events such as Saturday’s Beer Festival were born.“Residents and people in the region didn’t have a place to go enjoy themselves,” he explained. Originally from Afula, he was familiar with the city’s need for an all-inclusive place where people could meet to have fun.The duo, who are world travelers, used their experiences as inspiration.Markets around the world inspired the two to bring a similar meeting place to Israel – central meeting point that features food, vendors, drinks and music as well as a Gymboree for the kids.“We tried to bring an international flavor here,” Alterlevy explained.With vendors selling items from small custom-made, modified containers, local artists have the chance to open up shop and test the market without needing to invest in a pricey storefront location.Artists can open “pop-up shops” for as short as three months.The compound already has a greenhouse that runs Sunday through Friday.The list of restaurants in the works to open is seemingly never ending, from Thai food to American diner food and a bevy of kosher options.The summer will bring a variety of events, including late night markets and even a used car sale.On Saturday, May 13, the focus was on the beer. The music was flowing and the people were mingling as the compound opened its door to the third monthly Beer Fair. With the help of Alex Nezneski, who has experience bringing festivals full of beer to sleepy towns, the compound was transformed into a fullday party, with people arriving from all over the country to enjoy the fun.Nezneski has plenty of experience in bringing parties to small towns in the middle of nowhere. Once a resident of central Israel, he met Alterlevy and Akuka through a mutual friend and shortly afterward the festival was born.It all happened rather fast; Nezneski moved to Afula just three months ago.“I moved here and within one month we already had the [first] beer festival,” he explained. It was the group’s third festival, he added.He already has another festival in the works at the Azrieli Mall in Givatayim, this month.Nezneski also explained some of the other events that he helped to plan, including a Reggae Party the night before we spoke.The beer event featured more than 40 different types of beers, including boutique Israeli beers, such as Dracula and more well-known breweries such as Negev. Beers from around the world included America’s popular Blue Moon.With drink deals such as NIS 47 for three beers and a NIS 7 discount for Afula residents, students and soldiers, guests had the opportunity to sample much of the wide variety that was offered.Live music from local Israeli talent provided the soundtrack, with performances by Yogev Haruvi – Drum & Didge, The Bench, La Kombina and SHTUBY.The beer festival, like most future events are planned to be, was free.The goal, Alterlevy explained, was to enable as many people as possible to enjoy the events.Reut Avram, who lives near Afula, arrived with her friend who had come all the way from Ra’anana. The two 22-year-olds had heard about the event on Facebook.It was the first Afula Market event for both of them and both agreed that it filled a much-felt void in the region.If you want to join in on the fun, the next festival is on June 16, starting at 2 p.m., at 7 Hahashmal Street, Afula. For more information: www.Afula-market.co.il