Supreme Court Judge David Mintz was driving in his car near his home when the attempted assault occurred. 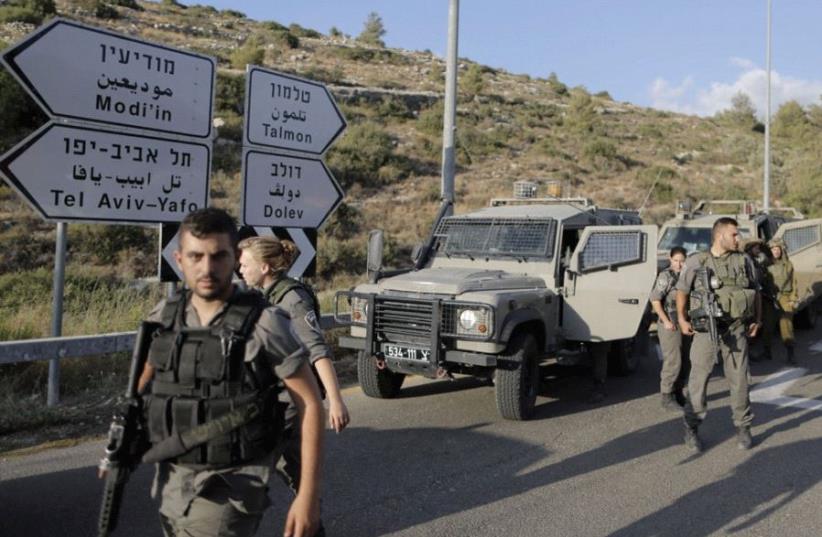 BORDER POLICE officers search the area around the settlement of Dolev after the shooting attack of Danny Gonen in June 2015.
(photo credit: REUTERS)
Advertisement
Supreme Court Justice David Mintz was the target of an attempted attack near the Dolev settlement in the West Bank on Monday morning.Police said they had received a report from a resident of the Binyamin area who was driving his car on Route 463 at Haparsa Junction near Dolev, when a Palestinian vehicle blocked him and three people exited the car. They then allegedly approached him holding hammers at which point he fled.Mintz, who lives in Dolev, was reportedly on his way to work when the incident occurred.Police opened an investigation into the incident.Bayit Yehudi MK Moti Yogev reacted to the incident saying: “As a resident of Dolev and West Binyamin, I can say from my experience that in recent months there has been an upsurge in Palestinian violence.”He related that last week, in the middle of the night, he encountered a barrier of burning tires on Route 465, an incident which he said ended in the theft of a vehicle. Expressing relief that Mintz extracted himself from the situation, he added, “I trust that the security establishment will learn the events and provide the appropriate security response in Judea and Samaria.”He also expressed hope that the incident would encourage the justice system to give harsher punishments to terrorists.In another reaction from the Bayit Yehudi Party, MK Shuli Mualem-Rafaeli demanded that Defense Minister Avigdor Liberman “restore security to the roads of Judea and Samaria.”“Stones and Molotov cocktails are part of the daily routine of the residents of Judea and Samaria. I too have been attacked in the past by Arabs with stones. Unfortunately, this reality does not interest the media as long as it is not about tragic results or a senior personality such as in today’s incident in the attack on justice Mintz,” she added.

Anti-Israel harassment is antisemitism, too By EMILY SCHRADER
The haredim within Israel’s democratic society - analysis By SUSAN HATTIS ROLEF
Progressive Judaism won’t surrender to the ultra-Orthodox in WZO - opinion By ERIC YOFFIE