Surviving the Shoah in North Africa

Student group-local bar partnership brings recollections of the Holocaust in Tunisia and anti-Semitism in Iraq to Jerusalem. 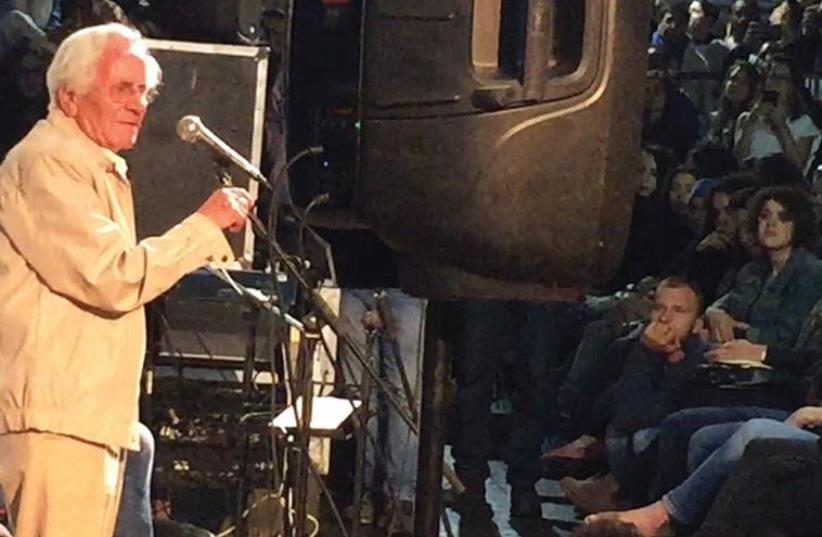 TUNISIAN HOLOCAUST SURVIVOR Yigal Halamit speaks to a crowd in Jerusalem’s Mahaneh Yehuda market about the Holocaust in Tunisia on Wednesday night
(photo credit: SETH J. FRANTZMAN)
Advertisement
Yigal Halamit was 10 years old and living in Tunisia when France fell to the Nazis in 1940. Even before German officers arrived in North Africa with Erwin Rommel’s Afrika Corps in 1941, the French collaborationist Vichy regime had already set out to strip Jews of their rights.“The democracy we had and the republican ideals would be no longer, a new French regime arose of anti-Semitism. First they said it would be illegal for Jews to study to be doctors or to treat non-Jews, and there were many other discriminations,” recalled Halamit in a speech to 300 people gathered in Jerusalem’s Mahaneh Yehuda shuk on Wednesday night.The event in the market was part of a wider Israel-wide program of Zikaron ba-salon (Remembrance in the living room) which hosts survivors and special events to discuss personal stories of the Nazi genocide on Holocaust Remembrance Day. The initiative to invite Halamit was the brainchild of Libi Bamizrach, a student group at the Hebrew University of Jerusalem that focuses on highlighting the culture of Jews from the Middle East, and a bar called Tahrir in the shuk. “Tahrir” is an Arabic term for liberation.Holocaust Remembrance Day in Jerusalem is mostly a somber affair. Shops close and the light almost seem to dim as people stay home and watch TV programming focusing on genocide.In Mahaneh Yehuda almost all the shops were closed. Outside Tahrir a loudspeaker had been set up with a few hundred chairs. It wasn’t enough to accommodate the mostly young crowd, some in uniform, some with yarmulkas, who gathered to participate in the event. They were eager to learn firsthand about how the Holocaust affected Jews in the Middle East.Ziv Arbiv, a student of social work at the Hebrew University and member of Libi BaMizrach, was surprised by the larger than expected turnout.“It’s important to open people’s eyes and this is an important evening. It is a kind of awakening to remember [these experiences].” Along with Halamit, there was a discussion of the Farhud pogrom in which hundreds of Jews were killed in Iraq in June 1941.The goal of the evening was to illustrate that the Holocaust didn’t just happen in Europe. “It’s not to take away from what happened in Poland, but to show through this seminar what happened in North Africa and Iraq to lead to increasing knowledge and education about the experience of Jews there,” said Arbiv. The Farhud in Iraq, committed by Arabs against Jews, for instance, was heavily influenced by Nazi propaganda.Halamit recalled that some French police under the Vichy regime were zealous anti-Semites. However, the Vichy racial laws, segregating Jewish students and removing Jews from professions, were only the beginning.On November 8, 1942, American forces waded ashore in Operation Torch, the allied liberation of Algeria and Morocco. Jews in Tunisia thought the Americans would liberate Tunis, but 800 kilometers separated them from the nearest American GI. Instead, the 70,000 Jews of Tunisia were occupied by the Nazis.“There were military vehicles everywhere, all types of tanks, on Friday [German propaganda] said we were at war with international communism run by Jews,” recalled Halamit.Most of Tunisia’s Jews lived in Tunis and the island of Djerba. Halamit recalls that several thousand Jews were sent to forced labor soon after the Germans took over. “They had nothing to eat initially, because the law required that the Jewish community [provision] its own food for ourselves.”As a young boy of 12, Halamit says much was kept secret from the younger generation. But he recalls the waves of bombing of Tunis by allies, one in which 100 people were killed. Jews gathered in a shelter close to the center of the city.As the allied army inched closer to the city, Jews who had been deported to 32 labor camps the Nazis had set up around Tunis began to try to escape. “The Germans were not able to do to us what they did in Europe, they didn’t have a way to send [Jews] to Europe, and there was the war.”In the end the pressure of war saved Jewish lives. In May 1943, Tunis was liberated, but not before an estimated 80 to 120 Jews were killed. Halamit stresses that unlike in Europe, no Jewish children were killed.During his talk more and more young Jerusalemites crowded into the closed section of the shuk to hear.For young people in this generation there was an excitement to hear about a part of the Holocaust that is not usually discussed. For organizers like Arbiv the turnout was heart-warming.“It was impactful to see so many people, we didn’t expect it, and to talk about these issues in such a way, it was great. We hope to continue to do events like this in line with our organization’s goals of highlighting Mizrahi culture and experience.”