'The Last Sermon' is the brainchild of Jack Baxter and Joshua Faudem, both survivors of a bombing in 2003 at the Tel Aviv beachfront bar Mike’s Place that they were able to capture on film. 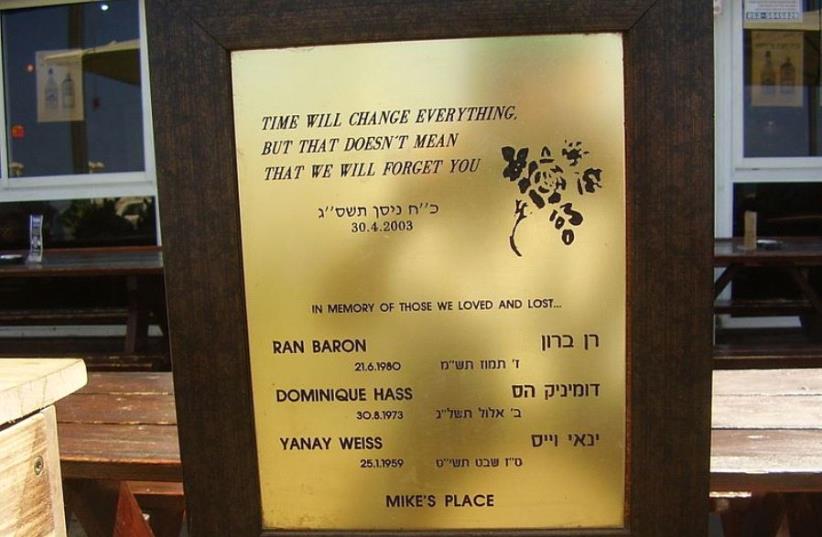 Memorial plaque to the victims of the "Mike's Place" suicide bombing that killed three victims in 2003
(photo credit: DR. AVISHAI TEICHER/WIKIMEDIA COMMONS)
Advertisement
“Thank you for joining us as we travel with Jack Baxter, Joshua Faudem and their crew on a journey that began for all of the wrong reasons, with a suicide bomb at Mike’s Place in Tel Aviv almost exactly 14 years ago,” Felice Friedson, the CEO of The Media Line and co-producer of The Last Sermon – a documentary in-progress and sequel to the 2005 Blues by the Beach, a film about the Mike’s Place bombing — said to a crowd of Israelis, Palestinians and Americans gathered in Jerusalem. Sitting with Baxter, Faudem and Friedson was producer Will Keenan.The guests at the town hall discussion, which was filmed for inclusion in the movie, discussed the question of religion and violence and offered perceptions that spanned the breadth of society itself. The movie is named for the Prophet Mohammed’s last sermon, spoken in 632 C.E., which Sheikh Maher Assaf, a religious scholar and preacher, read at the event. “Prophet Mohammed, peace be upon him says, ‘All you people, your God is one,’” the sheikh read. “He is the God of Muslims, the God of Jews, and the God of Christians and the God of Druse, and the God of atheists, the God of the world, of animals and human beings, the God of the sun and the moon, the God of everything in creation. Your father is one. We all came from one father and one mother.”The sheikh, who needed an Israeli permit in order to attend the event in Jerusalem, then chanted the verses in the traditional Qur’anic reading, called tajwid. “Religion and politics have been mixed together,” the sheikh said, speaking through a translator. “This dangerous cocktail has led to a dangerous interpretation of the religion. We are all called to have a new reading of religion, not just for Islam, and to remove the interpretations emanating from hatred.”The film is the brainchild of Jack Baxter and Joshua Faudem, both survivors of a bombing in 2003 at the Tel Aviv beachfront bar Mike’s Place that they were able to capture on film despite Baxter receiving serious wounds. The suicide bombers, both Muslim British citizens, killed three civilians and wounded 50. Baxter lay comatose for three days. “When I came out (of the coma) they put me in a room and the journalists in Israel came and asked me about the suicide bombing and my thoughts as an American about the people who had perpetrated the crime,” Baxter said in his gravelly voice at the Jerusalem event. “In the Qur’an there is nothing that states you should commit suicide by bombing someone and an Israeli reporter said ‘where does it say that and what does it say in the Qur’an?’ I had read the Qur’an but I couldn’t quote the Qur’an.”Baxter and Faudem’s Blues on the Beach won several awards; and in 2015, the pair released a graphic novel based on the events at the pub. The Last Sermon, however, is an attempt to understand the growth of radical Islam.Baxter explained that the project is driven by his belief that, “True Muslims are the key ingredients to defeat Islamist terrorism in the Middle East and around the world. Even as non-Muslims, Joshua and I are determined to provide the moderate voices of Islam in Europe the exposure and platform to amplify the final words of Prophet Muhammad – peace be upon him.”Faudem added that, “For me personally it is my journey to find the room in my heart for forgiveness. We are going all across Europe to meet with local communities, imams, activists, artists. At the end of this journey we’re going to London and we really hope to meet with the families of the perpetrators – the people who tried to end our lives. For me that is the essence of this journey. It is the final closure for me.”Click here for more stories from the Media Line