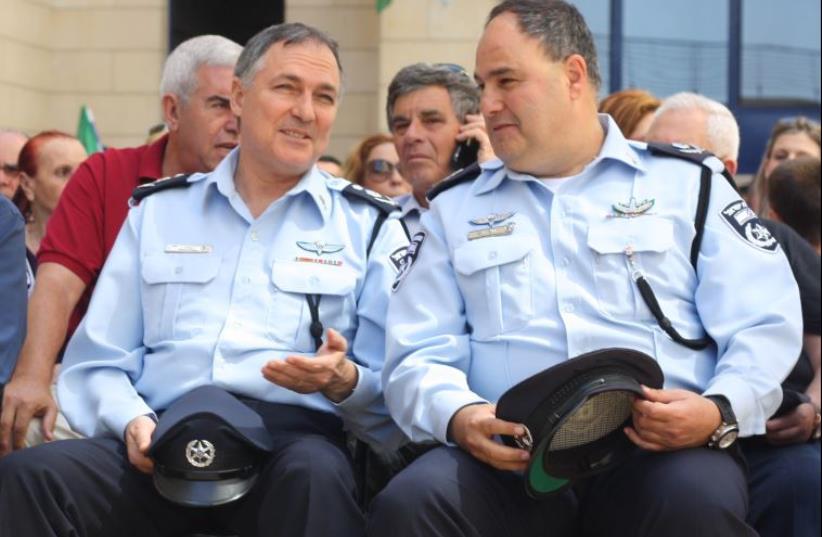 Yochanan Danino and Bentzi Sau
(photo credit: BEN HARTMAN)
Advertisement
Asst.-Ch. Bentzi Sau, the head of Israel Police’s Tel Aviv District, has been appointed acting police commissioner until a permanent inspector-general is selected, the police announced Thursday.Though the move had already been reported in the Israeli media earlier in the week, on Thursday Public Security Minister Gilad Erdan approved Sau as acting commissioner from July 1, when Insp.-Gen. Yohanan Danino retires.The move still requires approval by the cabinet, which is to vote on Sunday.If approved, Sau will serve in the position until September 1 or until a new commissioner is appointed.Danino made Sau his deputy in February, after assistant-chief Nissim Mor was removed from his post due to a sexual harassment investigation. Sau became Tel Aviv District chief in June 2013.Within days of taking the job, his district announced it had cracked the fouryear- old, Bar Noar gay club double-murder investigation.This soon became an embarrassment for the district, when the case fell apart and all three suspects were released without charges being filed.Before he became Tel Aviv chief, Sau served as the head of the Central District.He also served as the commander of the Northern District of the Border Police during the October 2000 riots, during which 13 Israeli Arabs were killed in clashes with police.MK Yousef Jabareen (Joint Arab List) called on Attorney-General Yehuda Weinstein to cancel Sau’s appointment, due to his involvement in the events of October 2000, in particular the use of sniper fire against Arab Israelis during clashes at the Umm el-Fahm junction. Jabareen said the decisions he made as a commander in October 2000 should disqualify him from being the Israel Police commander.In a letter to Weinstein on Thursday, Jabareen mentioned how Sau’s 2006 appointment to head the Public Security Ministry’s operations branch was rescinded by the High Court due to his role in the October 2000 events, and the fact that the Orr Commission set up by the state to probe the events ruled that he should be banned from promotion for four years.The NGO Adalah, which focuses on legal issues for Arabs in Israel, sent a similar protest letter to Weinstein on Thursday as well.