The announcement has caused some controversy among store owners, as some called for a boycott against the brand, while others have come out voicing support in it. 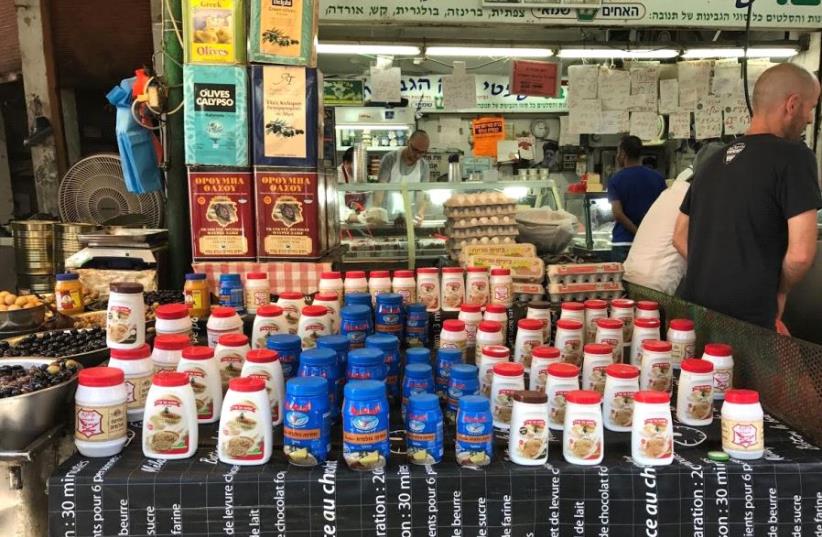 Karawan tahini (the blue jar) being sold alongside Al Arz tahini from Nazareth, and Yona tahini from Nablus at Tel Aviv's Carmel Market, May 19, 2017
(photo credit: ELIYAHU KAMISHER)
Advertisement
Tahini brand Al Arz has come under fire after announcing support for an LGBTQ+ emergency hotline for the Arab population, Walla reported. The hotline will be operated by the "The Aguda – Israel's LGBTQ+ Task Force" and paid for by the company. It will provide information and emotional assistance to LGBTQ+ Arabs in routine and emergency situations.The announcement has caused some controversy among store owners, as some called for a boycott against the brand, while others have come out voicing support for it. One store owner in the town of Tamra posted a video on social media where he told a company representative to take back the product as "no one wants to buy Tahini that supports gay people." Another store owner in Lod said similar things: "We're joining the boycott against the Al Arz Tahini due to its support of gay people."The Aguda, on the other hand, has expressed its support of the move, saying that "The Al Arz Tahini company has made a brave decision - to form with us a hotline to help the LGBTQ+ Arab population," The tweet read. "The initiative has caused a negative reaction online as well as calls for a boycott against it - do not let hate and incitement win!"


The head of the Joint List, MK Ayman Odeh, responded to the announcement as well, saying: "It's quite hypocritical to boycott Al Arz while allowing Israeli companies who pride themselves in the support of the settlements and the IDF?! How innocent are you to not analyze the Al Arz's competitors both Jewish and Arabic who promote this campaign?"Are those companies who now read these things on Facebook surprised by how easy it is to catch us like that? How abusive it is to create conflicts when we're on the verge of many patients about to die due to the coronavirus and many others who will go hungry due to the government's priorities regarding the virus," Odeh added. "We have important issues ahead of us, we need to be united in order to deal with them."